How to Protect Your Small Dog from Eagles 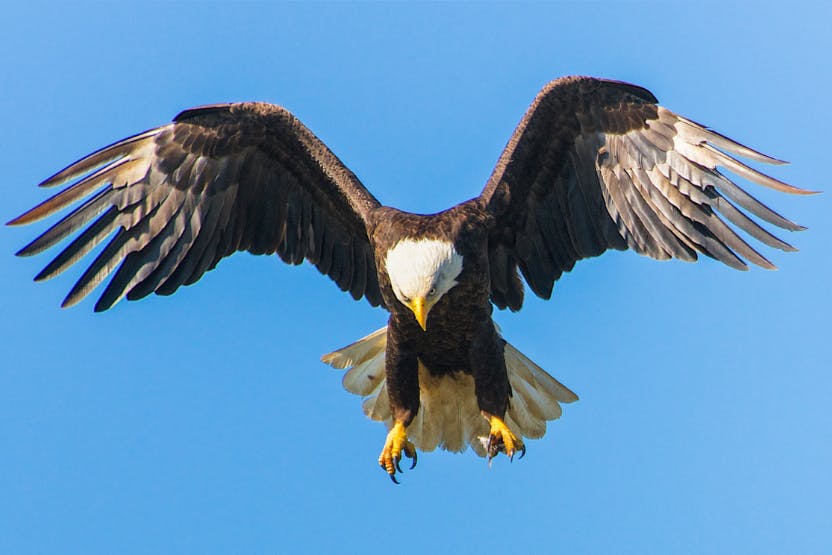 Pet parents often worry about their fur-babies coming in contact with spiders and snakes but rarely consider attacks from above. Eagles can be just as dangerous for small pets as venomous reptiles and arachnids.

An eagle’s razor-sharp talons can impale prey with 400 pounds of force per square inch. If that wasn’t concerning enough, eagles reach speeds of over 100 miles per hour when diving, which means an attack can happen in an instant.

In recent years, populations of eagles have made a remarkable resurgence, especially bald eagles. And while most everyone is glad that our national symbol is making a comeback from the endangered list, this could spell bad news for small pets. In 2020, a Westminster show dog was killed by a bald eagle.

So, what can you do to protect your small dog from eagles? We'll discuss preventative measures you can take and what to do if a predatory bird attacks your pet.

What type of eagles attack dogs?

Two types of eagles are known to attack small dogs in the US: the golden eagle and the bald eagle. Bald eagles mainly dine on fish and smaller birds but occasionally go after bigger prey when hunger strikes.

On the other hand, the golden eagle is much larger and less discriminatory, occasionally taking down sizable prey like calves, deer, and lambs. Immature eagles in particular are prone to attacking animals that are too big for them due to poor judgment and underdeveloped hunting skills.

Bald eagles aren't as large or as strong as golden eagles and are only able to comfortably carry about 4 pounds while flying. However, with the right wind conditions and positioning, bald eagles may be able to carry more weight than usual. Dogs weighing less than 10 pounds are at the highest risk of falling victim to an eagle attack.

Where do predatory eagles live?

Bald eagles inhabit every US state and sometimes migrate in the colder months. Golden eagles primarily live in the western US, and most live there year-round. However, some populations in colder climates (like those in Alaska) migrate during the winter months. It’s not unusual to spot migratory golden eagles in the eastern states.

Signs of an eagle attack in a small dog

Eagle attacks happen fast — so quickly, in fact, that pet parents may have no idea what transpired. Below are some signs of an eagle attack in small dogs:

Treatment and prognosis for an eagle attack

The treatment and prognosis for an eagle attack will depend on the severity of the encounter. If the dog escapes with only puncture wounds, the prognosis is good. However, the dog may require stitches to close the wounds and antibiotics to prevent infection. Pets who have lost a lot of blood due to a bird attack may also need a blood transfusion.

If an eagle drops your dog mid-air, your pet could suffer broken bones, concussions, or organ damage on impact. Treatment for these falls range from a simple cast to surgery to repair broken bones and internal bleeding. The prognosis for falls due to an eagle attack depends on how the dog lands and how far they fall.

Vet costs for an eagle attack

The exact vet costs for an eagle attack depend on the treatment your dog will need and your location. Here are some cost estimates for common treatments associated with eagle attacks in dogs:

Paying for emergency vet treatment can be a major financial burden.

Get a quote now

How can pet parents protect small dogs from eagles?

The good news is there are steps pet parents can take to prevent eagle attacks from happening. Below are things you can do to ward off predatory birds.

Smaller birds are a staple in an eagle's diet. Removing birdseed, suet blocks, and other food sources for small birds will prevent hungry eagles from scouting your property in search of their natural prey.

Get rid of hiding places

Field mice, small rabbits, and moles are also natural prey for the eagle. Keep your yard free of these little critters by eliminating their hiding places. Clear your yard of wood piles, debris, and scrap metal where small animals might seek refuge.

If your dog has an outdoor enclosure, it's a good idea to cover it to keep eagles and other predatory birds at bay. Some retailers offer special netting made specifically to deter predatory birds, but a large tarp and bungee cords can work just as well when secured correctly.

Buy protective gear for your dog

Protective gear like the puncture-resistant Raptor Shield may help prevent successful eagle attacks in small dogs. The smooth material is similar to bullet-proof glass and prevents birds of prey from being able to grip and puncture your dog with their sharp talons.

The makers of Coyote Vest also make a "hawk shield attachment" for their signature vest, which features puncture-resistant Kevlar that breaks away from the vest when a predatory bird attacks. The idea behind this design is for the bird to fly away with the vest attachment and give the dog time to escape.

Last but not least, supervise your dog's outdoor activities in areas where eagles are prevalent. Use a short, non-retractable leash for outside playtime, walks, and potty breaks. If you must leave your dog outside unsupervised, consider investing in a covered kennel so predatory birds cannot get to them.

What to do if an eagle attacks your dog

Eagle attacks on pets are rare, but you should know how to handle an attack should it happen to your dog. If an eagle seems to be scouting your dog, attempt to scare them away. Yell and wave your arms to frighten them into fleeing.

If an eagle is attempting to attack your dog, grab your dog (if it's safe to do so) and seek shelter. Once you get your pet to safety, examine them for injuries and contact your vet if needed.

Do not attempt to harm the eagle in any way since this is a federal offense. The Bald and Golden Eagle Protection Act of 1940 gives bald and golden eagles federal protection from harassment, harm, and capture.

Are you traveling to an area with a large eagle population? Consider getting pet insurance first. Pet insurance can help pet parents pay for unexpected illnesses and injuries (including eagle attacks). Our handy pet insurance comparison tool can help you find the "pawfect" plan for your pup.