Why Does My Cat Attack Me When I'm Hurt? 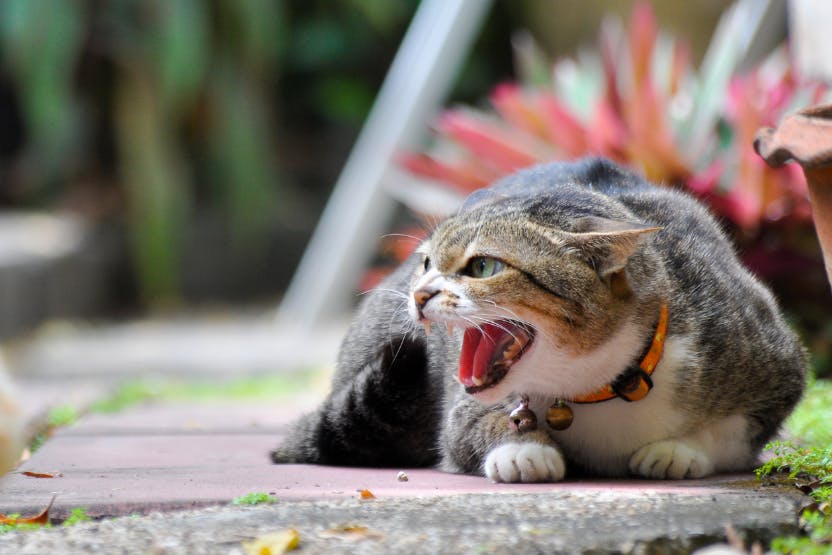 Say your cat is usually a laidback little lion — they sleep on your lap and beg for pets and cuddles. But when you shut your finger in a door or stub your toe and let out a yelp, your tiny tiger becomes a terror. For some reason, whenever you show pain, your cat tries to attack you. This is a more common problem than you'd think, with pet parents posting about the situation on social media.

"Unfurtunately", it's unclear why cats attack when their pet parents show pain. That said, there are plenty of potential reasons, as well as a few ways you can help prevent future furry kerfuffles. Here are a few "pawssible" explanations for why your cat attacks when you're hurt.

Your cat could be biting you out of a protective instinct. Your little lion may be treating you like one of their kittens by attempting to grab you by the scruff of the neck and carry you away from potential danger. Pet parents should remember that cats respond differently to stimuli, so trying to carry you off like a kitten may seem like the best course of attack.

Your cat may not be attacking you out of aggression but out of an instinctual need to protect their family. That said, if your cat seems to be attacking you forcefully and with defensive body language, your cat probably isn't being protective.

It's possible your cat attacks you when you're hurt due to fear aggression. Fear-based aggression is one of the most common forms of aggression in cats, with a large percentage of pussycats inheriting genes that make them shyer than other felines.

A cat's genetic makeup, mixed with poor socialization, can lead a cat to be extremely afraid of the unknown. So, when you show immense pain, it might cause your cat to become highly stressed and fearful, leading to aggression. Poor past discipline can enhance the risk of fear aggression.

So, one reason your cat is lashing out is that they're scared of you showing pain, and it triggers their fear aggression. You can try to resolve your cat's fear aggression by creating safe spaces where they can retreat when over-stimulated.

Additionally, you should build confidence through play and be consistent in how you interact with your cat. For example, do not yell or perform any physical punishment, as this will exacerbate your cat's fear and cause confusion. Clicker training can also be helpful to prevent fear aggression.

If your cat only attacks when you let out a yelp or a cry, it could be due to noise-induced aggression. A particular frequency can often elicit an aggressive reaction from a cat, such as a person singing, a baby crying, or a person screaming. Cats are easily overstimulated and can be triggered by noises in the same way they can by too much petting.

Next time you hurt yourself, stifle any screams and see if your cat comes to attack you. If not, they may be reacting to noise-induced aggression.

You can try to resolve the behavior by desensitizing your cat to your yelps. Record yourself saying your go-to pain response, and play it at a low volume for your cat. If your cat remains relaxed, give them a treat and some praise. Over time, raise the volume, and continue to reward good behavior and ignore negative behavior. Then, hopefully, your cat won't attack you next time you yelp in pain.

This is a pretty simple one: your cat is attacking you when you're hurt due to a lack of stimulation. Cats have a supercharged prey drive, meaning they need plenty of simulated hunting to stay fulfilled. Lack of stimulation is especially common among indoor cats who don't have the same hunting opportunities as outdoor cats.

You can try to resolve the problem by playing with your cat more and providing them with additional activities. Puzzle toys and training are excellent and fun ways to keep your cat occupied. You should also set aside at least 30 minutes a day in increments for one-on-one playtime with your feline. Providing your cat with more stimulation may mean they no longer attack you out of boredom.

Play aggression is also common among cats and could cause your cat to attack you when you're hurt. Many pet parents use their hands to play with their cats when they're kittens. As they get older, your cat will associate your body with play. Playing usually involves pouncing from a hiding place at prey, meaning they learn to associate your hands and feet with prey items.

Teaching your cat bite and claw inhibition is essential to avoid being injured by your cat. It shows cats how hard they can bite or scratch before causing pain and is key to socialization. Ensure you ignore and walk away from your cat when they bite or scratch you during play, and reward them for playing gently.

Over time, you can train your cat to understand bite and scratch inhibition; however, it will take some time and patience with adult cats. Once your cat has learned how to play gently, they should be less likely to attack you when you show pain.

Due to their own injury

If you can't figure out why your cat is randomly attacking you, take them to the vet. Your cat may have an underlying health problem that is causing them to attack aggressively.

Pain-induced aggression is more common among cats than you'd think. It could be due to anything from arthritis to gum disease. Resolving an underlying medical issue could prevent your cat from attacking you when you're hurt in the future.

Have any questions about your cat's behavior? Take out a wellness plan for your feline and chat with a vet 24/7 about any cat-related concerns.