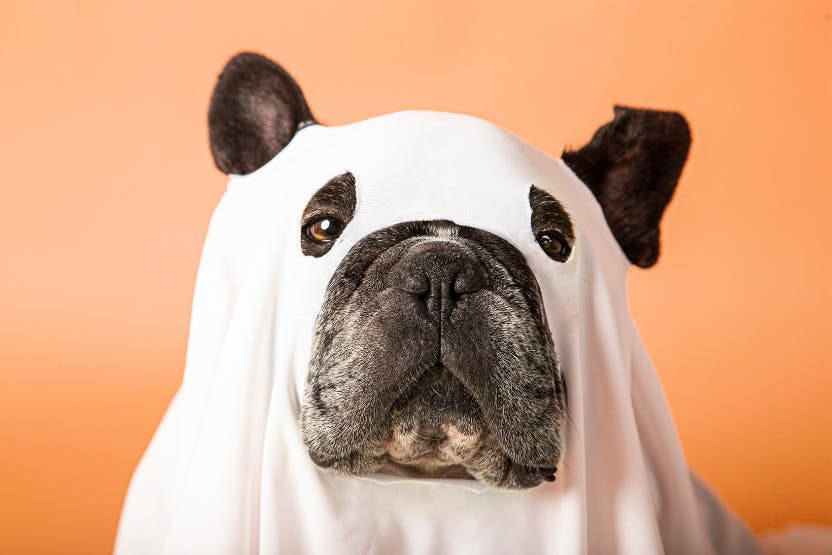 Spooky season is nearly upon us, and it's time to play dress-up with our felines and canines. We've rounded some of the best pop culture Halloween costumes for pets in 2022 so you and your frightening fur-baby can go trick-or-treating in style.

Remember, when dressing up your pet for Halloween, ensure they're comfortable. Otherwise, your furry friend might have a frightfully bad time! With that in mind, check out this list of furbulous pet costumes for Halloween 2022.

Is your mutt a bit of a maverick? Then dress them up as a pupper pilot from the new Top Gun!

Top Gun: Maverick is one of the year's highest-grossing films, and your fur-baby is sure to turn a few heads at any Halloween party in this trendy costume. This pet Halloween costume on Etsy is suitable for both cats and dogs. It's beautifully made and sure to leave your feline or canine looking like the coolest cadet this Halloween.

Related: 5 Halloween Movies to Watch with Your Cat

This year has been a big year for Star Wars TV series, with The Book of Boba Fett airing in early 2022 and the highly anticipated Obi-Wan Kenobi finally making its debut in May.

If the Force is strong in your furry friend, dress them up like your "favfurite" Jedi or Sith. Why not celebrate the return of Darth Vader by taking your doggo to the dark side with this adorable costume on Amazon?

A post shared by Brush It Off Props (@brushitoffprops)

Marvel and Halloween are a match made in heaven. With new films and TV series released every year, you'll never be short of pop culture Halloween pet costumes for your fur-baby.

One of this year's hottest Marvel franchises is Thor, with the new Thor: Love and Thunder debuting in June. The cast and crew of Loki also wrapped filming in July 2022, and the new season is set to release early next year. Pet parents with a mischievous mouser and a heroic hound should check out these Thor and Loki helmets on Etsy.

Lord of the Rings

The most expensive TV show ever made, The Lord of the Rings: The Rings of Power is sure to capture the imagination of any fan of Tolkien's original epic trilogy.

Celebrate the show's release by creating your own furry fellowship with these simple LOTR robes on Etsy. This costume is the perfect pick for any fur-baby that's fussy about wearing clothing.

2022 will always be remembered as the year Queen Elizabeth II, who reigned for over 70 years, sadly passed away. The Queen was well-known for her love of Corgis. She affectionately referred to them as "oversized potatoes" and is widely considered a pioneer of the breed.

Honor the Queen's memory in a way she would find amusing this Halloween by dressing up your Corgi as royalty. You can find some regal costumes for dogs on Etsy that are "pawfect" for this Halloween.

The cultural phenomenon that is Stranger Things churns out "pawlenty" of adorable and downright spooky Halloween costumes for people and puppers.

To celebrate the release of season 4, dress up your doggo in Steve's iconic "ahoy" outfit. Or, get devilish and dress up your pet like a "demogorkitty" or "demodog" with these simple yet effective pet Halloween costumes.

There are few more iconic slasher movies than the Halloween series, and this year, the nightmare's over with the release of Halloween Ends on October 14.

While Michael Myers might be hell on earth, you can dress your doggo up like this iconic character and they'll still look surprisingly sweet. This outfit is sure to be a"pawpular" choice for horror-loving hounds this spooky season.

2022 is a big year for the Pokémon franchise, with the release of a new style of game with Pokémon Legends: Arceus and the first ever open-world Pokémon games, Pokémon Scarlet and Violet, which are due in November.

Plus, there's no cuter Halloween costume for your pupper pal than your favorite Pokémon! Here's one of our favorites — a cozy Pikachu fleece made for Boston terriers, Pugs, and French Bulldogs.

This Halloween, take Elvis' hit single Hound Dog literally and dress your pup up like the King of Rock and Roll. 2022 saw The King back in the building, with Austin Butler's stirring portrayal of Presley in the new biographical musical Elvis.

You can find an impressive (and hilarious) Elvis outfit for your dog on Etsy, complete with a black pompadour and miniature guitar.

New Year's Day was the 20th anniversary of the release of the first Harry Potter film, Harry Potter and the Sorcerer's Stone.

As a special treat for all Potterheads, HBO hosted Harry Potter 20th Anniversary: Return to Hogwarts, bringing all our favorite people involved in the films back together. Dress your woofer up like your favorite wizard to celebrate the 20th anniversary with this simple Hogwarts robe costume.

Show us your fur-baby's Halloween costume on Instagram, and tag #wagwalking for a chance to have your photo featured on our feed!