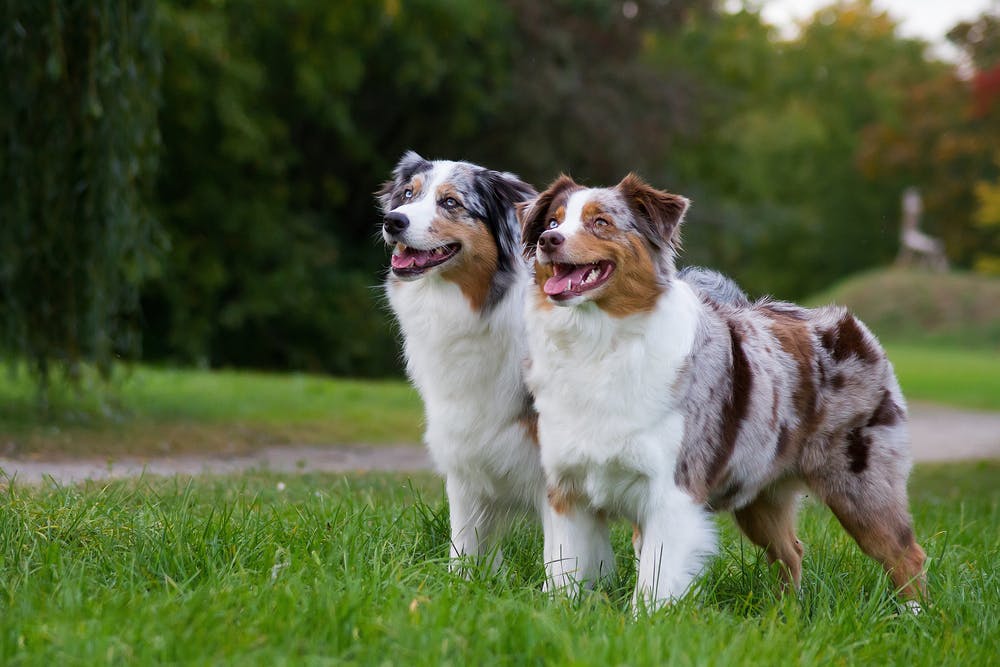 With a larger-than-life personality and cute looks to match, it's no surprise that the Australian Shepherd has so many enthusiasts around the world. Aussie lovers are so crazy about this breed that they declared January 22nd Australian Shepherd Appreciation Day, a day to celebrate this beloved (but often misunderstood) breed.

In celebration of Australian Shepherd Appreciation Day, we're bringing you 5 fascinating facts that are sure to make you fall even more in love with these adorable woofers.

There’s some debate regarding the breed’s origin

The origins of the Australian Shepherd are a controversial topic for the breed's many enthusiasts. There are 3 schools of thought on the Aussie's origins. Some experts believe that Australian Shepherds descended from the Spanish Basque Shepherd, while others think they're relatives of herding dogs imported from Australia (hence their name). The third school of thought argues that the Aussie is a uniquely American creation, born and bred in the American West.

Recent scientific revelations offer more insight into the origins and lineage of this breed. Information from breed genotyping leads scientists to believe that Aussies are closely related to UK sheepdog breeds, including the Border Collie, Shetland Sheepdog, and the Collie.

Scientists have hypothesized that the herding dogs imported from Australia were descendants of the Collie or Shetland Sheepdog. After many years of crossbreeding in America, breeders developed what we now know as the modern Australian Shepherd.

Parenting any dog is a big responsibility, but Australian Shepherds — especially young ones — come with unique challenges. This breed was bred specifically to herd and guard animals, and that’s their instinct. If you don’t give an Aussie a job, they will find one. When left to their own devices, Aussies may herd children or become territorial/possessive and guard their home or family members.

Australian Shepherds also tend to become destructive when they don’t receive enough mental and physical stimulation. To keep this breed on the straight and narrow, Aussie parents must provide their pet with plenty of stimulating activities and regular exercise. Aussies may need more obedience training than other breeds, but they're very intelligent and quickly pick up on commands.

The Australian Shepherd is susceptible to some genetic conditions

Half of all Australian Shepherds have a genetic mutation that causes severe and sometimes life-threatening drug reactions to certain antiparasitic drugs. This mutation, called the MDR1 gene mutation, can cause toxic levels of antiparasitic drugs like ivermectin and trifexis to build up in the nervous tissue, causing loss of consciousness, convulsions, and even death. The MDR1 gene defect causes sensitivity to many different medications, so it’s essential that Aussies undergo genetic testing before they start taking parasite preventatives.

The MDR1 gene mutation isn’t the only one that affects Aussies, either. A quarter of all Aussies born to 2 merle parents acquire the “double merle, lethal white” gene, which can cause various vision and hearing problems. Some dogs with the “lethal white gene” have such severe genetic deformities that they are born without eyes in their orbital sockets. Responsible breeders will not breed two merles together since this can cause severe health problems in the offspring and further promote gene problems if “double merle” offspring are bred.

The Aussie comes in many different variations

Aussies can have any combination of green, hazel, light brown, dark brown, or icy blue eyes. Many Aussies have a harmless genetic condition called heterochromia, which causes their eyes to be 2 entirely different colors. This gene can also present as multiple colors within a single eye, earning the breed the nickname “Ghost Eye Dog”.

The Aussie has many talents

It’s well known that Australian Shepherds make great family pets, but they are also hard-working animals that excel in the workforce. Due to the Aussie’s physical endurance, intelligence, keen nose, and trainability, these dogs are well-suited for a variety of jobs.

Aussies have long been used as ranch dogs to herd and protect livestock. This breed also excels at agility and has historically been used in the rodeo and in dozens of movies dating back to the early years of film.

Aussies also take to service dog training quite well and are ideal guide dogs, alert dogs, and emotional support animals. Though not as common in police work as German Shepherds, Aussies have made a name for themselves as detection, search and rescue, and cadaver dogs. What a resume!

Australian Shepherds are a one-of-a-kind breed with many talents and a truly unique look. This breed may need a little extra training and exercise, but the Australian Shepherd makes a fantastic pet and asset to the workforce when their needs are met.

If an adorable Aussie has stolen your heart, share them with us in the comments below!