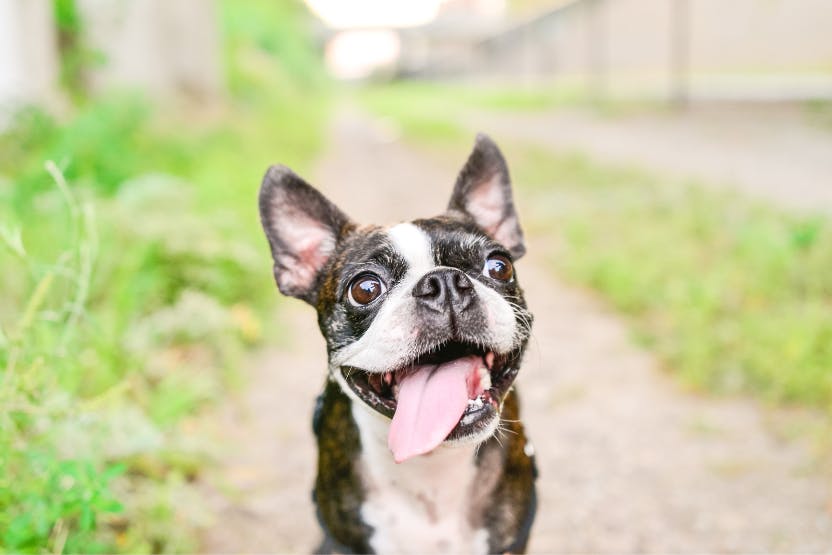 Boston Terriers are among the most popular terrier breeds, and it's easy to see why. Bursting with loyalty, love, and humor, Boston Terriers have been stealing hearts across the US for over a century.

To celebrate National Boston Terrier Day on February 19th, we've rounded up 5 reasons why we think Boston Terriers are the best, plus a few myths and fun facts about the breed!

From their all-American pedigree to their boisterous personalities, here are 5 reasons why we love Boston Terriers.

They're an all-American breed

Boston Terriers originate from (you guessed it!) Boston, MA, making them one of the only dog breeds to come from the US. They're also an old dog breed — Boston Terriers first appeared around 1875 and were recognized by the American Kennel Club in 1893.

Nicknamed the "American Gentleman" due to their black-and-white tuxedo coloration, Boston Terriers were America's first companion dog breed. They're also the state dog of Massachusetts.

Boston Terriers might be small in stature, but they make up for it with their bubbly personalities. Whether they're prancing around the dog park or reacting to a new experience, your Boston Terrier will have you giggling. Their big eyes and ears, combined with their high energy and hilarious behavior, make for an entertaining fur-baby.

Boston Terriers love human affection and get on well with children, making them an ideal addition to any growing family. They have a high prey drive, but as long as they're introduced early, they can get alog well with cats and even rabbits. Plus, their high intelligence and easygoing nature make them suitable for first-time pet parents.

They're a small breed that loves to stay active

Look no further than a Boston Terrier if you're looking for a small dog to take on outdoor adventures. Boston Terriers are relatively high-energy and require at least an hour of daily exercise. Despite weighing a maximum of 25 pounds, Boston Terriers love to get out and explore the world — ideal if you're big on hiking but short on space at home.

Related: How Much Exercise Does My Dog Need?

Boston Terriers are one of the lowest-maintenance terrier breeds. They have short coats, meaning they don't need to visit the groomers. You'll only need to brush your Boston Terrier around once a week.

Worried about your pup upsetting your neighbors? Boston Terriers are unusually quiet dogs, with a low woof instead of a noisy bark. They're not as stubborn as many terrier breeds — their high intelligence and loyalty make them easy to train.

Time to bust some common myths about this beloved breed!

Boston Terriers aren't built for outdoor living. Their short coats and short muzzles mean they don't handle extreme temperatures well, and they often struggle to breathe if left out in the heat.

As they're small and quiet, many people think Boston Terriers aren't protective. However, they're incredibly loyal and become very attached to their pet parents. Socialization from puppyhood is essential; otherwise, they may bark or become aggressive toward strangers.

Myth #3: Boston Terriers don't live as long as other breeds

Boston Terriers are a brachycephalic breed, and they're prone to health problems like patellar luxation. Due to these health issues, many people believe Boston Terriers have a short lifespan. But, if cared for properly, Boston Terriers live on average for 11 to 13 years — as long as German Shepherds, Huskies, and Beagles.

Do you have an adorable Boston Terrier in your fur-family? We'd love to meet them! Share your snaps in the comments, or on Instagram @wag!

Boston Terriers are a great breed to consider if you're looking for a loving, low-maintenance, and easy-to-train companion for your family.They are known for their playful and loving personalities, and intelligence.https://dogregion.com/