www.Instagram.com/ATLPetLover to view interactions. I have always loved animals as a child and would often bring stray dogs home and care for them; as I was an outcast kid/teen with little to no friends. Ever since I can remember I have always had some type of animal. From dogs, birds, crawfish, hamsters, rabbits, geico, and a few turtles; even camels. My recent experience with 2 displaced cats (Bob)-Tabby & (Cali)-Calico is what changed my entire life and connection with animals.

“Love can be found at the end of the leash”

Dog lover and number one humane society helper. Love to walk is my favorite exercise. Had dogs and animals all my life.Your dog will be in good hands.

I'm Karen and I have had dogs as pets throughout my life. One of my favorite activities is dog walking, both my own dog and the dogs of my friends. There is something very satisfying to see a dog's tail wagging with enjoyment as they get ready for their walk and then continue wagging their tail as they complete their walk!

hello!bonjour! I am Valerie, I am from Belgium and lived here since 6years . I have experience with dogs since I was young.During my first year of work, I shared a house and gave love and caring to 2 wonderful friends ( an Akita and a Shiba Inu. In USA, I started dog walking for neighbors and I am looking forward to meet your baby !

Can run with dogs, Dogs who pull, Puppy care

“Dedicated,vigilant walker with attention to detail”

Hi! My name is Luis and I just love dogs! They always bring a big smile to my face. I've been a walker for 2 years. I grew up with a cocker spaniel named Lulu and we always had other pets like fish, birds, rabbits, etc, so I know how important it is to care of our animal family members to keep them happy and healthy. I grew up in Atlanta, so I am very familiar with different neighborhoods in town and best routes to take. I love the outdoors, and can't wait to spend some time with your cute pup!

My name is Kelly, and I love dogs! I have owned dogs all of my life and I am experienced with all breeds big and small. I am very flexible and can help you with all of your pooches needs. I am currently a biology major at Kennesaw State University and when I graduate I would like to work with animals.

Hello there I am an an avid animal lover. I grew up with just about every animal imaginable. My best buddy was a Shar pei named Cocita that I lost this past year. Looking forward to getting back out with other dogs. I’m excited to meet & walk your furry friend!

“I have deep love and compassion for all animals.”

Hello! My name is Janet and I am a huge dog lover! I simply cannot get enough of them! I have rescued many dogs and have even had success finding their rightful owners. I am comfortable with dogs of all sizes and am very patient with dogs that show anxiety when meeting me. I sit for dogs while their owners are away and enjoy bonding with them. I will love your precious pooch as if he/she were my own.

Thomas strives to provide the best dog care experience in every service. He’s known for providing stellar care skills armed with time-tested expertise. He adheres to the love and care standard set by you. You can guarantee his reputation backed and memorable care for your beloved canine(s) by three steps: 1. Review his profile with >1K services! 2. Ask your dog(s) for opinion 3. Booking him!

“Excited to care for your fur baby!”

Hello everyone! My name is Taylor. I absolutely love animals. I grew up riding horses, raising chickens, and playing with the dogs. I have a rescue puppy of my own, and it has been such a joy watching him grow up. I look forward to meeting you and your pup!

The city of Austell, Georgia was incorporated back in 1885. It is named after General Alfred Austell who was the general that led the way for railroads to come into the Southern states. Today, it's part of the Atlanta muttropolitan area, which means it's close to the comforts of the big city but remote enough that its residents can enjoy a quaint, country lifestyle.

Austell is home to a beautiful, scenic trail as well as several furrific dog-friendly restaurants for you and your pal to enjoy. No matter what you're craving, you're sure to find something you like at one of Austell's Fido-friendly eateries. These include a few chain restaurants as well as some family-owned spots where you and your hound can chow down!

Austell doesn't have any dog parks of its own, but since it's just a hop and a skip away from Atlanta, you're never far from dog-friendly fun! You can find a wide variety of dog-friendly restaurants, parks, hotels, and activities within a 30-minute drive of town.

The pawesome location of Austell, Georgia keeps you in the center of dog-friendly activity!

The East-West Connector runs through the northeastern part of Austell, and it's where you'll find many of Austell's restaurants. If you're just passing through, you can take advantage of one of the many drive-thrus in the area. Or, if you're looking to enjoy a sit-down meal with your doggie dinner date, paw on over to Italian Oven! Craving something a little more exotic? Pollo Tropical is a great place to enjoy some Caribbean style dishes with your best furry friend. Leashes and good behavior are required at both establishments, which welcome dogs at the outdoor seating areas. Bone Appetit!

Do you and your pooch enjoy the outdoors? This neighborhood has just the place for you! The Silver Comet Trail is a wide paved trail that stretches for 61.5 miles. It is a fairly easy trail to walk and has some gorgeous scenery along the way, as well as plenty of new things for your four-footed pal to sniff and explore. This trail is part of the Rails-To-Trails program and used to be an old rail line. There are several amenities available along the way, such as restrooms, places to sit and rest, water fountains, and plenty of shade. Grab your pet’s leash and head out for a fun-filled day on the trail! 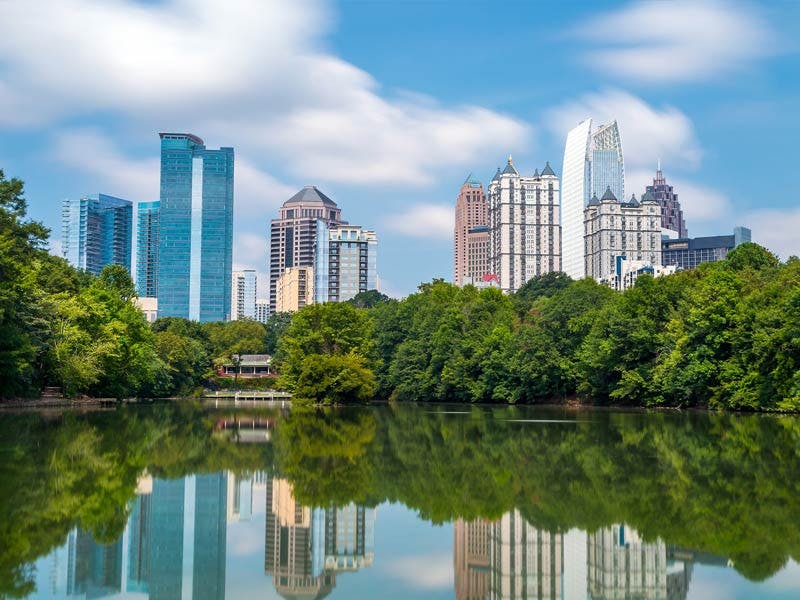 This neighborhood is located right in downtown Atlanta, just 18 miles from Austell. It has a great off-leash dog park for you and your pooch to enjoy. You'll need to keep your pup on a leash while entering and exiting the park. There's plenty of room here for your pooch to run around and enjoy playing with other canine friends. There is a small, separate area for the smaller breeds and shy dogs to play. The surface is mainly dirt and wood chips, and you'll also find plenty of benches to rest while your best fur-iend plays. You will need to bring water and supplies for cleaning up. Something to keep in mind that there is not a lot of shade at this park. 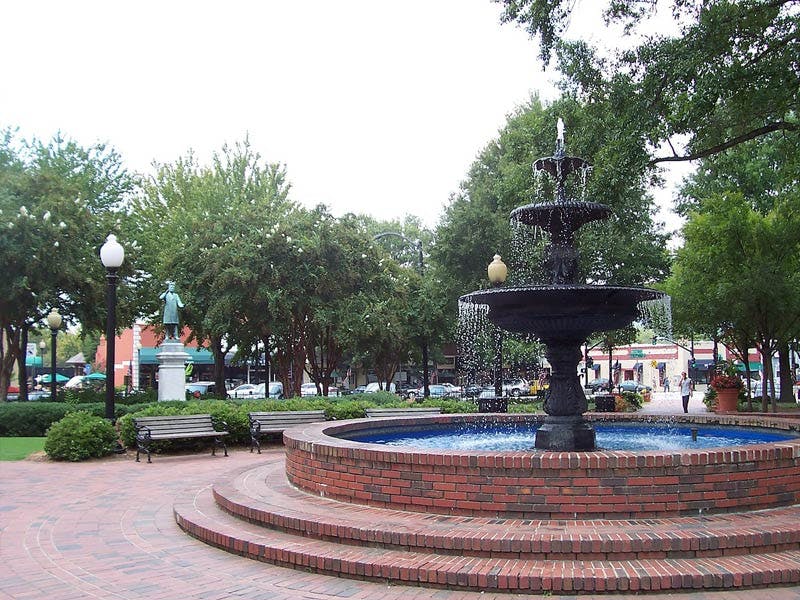 This puptastic neighborhood is a great place to get in some exercise for your pooch. It is located 12 miles from Austell, Georgia and is home to the Lewis Dog Park. This fenced, off-leash park has more than enough room for your pooch to run and play. Like most dog parks, this park features two separate, fenced sections for small and large dogs. There is not a lot of shade, but the park provides 3 covered picnic tables and a water fountain designed for humans and canines. Waste baggies aren't provided here, though, so you'll need to bring your own. 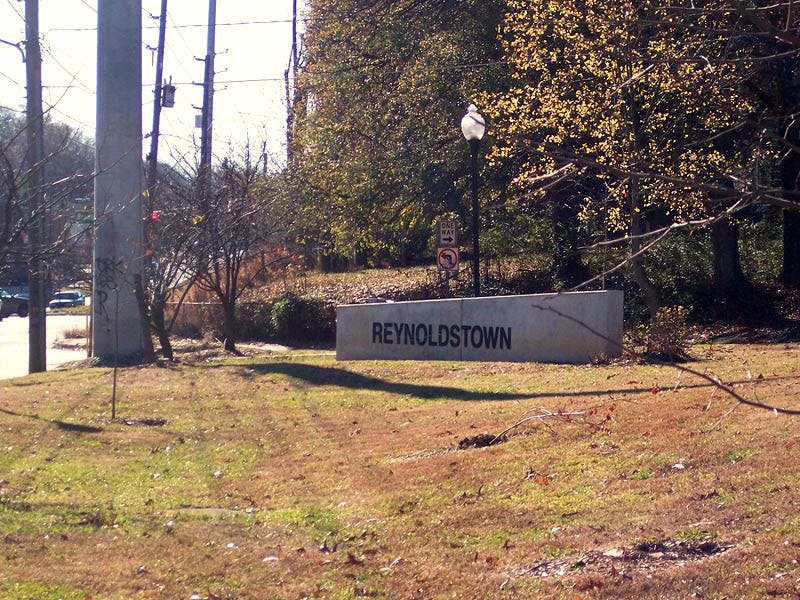 If you and your pooch are looking for a fun-filled day together, the Reynoldstown neighborhood in Atlanta, Georgia is the pawfect place for you! It's home to ParkGrounds, a unique dog-friendly coffee shop with an on-site dog park. While your furry friend is running off some energy in the dog park, you can fuel up with your favorite hot beverage and take advantage of ParkGrounds' complimentary wi-fi at the shaded outdoor seating area. Water bowls and waste clean-up supplies are provided. Just note that all dogs play in one fenced area here; there are no separate sections for small and large breeds.