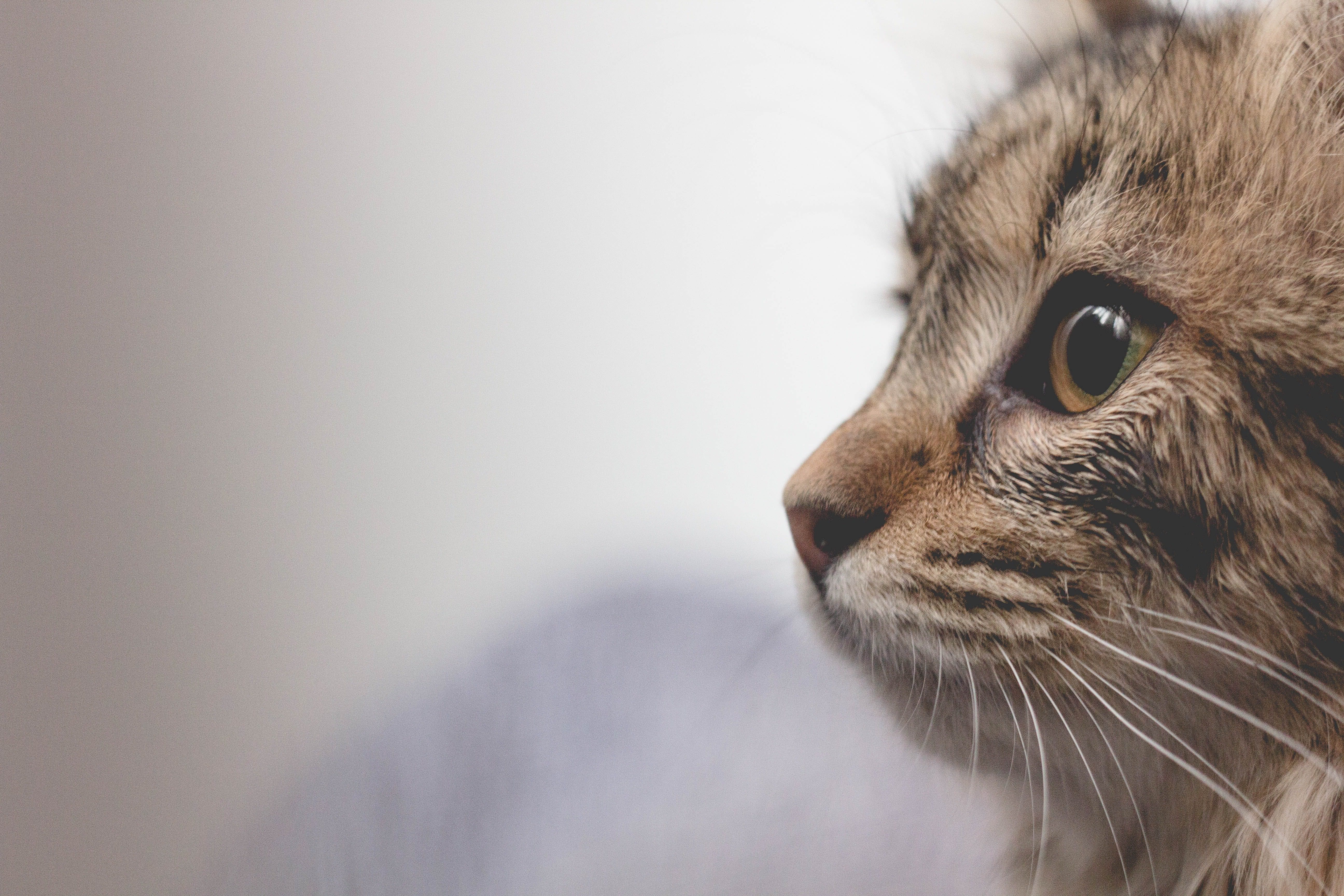 The eyes are often the first thing we notice when we meet a cat. Their intense gaze can tell us a lot about their mood, and in some cases their health. Rapt stares might indicate fear, a challenge, or affection.

As in humans, cats can experience eye problems that arise or worsen with age. Most felines cope stoically, and we may not notice immediately when something’s wrong. Eye problems in older cats may progress to partial or complete vision loss if they’re not treated. We’ve compiled the top 5 most common eye problems or conditions in our senior cats that we should be aware of to help you keep tabs on your furry pal.

Lenticular sclerosis makes the lens at the front of the eye bluish-gray, but it remains transparent, so Fluffy can still see. The hazy change typically begins when the cat is middle-aged, progresses through old age, and is considered a normal part of feline aging.

Cats with lenticular stenosis often eventually form cataracts in the eye’s lens as well. To the untrained eye, they look the same, but they are different. Lenticular sclerosis appears in both eyes at the same time, and while there isn’t a treatment for it, frequent monitoring for the formation of cataracts is recommended.

While there isn’t any evidence that lenticular stenosis causes cataracts, cats who develop cataracts have also had lenticular stenosis. Cataracts that develop in senior cats are formed by degeneration of the lens fibers that causes a whitish, cloudy appearance. Unlike in lenticular stenosis, the lens becomes opaque and prevents light from getting to the retina, resulting in partial to total blindness, which is why it’s important to recognize cataracts early in cats.

Cataracts can appear at any time during a cat’s life, but senile cataracts are most common in middle-aged and older felines. Besides age, cataracts can also be caused by an eye infection, sun exposure, cancer, and metabolic diseases like diabetes. Birman, Himalayan and British shorthair cats are predisposed to the condition.

Signs your fluff ball has cataracts vary widely, but can include walking into objects and not being able to find their food bowl or a toy. Typically, only a veterinarian can detect the difference between lenticular stenosis and cataracts by looking into the cat’s eye with an ophthalmoscope, a special instrument used for this and other interior eye problems. Treatments can include surgery to remove the lens and replace it with an artificial one, and medications, such as anti-inflammatory drops, without which your fur baby may get glaucoma, another serious eye disease.

Glaucoma is a disease that increases the pressure within the eye. Its cause is inadequate drainage of the eye’s fluid (aqueous humor) as the body continually produces it. This condition can cause damage to the retina and optic nerve.

Glaucoma is defined as either primary or secondary. The primary type is caused by an anatomic abnormality that’s rare in cats, although Burmese and Siamese may be predisposed to it. Secondary glaucoma is caused by some other eye disease. In elders, its most common cause is uveitis, an infection in the eye. Other causes may be a tumor, bleeding in the eye, or damage to the lens.

Symptoms of glaucoma include eye rubbing, a partly closed lid and squinting due to pain, watery discharge, swelling and bulging of the eye, redness, cloudy cornea, dilated pupils, and signs of blindness. Treatments include medications such as pain killers and beta-adrenergic blockers, and surgery in severe cases. Frequent veterinarian follow-up visits are necessary to monitor the eye, but the prognosis is generally good. It’s important to remember that acute glaucoma is an emergency.

While uveitis can crop up anytime during a cat’s life, some causes like diabetes and high blood pressure are more frequent in older cats. It can also be caused by viral infections, toxins, trauma or eye tumors.

Uveitis is painful, and signs that pain is present include pawing at the sore eye, totally avoiding touch, squinting or shutting the eye entirely. Felines with uveitis may avoid bright light by hiding under a bed or in a closet. Other frequent symptoms are redness, signs of partial blindness, and mucus or pus exuding from the eye.

Uveitis may be contagious to other cats and people, depending on the initial cause. Diseases such as feline leukemia and toxoplasmosis that are known to be causative factors in uveitis can be caught by Pet Parents or fur buddies. Treatment focuses on controlling the inflammation and easing pain. The prognosis is good if properly treated, generally improving within 24 hours to a few days. Severe, untreated uveitis may result in irreversible blindness.

Conjunctivitis is the most common eye disorder in cats. It can be caused by a variety of common illnesses, including viral feline herpesvirus 1 (FHV-1) or bacterial infections such as feline infectious anemia (FIA). Conjunctivitis may also be caused by trauma, allergies and parasites. In elderly cats, it is most commonly caused by FHV-1 or FIA, but can also result from corneal ulcers, grooming, or from sharing a litter box, bed, food, or water bowls with other felines in the household.

Symptoms include squinting, red eyes, drainage that is clear, green or yellow, and cat flu symptoms  such as a runny nose, lethargy, diarrhea and fever. Once the vet decides on the cause of the eye discharge in your cat, they will prescribe antibiotics or antiviral medication.

Many eye problems in elderly cats are caused by the same group of factors, and it’s up to the veterinarian or ophthalmologist to diagnose, treat, and monitor them whenever symptoms arise. Be sure to check out Wag! for more information on these and other cat health topics!

If your older dog is at risk of developing serious eye problems check out our pet insurance comparison tool. Brought to you by Pet Insurer, Wag! Wellness lets Pet Parents compare insurance plans from leading companies like Pets Best and Embrace.