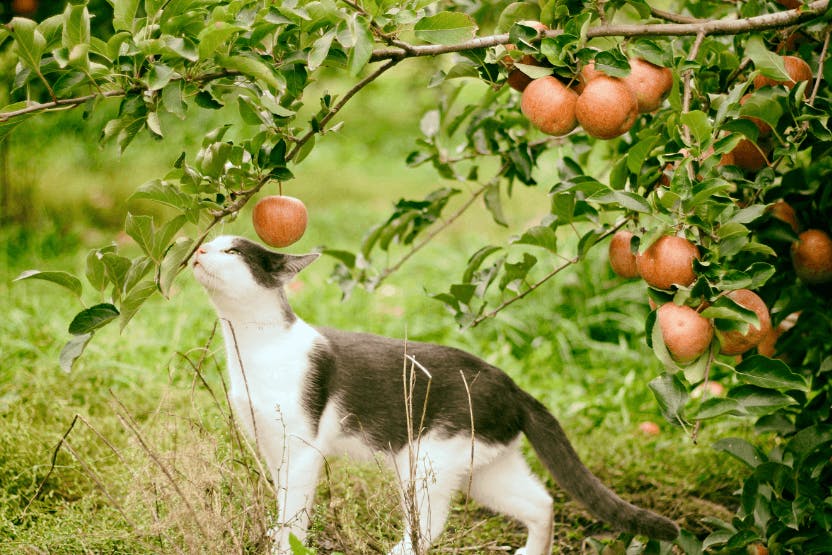 Cats are known to be curious creatures, so they’ll sometimes sample a human’s food. If they don’t like it, no harm done – they’ll likely spit it out and not try it again. This is true of some fruits and vegetables, including apples. Apples are healthy for humans, but do you know whether your fluff baby can and will eat them? Are apples healthy for felines?

Are apples safe for cats to eat? The answer is yes! However, not all parts of the apple okay to eat. While the apple’s flesh and skin are safe, some sensitive felines might have digestive problems from eating them. And the apple’s stem and leaves shouldn't be given to cats, as they may carry dangerous pesticides, while its seeds contain cyanide which can be toxic if the kitty eats enough of them.

Let's see why apples may be a purrific treat for your feline pal!

Some cats seem to enjoy sniffing an apple, suggesting they like its aroma. But whether they’ll actually eat one varies. They might reject an apple because they don’t have sweetness receptors, meaning they can't taste what humans do in the fruit. But they may be attracted by the apple flesh's texture and moisture, and even may enjoy chewing on an apple skin.

Whatever the reason, some purr babies like apples and others don’t. Because cats are obligate carnivores, their dietary needs are fully met by animal and fish proteins alone, so if they turn up their noses at an apple, you can rest assured their bodies won’t miss it.

Health benefits of apples for cats

A cat’s intestines are shorter than a dog’s, which is purrfect for digesting their meat and fish diet. Fruits and veggies need a longer intestine to efficiently handle them. While it’s believed that some cats have adapted genetically to this limitation by being born with longer guts, the majority of cats haven’t made this hereditary leap. The key is giving small portions to help your cat better digest this treat.

Here are a few benefits for apple-munching felines.

Despite the fact that cats may be unable to digest apples completely, they can get some of the same health benefits from apples as humans do, such as an effective immune system, good bone strength, and healthy veins and arteries. Nutrients found in apples include:

Despite the intestinal length issue, the soluble fiber in apples creates a gel when it’s combined with liquid in the GI tract, so it’s a useful ingredient for promoting regularity and stool texture. It bulks up loose stools and aids in both constipation and diarrhea. It’s important to note that too much pectin and the fiber in the apple skin can also cause digestive upset. For that reason, the amount given to a cat needs to be limited.

In the wild, cats get most of their moisture from their food, but many housecats eat a diet of dry cat food. This can result in a cat not getting enough moisture in their diet which can cause some health issues. Apples contain a large amount of moisture – in fact, they’re 86% water! Eating a bit of apple can supplement what’s in the purry pal’s water bowl and help prevent uncomfortable and dangerous dehydration.

A result of a cat’s inquiring mind is a propensity for roaming and playful activity. Cats may also suffer from boredom from eating the same food every day and may tire of their catnip mouse. Two of the ways apples can help is to provide a new taste and texture, as well as something new to play with that smells great! Bored cats can get themselves in trouble by knocking over plants, unrolling bath tissue rolls, and ambushing the human members of their family. Giving your little tiger some apple from time to time may distract them from destructive and aggressive behavior while providing a flavor supplement from kibble, especially if it's paired with a treat toy or puzzle game.

How much apple can I give my cat?

A recommended serving of plain apple that has been peeled, and/or cooked, without any sugar, spices, stems, seeds or core is 1 to 3 teaspoons once or twice a week. If you have concerns about GI side effects but still want to treat your feline with apple, give them 1 teaspoon of mashed fruit and observe their reaction. Store-bought or homemade unsweetened applesauce or tiny cubes of apple flesh are ideal ways to serve apples to adult cats. While apple juice won’t hurt them, giving a small serving of 1 to 2 tablespoons a couple of times a week may affect their blood sugar and weight.

Dried apple is okay if it has been dehydrated without any sulfur dioxide preservative. This chemical inactivates thiamine (Vitamin B1) in a cat's body, which can lead to health issues including lethargy, drooling, vomiting, drooping head, vascular and neurological damage, and seizures. A couple of small, dried apple slices without preservatives can satisfy a cat’s need to play and chew, as well as providing a unique treat.

Apple is safe for kittens, but only if it’s peeled and cooked, then mashed. Even tiny pieces of raw apple may cause choking. It’s recommended that a kitten be given a very small amount of mashed apple or applesauce and be observed for their reaction and any negative effects. Do not give apple to a kitten until they are weaned and eating solid food.

Since a kitten’s nutrition is extremely important, replacing even small amounts of their food with fruit or other human food may not be a good idea. Always consult your veterinarian whenever feeding your kitten new whole foods to be sure they are at the right stage and health status to process them.

Can my cat eat applesauce with cinnamon added?

Cinnamon is a great flavor enhancer for apples prepared in many ways. And while a very small amount of store-bought cinnamon, or cassia cinnamon, fed to your cat once in a while generally won't hurt, it's almost always paired with sugar to cut the bitterness, which shouldn't be given to cats. Also, cinnamon contains coumarin, a blood thinner. Cats don’t have the correct enzymes to break down coumarin in their liver, so the substance remains in the body and continues to accumulate, putting them at risk for toxicity. Side effects could include vomiting and other GI dysfunction, along with major internal bleeding, respiratory problems, and lesions on the skin or in the mouth. Low blood sugar and liver disease may also result.

Allergic reactions can also occur if a cat eats a lot of it at one time, or regularly eats just a little over a long period of time. It's best to go for plain, unsweetened applesauce when feeding it to your feline.

Is it okay to give my cat a little of my apple pie?

Apple pie contains many ingredients that aren’t good for your kitty. First, the crust is flour-y and contains quite a lot of saturated fat, whether the pie is from a traditional home recipe or purchased in a store. Secondly, it contains quite a bit of sugar and cinnamon, both of which are unhealthy, potentially causing diabetes or cinnamon toxicity.

Another common apple pie ingredient is nutmeg, which contains a chemical that can cause hallucinations, disorientation, an increased heart rate, pain, seizures and more. Any food containing nutmeg should be withheld from your precious kitty.

When your cat is pawing at your hand for an apple slice, you can safely give them a bit to explore and taste, just be sure to follow the rules. Always go for unsweetened and unspiced apples, without any stems, seeds or core in moderation, and wait for the purr that is sure to follow.

A high-quality diet is essential for keeping your cat happy and healthy. Digestive problems and food allergies can be expensive to treat. Compare pet health insurance plans to save more than $270 a year on vet care.