How to Protect Dogs from Wolves 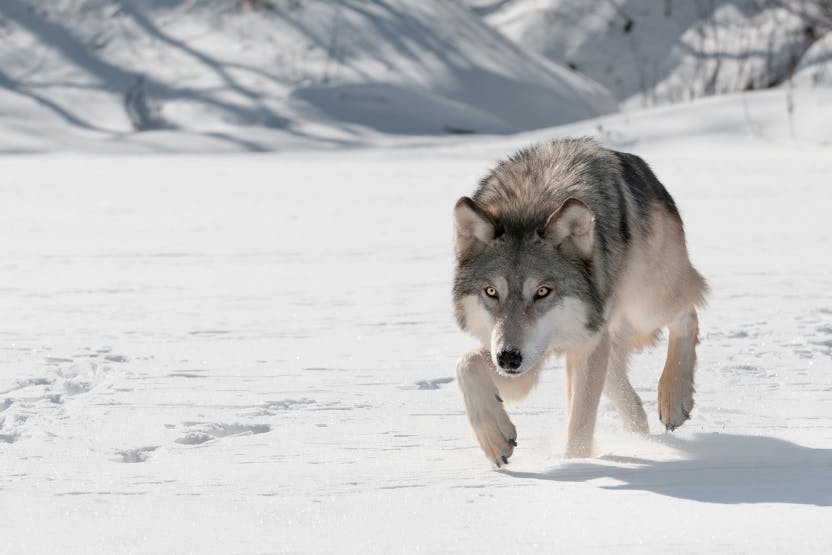 When we think of wolves, we might picture our fur-babies' ancestors trekking across snowy expanses in search of food. These majestic and elusive creatures are rarely seen in the wild, leading many pet parents to think they pose no threat to their pets. But are wolves aggressive to dogs? And what should you do if you encounter a wolf with your dog? Read on to find out.

Where do wolves live in the US?

According to the US Fish and Wildlife Service, there are now as few as 15,000 gray wolves in the US. Of this population, between 7,000 and 11,000 individuals live in Alaska.

It's also possible to encounter gray wolves outside this range. For example, there's an experimental population of gray wolves in Arizona and New Mexico numbering just over 100.

In 2021, a pack of 8 red wolves was released into the North Carolina wilderness in an effort to revive the critically endangered species.

Are wolves aggressive to dogs?

Wolves can be highly aggressive to dogs. While coyotes are a separate subspecies, dogs and wolves belong to the same genus, Canis lupus. Therefore, wolves often view domestic dogs as competition. Wolves can also carry rabies, which increases aggression levels and may cause unprovoked attacks.

Wolves sometimes target livestock as prey. As domestic dogs are used to guard livestock such as sheep and cattle, wolves and dogs sometimes cross paths in confrontational situations, with wolves usually coming out on top.

While there doesn't seem to be any concrete data on the frequency of wolf attacks on dogs, a quick search of news sources turns up several recent examples.

The cost of treating a wolf attack on a dog differs depending on the severity. Sadly, many wolf attacks on dogs result in fatal injuries. Gray wolves are much larger than dogs, and a large male can weigh as much as 145 pounds with a bite force of 400 pounds per square inch.

The least concerning injury a dog will have from a wolf attack is a bite wound. The dog will need an examination, antibiotics, and stitches, setting pet parents back approximately $500 to $1,000. In severe cases with broken bones and deep lacerations, a dog will need surgery, which costs upwards of $2,000 on average.

How to protect your dog from wolves when outdoors

Due to their dwindling populations, the chances of encountering wolves when out walking with your dog are slim. You're much more likely to encounter a coyote pack, a mountain lion, or a bear. That said, it's still worth knowing what to do if you encounter a wolf with your dog, whether you're hiking or camping.

If you come across a wolf while walking your dog, don't turn your back or run. Make yourself as big as possible, and maintain eye contact with the wolf.

If you're in an area where wolves are common, keep your dog by your side. Upon seeing a wolf, stand between the dog and the wolf — this should help defuse the situation.

Bear spray is a non-lethal way of protecting you and your dog from various wild animals, including wolves. Bear spray contains capsaicin and is similar to spraying incredibly concentrated chili peppers at a wolf. If your dog is involved in an altercation with a wolf, the bear spray should quickly break up the fight. Do not try to break up a wolf and dog fight by hand.

Clean up after yourself and your dog.

Like many wild animals, wolves are attracted by the smell of leftover or rotting food. Keep your campsite clean of food waste to avoid unwanted attention. Secure any trash cans left outside.

Look for signs of wolves.

Wolves will leave distinct tracks, droppings known as scat, and possibly old bones behind. Avoid camping or hiking in areas where you find signs of wolf activity.

How to protect your dog from wolves at home

Encountering a wolf at home is more unlikely than in the great outdoors; however, it's not unheard of for wolves to wander into someone's yard. Plus, if you live on a ranch with livestock, you have an increased chance of encountering a wolf on your property.

Wolves can be attracted by female dogs in heat. Male dogs that smell a nearby wolf in heat may wander off to find the female. Dogs and wolves are the same genus and can breed with each other. Wolf-dog hybrids do not make good pets, and interbreeding negatively affects the already shrinking wolf population.

Bring your dog inside at night.

Wolves are nocturnal and hunt at night. Leaving your dog in a doghouse or outside at night increases their risk of encountering a wolf. Bring your dog indoors or put them in a secure enclosure to prevent wolf attacks.

Wolves are attracted by the smell of rotting food and often rifle through trash cans. Keeping your trash cans secured or put away will discourage wolves from visiting your home.

Keep a noisemaker on hand.

Wolves and other wild animals can be scared off by loud noises. Keep an air horn or another noisemaker on hand to scare off nearby wolves. Just be careful not to annoy your neighbors!

Wolves and other animals can climb your average fence, so installing a non-harmful deterrent is wise. Coyote rollers are long aluminum tubes that fit onto the top of fences. They roll when an animal tries to gain traction, preventing them from hopping the fence.

Injuries caused by wolf attacks can be expensive to treat. To avoid high vet care expenses, secure pet health insurance today. The sooner you insure your pet, the more protection you’ll have from unexpected vet costs.