Why Do Pugs Look Unhappy? 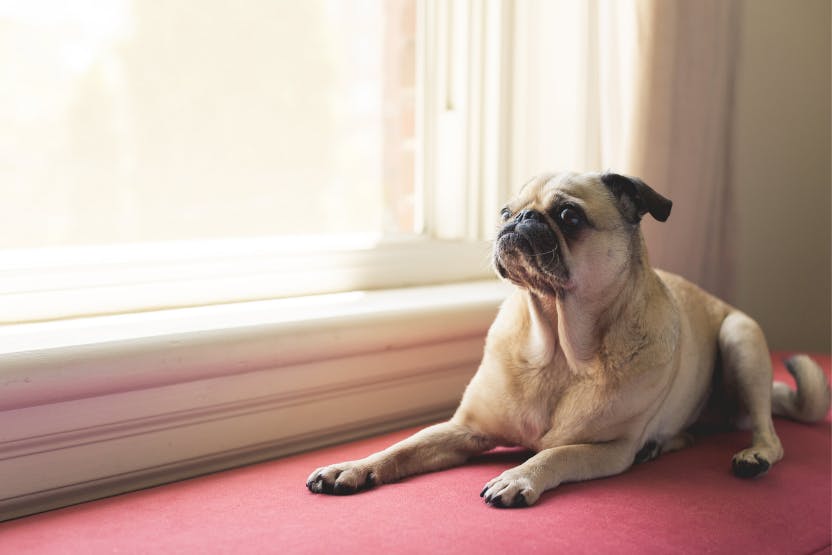 Being one of the most popular breeds, Pugs are easily recognizable by their big round eyes and myriad facial wrinkles. These features give Pugs an expression that many find adorable, helping these small, stocky dogs win the hearts of countless fans worldwide. At the same time, the wrinkled skin around a Pug’s face can give them a sad appearance.

Are these pups unhappy all the time, or do they just look like it? Before we dive into how you can tell if your Pug is sad, let’s first take a look at the science behind their default facial expression that causes such a melancholy appearance.

Why do Pugs look so worried?

Pugs are playful and friendly little dogs, though they may not always seem like it due to their appearance. So why do they look unhappy? The answer is simple: genetics!

It’s no accident that Pugs have so many facial wrinkles. They were created to be lap dogs for Chinese emperors, and breeders actually aimed to produce a pattern on their foreheads that would resemble the Chinese character for “prince.”

Furthermore, a 2017 study revealed that a genetic mutation is linked to flat face shapes in dogs. Using DNA samples and CT scan images of nearly 400 pedigree and mixed-breed dogs, researchers at the University of Edinburgh’s Roslin Institute found that the disruption of the SMOC2 gene affected the length of a dog’s face, accounting for 36% of facial length variation in those tested. In other words, dogs with the mutation had significantly flatter faces, a condition known as canine brachycephaly.

Aside from Pugs, other brachycephalic breeds include Bulldogs, Boxers, Boston Terriers, and Cavalier King Charles Spaniels.

How do I know if my Pug is sad?

Since the skin on their face is so wrinkled, a Pug’s expression can be hard to read. To tell if your Pug is actually unhappy, look for any of the following signs:

The signs of canine depression are often similar to those of other medical conditions, so it’s important to rule out any medical problems as well.

What causes depression in Pugs?

A major change in a Pug’s life or environment can lead to depression. Some common triggers are:

What else could be making my Pug sad?

Due to the shape of their head, it’s common for Pugs to suffer from brachycephalic syndrome. Also called brachycephalic airway syndrome or congenital obstructive upper airway disease, this syndrome refers to a set of upper airway abnormalities that affect flat-faced dogs, which include narrow nostrils, extended turbinates, an elongated soft palate, a smaller trachea, laryngeal collapse, and everted laryngeal saccules.

These abnormalities obstruct airflow, making it difficult for a dog to breathe through their nose. Signs of brachycephalic syndrome include:

Hot or humid weather often aggravates these signs, and affected dogs may develop secondary problems later on, including an increased strain on the heart or inflammation of other structures in the airways. These dogs are also more susceptible to heatstroke.

A Pug’s default facial expression can make them look unhappy even when they aren’t. However, if you suspect that your Pug is suffering from depression, brachycephalic syndrome, or another condition, chat with a vet to learn more about your pup’s health concerns.