“Always happy to see your pup!”

Hello! I'm Chris, a recent Temple graduate and pro dog-walker. My friends and relatives always call on me to sit their furry companions because I'm friendly, reliable and great with their dogs! I know that each dog and their owners have their own specialized needs, and I'm here to be attentive to those needs. In addition, with my degree in psychology, I can help your animal to maintain healthy behaviors to increase their wellness and happiness. Thanks for your patronage!

Hi, I'm Becky! I have lived in Philadelphia for over 15 years. One of my favorite things to do is to explore this awesome city with a dog by my side. I've had dogs and cats my whole life, and don't think I could have it any other way. My current best friend/roommate is George, a 5 year old pit bull/lab mix. I understand that all dogs need discipline and respect, with lots of love and exercise. I'll make sure to always keep all dogs super safe and happy.

I have owned and cared for dogs for the past 22 years. I am a certified vet tech working as an ICU nurse at a large veterinary hospital. I can recognize medical emergencies and administer prescribed medications. I have previous experience boarding dogs of all ages and sizes in my home and look forward to meeting new dogs and their owners as a WAG! dog walker.

Hi, I’m Erin! I’ve been working for Wag since 2017. I’ve walked thousands of dogs, ranging from tiny Yorkies to mighty Great Danes to week old puppies to elderly dogs - I’ve walked them all! I’m a huge animal lover and always treat every dog I walk with respect and endless amount of love. I understand how important dogs are to us, they are more than just a pet, they are family! I’m thrilled to walk your fur baby and give them the attention and exercise they deserve!

Hi I'm Kelsey! I'm a lifelong owner and lover of dogs of all shapes and sizes. I have my Bachelor's degree in Environmental Science, which included an internship at a wildlife refuge. I'm an avid runner and I enjoy spreading my love of health and fitness with people and their four-legged friends. I'm excited to meet your dog and give it the love and attention it deserves.

I have been walking dogs for 3 years and have been a dog lover my entire life. I grew up with a Standard Poodle named Collette. As an adult, I lived in a house with a lovely brown anxious Aussie. I helped to care for the dog- feeding her, walking her, giving medications, and keeping an eye on her to make sure she stayed out of mischief. We also regularly took in foster dogs of all shapes and sizes. I love getting outside and moving around, so I look forward to meeting and caring for your dog!

An avid dog lover who has love pets since his first one at 5. I've owned and cared for several dogs for my friends and family and am very happy to make your pooch happy

“I'm there for your dog as if he/she were my own!”

I've loved dogs my entire life. I strive to be a good dog person, meaning I try to assist friends in training and gladly help out when needed. I have not met a dog I didn't like and vice versa. I have always had dogs of my own and made sure they were trained and socialized.

Hi! My name is Sharon and love dogs. I have had dogs all my life have cared for family and friends dogs when needed. I have been doing it as a business since July 2017

Hi, I’m Sorrel, and I’ve lived around animals my whole life. I love cats and dogs, and cows, too! My most formal experience working with animals was taking blood samples from a cow at UF’s veterinary college. I am confident your dog and I will get along famously on a nice, healthy walk.

Folcroft is a borough in Pennsylvania, about 11 miles from Philadelphia. Originally a farming community, with the coming of the railroad in the late 19th Century, Folcroft became a residential suburb of Philly. It is the beneficiary of many area natural resources for outdoors-loving people and their dogs. Though Folcroft doesn't have a veterinarian of its own, the area hosts more than 6 in Chester, Folsom, Philadelphia and Sharon Hill.

The dog-friendly John Heinz National Wildlife Refuge at Tinicum is America’s first urban refuge, established to preserve and develop the natural area of Tinicum Marsh, as well as provide a refuge for people and their pups in the middle of an urban neighborhood. The 10 miles of trails are open year-round from dawn to dusk, ranging from the parking area on Lindbergh Boulevard, through tidal marsh and along Darby Creek, to another parking area in the Ridley Oak Borough to the southwest. There are 3 observation decks that will enable you to view many species of waterfowl and other birds, as well as fox and deer. If you want to paddle through the marshes and along the Creek for a closer look, canoes and kayaks can be put in at the Lindbergh parking lot area. Fido would love to go along, but don’t forget his life jacket – and yours!

Whatever your plans in the Folcroft area, you’ll find lots to see and do here with your faithful fur-buddy!

This Folcroft neighborhood is home to Leo’s Steak Shop, which was voted The Best of Philly by Philadelphia Magazine and takes credit for putting Folcroft on the map. Their menu is as huge as their 18-inch sub, and they have 8 outdoor tables where you can share with your furry bestie. Arf! Meat is the star of the show here, although you can get a tuna sub if you’re not that into meat. Your whole family, including the fur-pup, can enjoy their fabulous fare! Come on in and have a pawtastic sandwich! Bone Appetit! 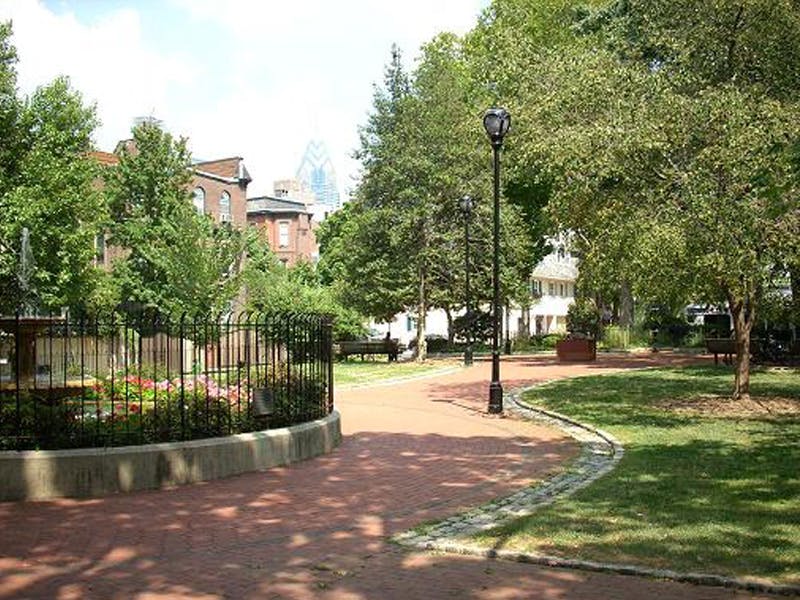 This neighborhood in Philadelphia is where you’ll find the Schuylkill River Dog Run. Located along the Schuylkill River, and inside Schuylkill River Park, the run features separate enclosed areas for large and small dogs behind double safety gates, along with benches and lots of shade trees. The larger park features beautiful views along the river, paved running/walking trails, and lots of places to sit to enjoy the view and the other humans and their pups. The dog run is at the beginning of the larger park, which ends at the steps of the Museum of Modern Art (remember Rocky?), which is a challenging walk or run. Grab Fido, some water and head out to this pawsome park for some exercise.

This Haverford neighborhood is host to the dog-friendly Haverford Reserve Walking Trails. These are primarily meant for walkers and hikers, although you will occasionally be met by a bicyclist or two. Just off the Veterans Memorial Highway, the Haverford Reserve’s trails cover about 4 miles, and there are many of them, some quite short, but almost all intersecting. Coordinating colored signs at trailheads and blazes on trees help you and your pup to stay on your chosen path. As the trails wind through the forest of the Reserve, you’ll notice that some have inclines, some of which can be steep, so try to keep the topography in mind as you plan your hike with your furry friend. It’s wise to take a trail map, as well. Pawrrific!

The Sycamore Mills neighborhood of Upper Providence Township is home to Rose Tree Park, a lovely swath of land with rolling green hills, woodlands and mature trees. With 120 acres, this large park is dog-friendly and attracts many dog walkers, long-distance runners and families looking for a quiet place for a picnic, or just a day frolicking on the grassy knolls. Open year-round, it is well-known for its summer outdoor concerts and winter holiday season extravaganzas, all of which welcome Fido if he is leashed. Cross-country skiing and snowshoeing are popular activities in the winter at this woofderful park!

The Ridley Creek State Park resides in this neighborhood of Newtown Square near Folcroft. This, like other Pennsylvania State Parks, is dog-friendly, but please remember to keep your doggo leashed. With more than 2,600 acres of woodlands and meadows, this park is a walking and hiking pawradise! Ridley Creek flows through the center of the park, and your pup can have a splash on warm days. Open every day year-round from dawn to dusk, the park is an ideal spot for cross-country skiing, too, with Fido by your side! After your walk or ski, head over to one of the several picnic areas for a casual snack or meal. This park features restrooms in 2 of the picnic areas. Pawsome!