The Bluetick Coonhound, named for its color and “tick” markings, is brilliant in both appearance and intellect. On many days, it may be found tracking scents on trails or playfully interacting with families. At home in the wide open country, in spacious fenced-in yards, and among dense forests, the Bluetick Coonhound connects with its history of the nighttime prowl. In fact, Blueticks were bred and prized by early American settlers who longed for hunting companions that could follow week-old spoors and eventually discover the hideouts of wild game. Famous for its inherent, high prey-drive and signature bay, these all-American, energetic hunters are also known for their friendliness, loyalty, and obedience. The Bluetick Coonhound is a sharp problem-solver that seeks to perform and to please and protect its owner. Speedy and determined, this sleek, speckled breed still dazzles us today. Indeed, a creature of such beauty and skill certainly deserves a name that dazzles as well!

For well over half a century, the nation has adored the University of Tennessee Knoxville’s Bluetick Coonhound, “Smokey,” on the sidelines of sports events and at many other UT-sponsored occasions. Whether you cheer for the Vols or not, it’s hard to resist the four-legged, lovable stud. Those beautiful brown eyes possess the power to capture and melt the hearts of both devoted fans and feisty rivals alike.

Making his official debut in the fall of 2013, Smokey X is the current live mascot, and he hails from a distinguished line of hounds that date back to 1953. UT actually recognized the Bluetick Coonhound decades before the American Kennel Club (AKC) finally chose to do so in 2009. Prior to football games, he is the central and most celebrated figure in Neyland Stadium, as he leads the team over the orange and white checkerboard end zone and through the giant T. The Saturday home crowd ― and dog-lovers across the U.S. ― can’t get enough of the stunning, muscled specimen.

Back in 1953, the university’s pep club actually hosted a contest for the Vols’ new live mascot. They wanted a hound but told local newspapers to encourage participants to bring something special: “This can't be an ordinary hound. He must be a ‘Houn’ Dog’ in the best sense of the word.” During halftime at a Mississippi State game, fans cheered as the last dog was introduced. “Blue Smokey” actually threw his head back and howled into the air. The stadium went wild for the very vocal Bluetick, and Rev. Bill Brooks soon found himself with the prize-winning entry. Smokey the First had spoken, and UT had discovered its lucky charm as well as the beginning of a bloodline that would yield Dixieland canine delight in the Tennessee family for years to come.

When Smokey X isn’t the center of UT’s world, he’s the center of the Hudson family’s for sure. He spends his days playing in miles of Tennessee land and snuggling up with his owners, Charles and Cindy Hudson, and their children. After Rev. Brooks passed away in 1986, his wife Mildred continued caretaking duties until 1994 when she handed the reins to her brother, the late Earl Hudson who then passed the responsibility to Charles. Thus, the family tradition and Smokey lineage live on ― Big Orange strong. Reportedly, Smokey X jumps with excitement when he sees Charles packing the suitcase for their football weekend outings. This celebrity Bluetick Coonhound is a bold and fun-loving dog on the go, bearing a name that reminds us of both his whimsical coat and the Great Smoky Mountains of good ol’ Rocky Top.

When choosing a name for your Bluetick Coonhound, consider their history in the United States. These strong nocturnal hunters led their masters to desired meat and skins. They blazed the trails. Their bawls and bays into the night might startle or even annoy some, but for early settlers, the howls signaled moments of joy and celebration: the task was complete, the battle won. Even today, you’ll find that Blueticks are playful yet driven. They are inquisitive and devoted, quick to frolic but also to safeguard their owners.

Further, much inspiration may be found in their striking appearances. The stunning, mottled coat of black, blue, gray, brown, and white affords many color- or pattern-based names. Their childlike energy combined with a somewhat regal air makes them perfect for bearing both humorous and sophisticated titles. On the one hand, you might call him Huck because he boasts a sort of southern charm and dark, mischievous eyes. On the other hand, Etta may fit best because she’s more careful and astute. She’s the head of the household ― at least in her mind. Ultimately, choose a name that suits your Bluetick’s personality and unique physical traits. 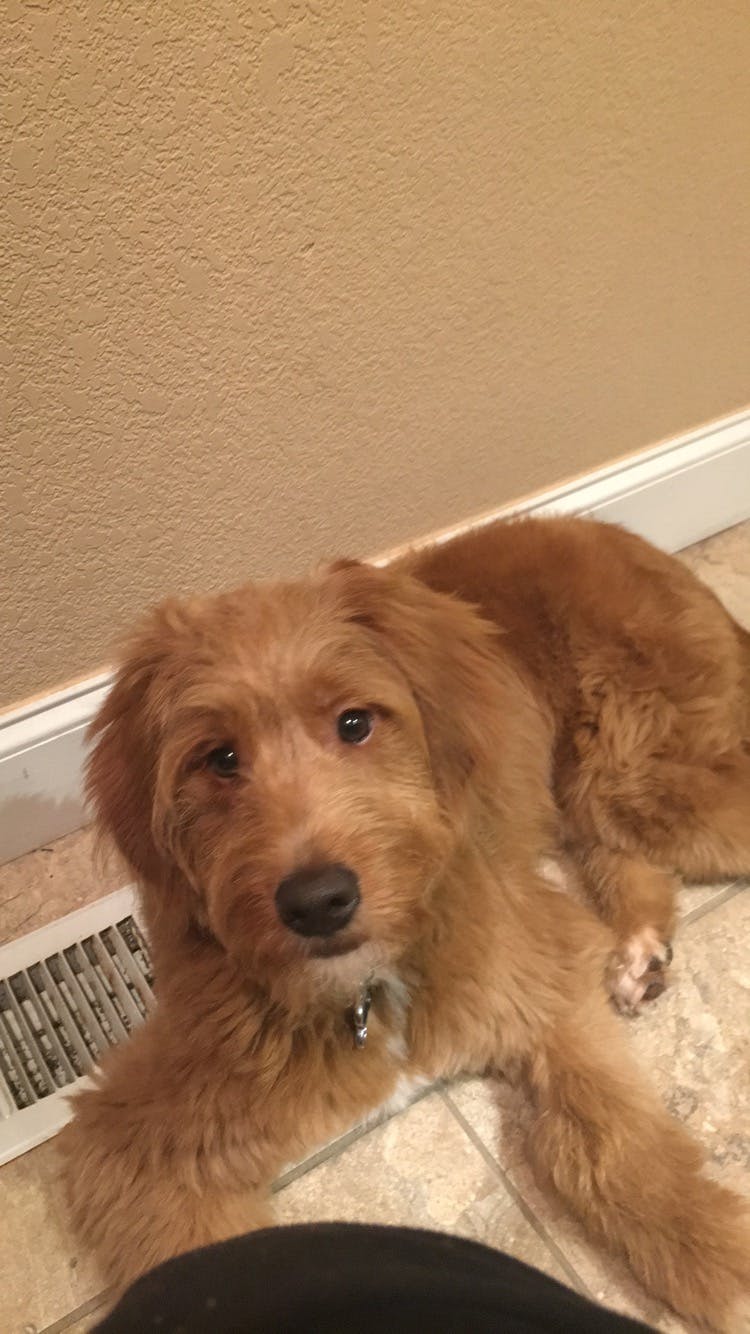 My stepmom works at a hostel so “doc” just came easy 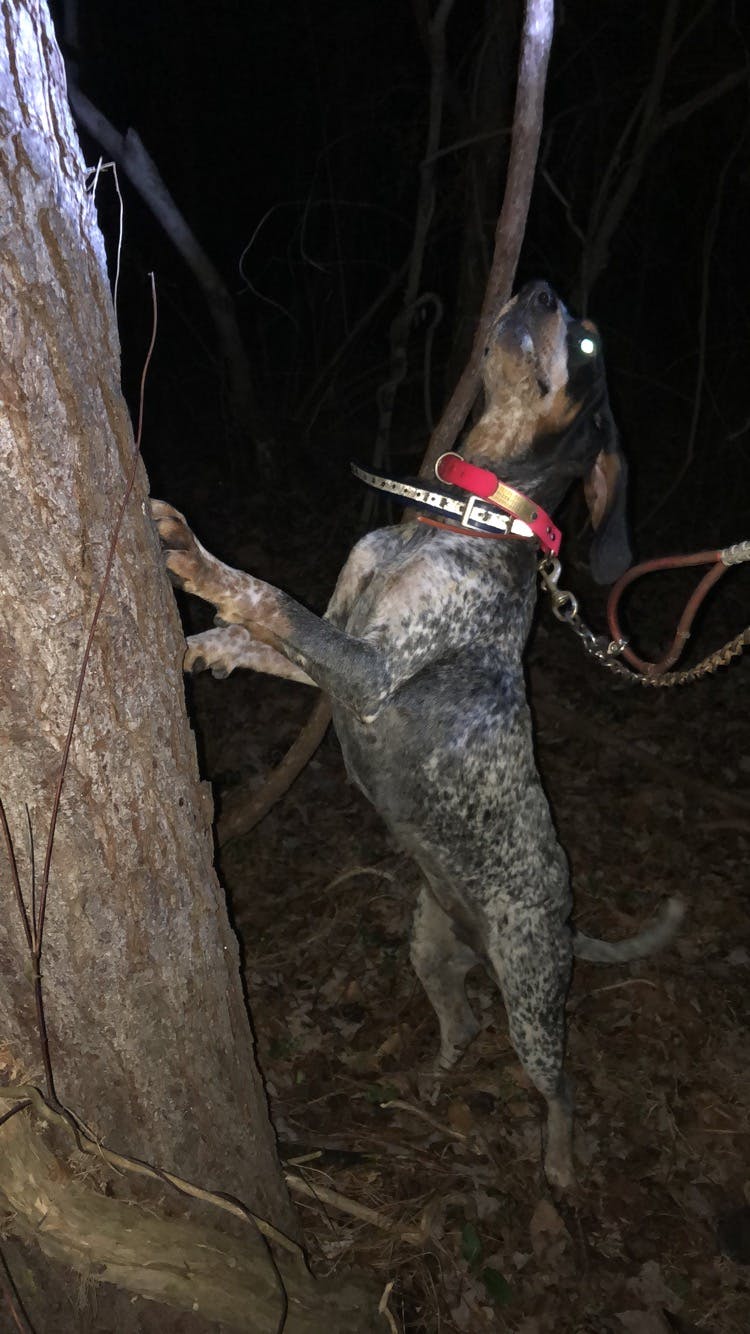 Just saw her spots, and she was white when we got her, so named her bluebelle 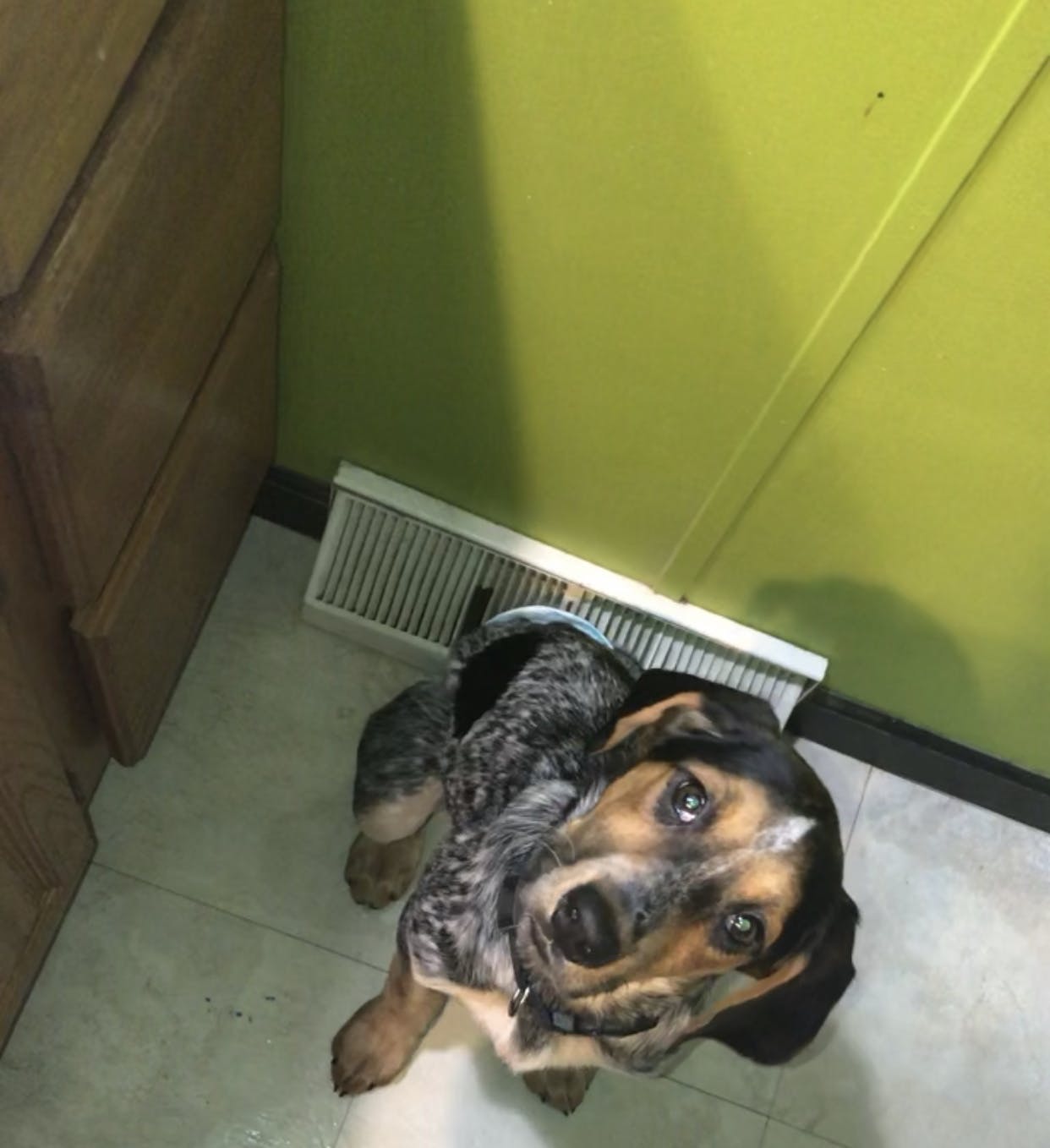 her name at first was stitch, due to my love of the Walt Disney movie Lilo & Stitch, but she just had the personality & looks of a Lelo. She’s a beautiful Bluetick, mixed with some Walker, so she’s got some huge paws & some height!