Have you just brought home your furry best friend and you are seeking the perfect name for your new canine buddy? If you are a fan of the Laura Ingalls Wilder books and television series Little House on the Prairie then you might want to pick a handle for your dog that shows just how much you enjoy the story or show. The large cast of characters and the numerous story plots will give you limitless options when it comes to picking the perfect moniker for your pooch.

Little House on the Prairie Dog Names in Pop Culture

In the books, movies, and made-for-television series one of the main members of the Ingalls family is Laura’s beloved dog, Jack. Jack is a tough mutt who follows along beside the wagon as the Ingalls family travels from state to state looking for a place to permanently establish a farm. Once they settle down he becomes a family and farm dog.

The real Jack who is portrayed in the Little House on the Prairie books is a Bulldog. However, Michael Landon, the actor and creator of the Little House on the Prairie television series, met a scruffy actor dog named Barney and instantly fell in love with him. He knew that Barney would be the perfect dog to play Laura’s beloved Jack on the television show even if he wasn't a Bulldog.

In the series and books, Jack is as much a part of the family and their adventures as his human counterparts. In the very first book and television episode, Jack made his debut right alongside his human family. During a river crossing, he is lost and the Ingalls family fears he might have drowned. However, as the story continues he reemerges to be reunited with Laura and the Ingalls clan.

In another episode, Jack and Laura get attacked by a rabid raccoon. The Ingalls family fears that both the dog and Laura may have contracted the deadly virus. However, they are both spared and never get sick. In another episode, Jack is run over by a wagon and everyone fears he might die but a circus performer gives him special healing powders and the tough dog recovers.

Jack has many comical scenes throughout the many books and episodes such as when Mr. Edwards, a friend of Charles, babysits the kids and lets Jack lick the dinner plates clean instead of washing them. Jack also frequently gets foxtails stuck in his ears and must have them removed. Whenever the family goes into town, Jack always accompanies them. Even when they go to church picnics and other social functions the dog always tags along. When Christmas arrives, even Jack receives a gift from Santa Claus. He is bestowed with a gingerbread cookie.

In the fourth season of the television series, Jack dies. The foxtails that have frequently plagued him penetrate his ears and become infected because Laura doesn’t promptly remove them. Jack becomes sick from the infection and perishes. To relieve Laura’s guilt and grief, Charlies brings home a new dog for her. He is a Border Collie mix named Bandit. However, it takes Laura a long time to bond with Bandit because she misses her beloved Jack so much.

The Little House on the Prairie books were first published from 1932 to 1943. They are written in the third person and centered around Laura as the main character. In total, eight books were created and a ninth was later published posthumously in 1971.

The books have spurred the imaginations of children for decades. They would be recreated for both television and stage. The iconic Little House on the Prairie television series ran from 1974 to 1982. A documentary film, Little House on the Prairie: The Legend of Laura Ingalls Wilder was also created to more accurately depict her real-life story for adults and children.  A musical was also made in 2008. Numerous movies have also released that follow Laura’s life. In 1975, Japan even created an animated series called, The Prairie Girl . There were a total of 26 episodes.

Little House on the Prairie remains a timeless story enjoyed by both children and adults. Although the adventures revolve around humans, there are also many non-human characters such as dogs, horses, and a raccoon that play key roles. You should have no trouble finding the perfect moniker that is truly reminiscent of the books, the series, or any of the numerous other adaptations of the storyline.

Community Dogs With Little House on the Prairie Names 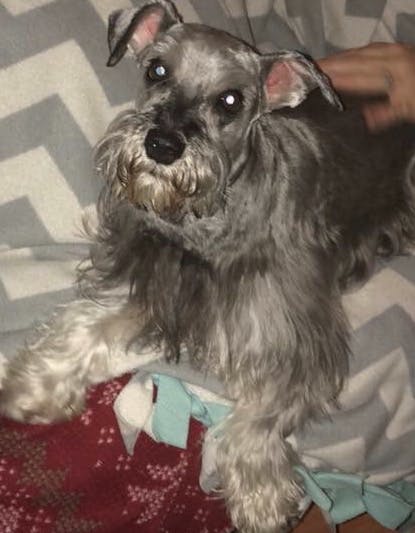 I named my dog Charles since Little House was my favorite show growing up!

Odon, IN
Personality
Spunky and Bossy

Since I already had a Mini Schnauzer named Charles, I knew I wanted to name my Yorkie, Caroline. They are so cute!