How to Protect Your Dog from Owls 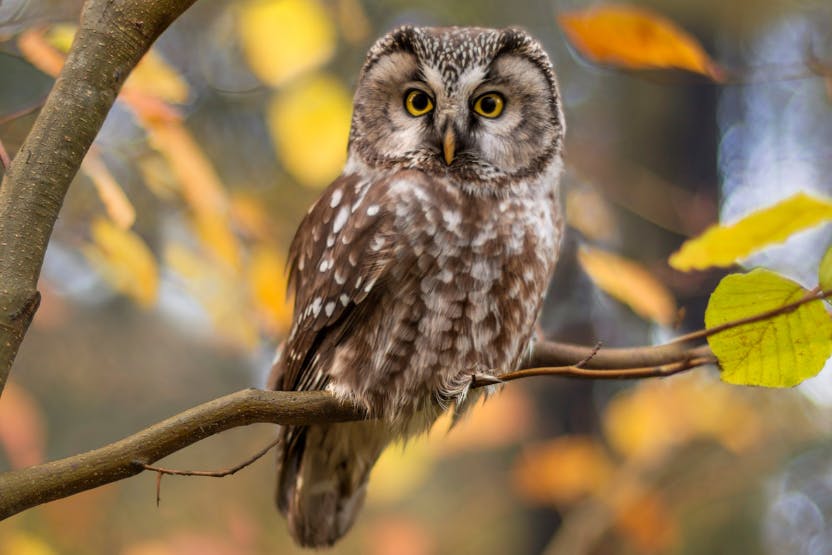 While you may be aware of the threat posed to your pup by predatory birds like eagles and hawks, you might not consider owls to be much of a menace.

People often think of owls as wise, withdrawn, and majestic critters that wouldn't be aggressive to fur-babies. However, owls are apex predators that can easily pick up large prey like rabbits and weasels. But would an owl attack a dog? And how can you protect your dog from owls? Let's take a look.

Yes, owls do attack dogs. That said, owl attacks on dogs are rare. Owls will only target prey they think is small enough to carry away.

Nineteen owl species are native to the US. Only one species is considered a real threat to dogs: the great horned owl.

Due to its size and strength, the great horned owl is the only owl species that would be able to pick up a small dog consistently. Great horned owls can carry as much as 9 pounds, which means they could snatch a Chihuahua or a Yorkshire Terrier.

Where do large predatory owls live?

Snowy owls live on Arctic tundras but spend their winters in southern Canada and the northern US. They're rare, numbering less than 30,000 in North America. Long-eared owls inhabit forests and have a population of around 140,000.

All 3 species are in decline. The long-eared owl population has declined by 91% since 1970. Illegal hunting, deforestation, and climate change are critical factors in declining owl numbers.

Signs of an owl attack

Like many predatory birds, owls can attack in the blink of an eye. Owls are also nocturnal, so the chances are you won't see an owl attack happen.

Signs of an owl attack include:

Diagnosis and treatment of an owl attack

Unless you could identify the bird during the attack, your vet is unlikely to know precisely what attacked your dog, as most bird attacks look similar.

Owl attacks can range in severity. Your dog could suffer superficial puncture wounds, which may only require a few stitches and some antibiotics to prevent infection.

Deeper wounds may result in blood loss. In this case, your dog may require a blood transfusion. If the owl was able to pick up and drop your dog from height, then your dog could have broken bones, internal bleeding, or concussion. X-rays and surgery may be required. In serious cases, owl attacks could end in death.

Vet costs for an owl attack

Owl attacks happen fast and can be difficult to stop. That said, there are plenty of ways to deter owls from visiting your yard.

Keep your dog indoors at night

Most owl species are strictly nocturnal, meaning they hunt at night and are inactive during the day. The easiest way to prevent your dog from being attacked by an owl is to bring them inside at night.

Supervise your dog when outside at night

Even if you keep your dog inside at night, you'll need to let them out every once in a while to go to the bathroom. Make sure you stay with your dog if they're outside at night. An owl is highly unlikely to attack a dog if a person is nearby.

If you want to leave your dog outside for extended periods at night, install a covered patio. With some metal meshing, you can construct a covered area where your dog can spend time outside without worrying about owl, eagle, or hawk attacks.

You'll find several products on the market that will protect your dog from bird and wild animal attacks. The Raptor Shield acts as lightweight body armor for your small dog, protecting your dog's back and neck. It's made out of the same material as bulletproof glass and can withstand a bird's talon and even a coyote bite.

Another popular product is the Coyote Vest. This protective jacket is fitted with spikes and is made from a stab-proof material to protect your dog against a variety of wildlife.

Be aware of nearby nests

Owls nest in various places ranging from trees to human-made platforms to abandoned buildings. If you live in a heavily wooded area or you've heard owls calling at night, consider getting a pair of binoculars to check for nests. If you spot what you suspect to be an owl nest, take extra caution when letting your dog outside.

Owls are predators that often hunt small birds, including sparrows. They've even been known to eat other large birds of prey, like osprey. Leaving bird feeders in your yard will attract small birds, which may attack owls. Remove any bird feeders to reduce the chances of owls visiting your yard.

Bright lights will confuse owls and put them off hunting. If you live in a rural area and your neighbors don't mind, consider installing a motion light to ward off owls and other predatory animals like coyotes. If a motion light is too disruptive, consider investing in an LED collar or attaching a flashing light to your dog's collar to deter predators.

What do you do if an owl attacks your dog?

Owl attacks usually happen in a split second, so stopping an owl attack in progress is difficult. It's also worth noting that owls are protected under the Migratory Bird Treaty Act and that harming or killing an owl could result in a hefty fine and/or a prison sentence.

If you notice an owl circling or attacking your dog, approach your dog while yelling and making loud noises. Take your dog to a vet immediately after an owl attack. Even if the injuries seem superficial, they could become infected or more severe over time.

Are you traveling to an area with a large owl population? Consider getting pet insurance first. Pet insurance can help pet parents pay for unexpected illnesses and injuries (including owl attacks). Our handy pet insurance comparison tool can help you find the "pawfect" plan for your pup.