How to Protect Your Small Dog from Hawks 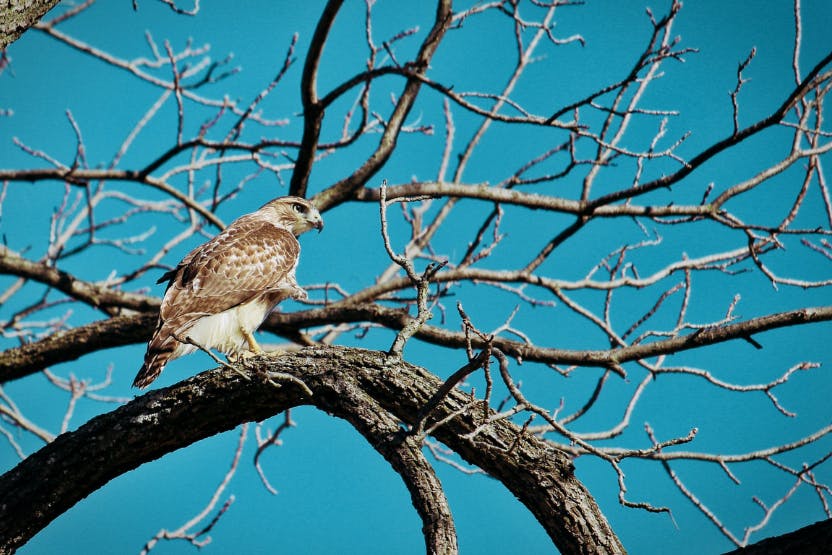 Pet parents that take their pint-sized pups for wilderness walks are probably aware of the threat posed by land mammals like bears and coyotes. But what about attacks from above?

Hawks are one of the top aerial predators in the US, with approximately 25 species across the country. Hawks hunt small animals like rabbits, so do you need to worry about a hawk picking up your small dog? Here's a look at whether hawks attack dogs and how to protect your small dog from hawks.

The answer is yes, hawks do attack dogs, but it's not a common occurrence. Hawks will only attack prey they deem small enough to pick up and carry away. So, large and medium-sized dog breeds, like Labradors or even Springer Spaniels, won't need to worry as much about being attacked by a hawk.

While there aren't many statistics on hawk attacks on small dogs, there are plenty of examples in the media. In 2019, ABC News reported an attack on a 2-pound Yorkie in a Las Vegas backyard. Luckily, their pet parent was able to shoo the bird away with a patio cushion.

In 2018, a hawk swooped in to attack a 7-pound dog in New Jersey. As a result, the local County Animal Clinic of Englishtown put out a warning about hawks attacking dogs that weigh under 12 pounds. The same article also mentions an attack on a Samoyed, a breed weighing as much as 65 pounds.

These attacks aren't isolated incidents. Search the web, and you'll find dozens of stories from across the country of hawks attacking dogs. Other raptors, such as the great horned owl, have also been known to attack dogs. Therefore, it's important to take precautions to prevent hawk attacks on your dog.

Can a hawk pick up a small dog?

You might be thinking that even if a hawk attacked your dog, they wouldn't be strong enough to pick up your pup. In fact, hawks can pick up small dogs and carry them away, just like other prey.

Black-tailed rabbits, which are popular prey of red-tailed hawks, can weigh as much as 6 pounds, more than your average Chihuahua. So, it's totally possible for a hawk to pick up and carry off a small dog.

If a hawk picks up a dog and flies away, it's usually fatal. Often, a hawk will drop a dog mid-flight due to its weight, with the fall either seriously injuring or killing the canine. A hawk can't tell your dog's weight before attacking and may suddenly drop them if they weigh more than expected.

Which species of hawk is most likely to attack dogs?

As mentioned, there are over two dozen hawk species across the US. But does any particular species pose a greater threat to small dogs? In general, red-tailed hawks are considered one of the most dangerous hawk species in the US.

The red-tailed hawk's range and numbers make them one of the most frequently encountered raptors in North America. Weighing around 3 pounds, they're also among the biggest hawk species, meaning they're more likely to see your small dog as potential prey.

Other notable hawk species that may see your pup as prey include red-shouldered hawks, Harris's hawks, and northern goshawks.

How much does it cost to treat a dog with injuries from a hawk attack?

Hawk attacks are usually easy to identify. A hawk will try to pick up your dog by the back or neck using their talons. Therefore, most hawk injuries are puncture wounds that usually require stitches.

Hawks have razor-sharp talons and beaks and cause serious injury to your dog in just a few seconds. If your dog is picked up and dropped by a hawk, they could have head trauma, broken legs, and a variety of other internal injuries.

If a hawk has attacked your dog, take them to the vet immediately. Even if they have no apparent injuries, a fall from height could cause severe bruising and broken bones.

The cost of treating a dog injured by a hawk varies depending on the severity of the attack. If your dog only required stitches, you could pay between $100 and $300. However, if your dog has broken bones or internal injuries, you could have to fork out between $1,500 and $3,000.

Small dogs can be severely injured by hawks.

What do I do if a hawk attacks my dog?

Hawks can swoop in on prey at 120 miles per hour, so chances are you won't be able to stop a hawk attack, even if you spot the hawk early.

It's also important to note that hawks are federally protected under the Migratory Bird Treaty Act of 1918. It's illegal to injure and kill a hawk without a special permit. For example, killing a red-tailed hawk comes with a 6-month prison sentence and/or a $15,000 fine.

Unfortunately, protecting your pet is not a valid reason for injuring or killing a hawk. Fortunately, hawks are generally fearful of people and will keep their distance or fly away if a human approaches.

If you notice a hawk nearby or a hawk attacks your dog, rush towards the hawk, making lots of noise and waving your arms. While many people try to knock the hawk off their pet, we wouldn't recommend it, as you could accidentally maim the bird.

How do I protect my dog from hawk attacks?

While it's tough to know the best course of action during a hawk attack, there are several steps you can take to protect your dog from hawks.

Don't leave your dog outside unsupervised

Avoid leaving your dog outside unsupervised, especially during the day. Hawks rely on sight to hunt and are only active during daylight hours. Hawks are far less likely to attack a small dog if a person is nearby.

If your dog loves to spend most of their time outdoors, build them a covered outdoor enclosure. Sometimes referred to as a "catio", these covered enclosures are usually made from a wire mesh. This way, your dog can still enjoy the sun and the outdoors while being protected from swooping birds.

Get rid of bird feeders

The bird feeders in your yard may attract small birds and mammals, which in turn will attract hunting hawks. If a hawk comes to your yard in pursuit of something smaller but spots your dog, their focus might change. Remove bird feeders from your home to stop hawks from coming around.

Keep your dog on a leash

When you're out on a walk in an area where hawks are common, keep your dog on a leash. This way, your dog won't be able to leave your side, which keeps them safe. A leash also means a hawk won't be able to carry your dog off during an attack.

An obvious way to prevent hawk attacks is to avoid hawks in general. Before setting out on a hike with your hound, check that there are no birdwatching areas nearby where hawks and other raptors are common.

Walk your dog with a dog walking group

Hawks are far less likely to attack small dogs when they're with lots of other people and pups. You can avoid hawk attacks by joining a local dog walking group, ensuring your dog is never alone.

If you're planning a walk in the wilderness, choose the woods or a tree line. Hawk attacks are far less likely in wooded areas where they can't swoop in easily. That said, be sure to watch out for other dangerous woodland critters, like black bears, snakes, and spiders!

What are the best hawk repellent products?

As well as these precautions, there are some products on the market that will scare off hawks and make your dog less susceptible to attacks.

If you're concerned about a hawk attacking your small dog, buy them a hawk-proof vest. These vests usually feature armor and spikes, which will protect your small dog from attacks.

One company called Coyote Vest sells a special Hawkshield made out of a triple laminated Kevlar with attachable spikes to protect your dog from a variety of wild animals.

Most birds of prey don't like competition, so an owl decoy is a popular method of keeping away hawks. Just purchase one of these fake owls and place it atop your roof or somewhere obvious other birds can see it. Owl decoys are an easy and humane way of keeping hawks away from your yard.

A low-cost way to deter hawks is by hanging shiny objects in your yard. Hawks rely on their eyesight for hunting, and a sudden flash of light from a reflective surface will put them off and scare them away. You can buy rolls of shiny tape called scare tape, which you can stick around your yard. Or, for a low-cost method, tie some old CDs to string and hang them from trees.

If you're concerned about a hawk attacking your dog, consider investing in pet insurance. Not sure which plan is right for your pup? Check out our pet insurance comparison tool. Wag! lets pet parents compare insurance plans from leading companies like Figo and Healthy Paws.