I'm Julia, and I love dogs! I'd love to take your pup for a quick walk around the neighborhood to burn off some energy or spend time with them while you're away for a sitting or boarding! I treat every dog as if they were my own, since as a student, I'm not in a place to have my own to care for right now. My customer service background, attention to detail and genuine care for all animals will ensure that you and your pup will have a great experience.

“Love long walks on the beach (do sidewalks count?)”

Hi! My name is Tori. I am a law school student who is currently working from home and would love to have a furry friend to keep me company while also keeping my activity level up! I have grown up with dogs of multiple sizes ranging from a Toy Poodle to a Golden Retriever. I just finished raising a German Shepard puppy (Luke) before he moved to Florida to live with my sister so as you could say, I’m pupper deprived.

“I will love on your furbaby just like I do my own!”

Hi! My name is Tera and I'm a stay at home mother of 2 teenage girls and dog mom of 2! (Chihuahua named Jasmine who is 9 as well as a 1 year old baby pitbull mix named Penelope!) I love walking and/or running the trails in my free time so I figured why not earn a bit of side $ and get to explore new areas as well as play with dogs all day!

Hi, I'm Stephanie! I grew up moving around the states with a Dad in the military. My sidekick Schnauzer named Schnitzel and I were best buds and that is where my love for dogs started. I have experience with puppies and dogs from tiny Chihuahuas to big ole friendly Labradors. I love being outside and watching the pups explore nature. I will treat your furry friend just like they were my own. Let me help you keep your dog happy, healthy, and walked.

My name is George and I've owned dogs for 25 years. I have successfully trained my dogs with the basics but also have taught my pals to play dead, jump through hoops, waving a paw and more. I feel I have a great connection with dogs and they like me. I am a successful businessman and am semi retired and looking for new ways to stay busy and active. I am very responsible and will take great care of your pet. I'm looking forward to meeting and walking with your cherished furry family member.

Hi, I’m Jamie. I am a college student majoring in veterinary technology. I have lots of experience and knowledge on many different breeds and temperaments of dogs. The safety and well-being of your dog is my number 1 priority.

Hi, I was raised on a farm and had a variety of animals growing up which included dogs. I own two Puggles and also own a small dog business called WooferSnacks where I make all natural dog treats. I currently pet sit and board thru Rover and also sit my neighbors pets on a regular basis. I love dogs and look forward to working with yours. Thanks!

Hi, my name is Nik! I'm originally from Corunna Michigan and currently am a Senior marketing major at Michigan State University. I've been the proud owner of several dogs from Shih Tzus to Great Danes and from Labs to Pit Bulls. I currently own a lab mix named Sammi and she is 6 years old. I'm always the first person my friends or family ask to watch their dogs because they know of my passion and great care for dogs. I cant wait to meet your pet and make your Wag! experience a great one!

Hi there. I’m kathryn, I’m a lifelong animal lover and college student. Thank you for trusting me with your dog(s). I do have a dog of my own, he’s four years old. I have always had a dog growing up, so I understand how important it is to make sure I’m doing everything possible to make sure your animal is safe with me. Dogs are family members for life. 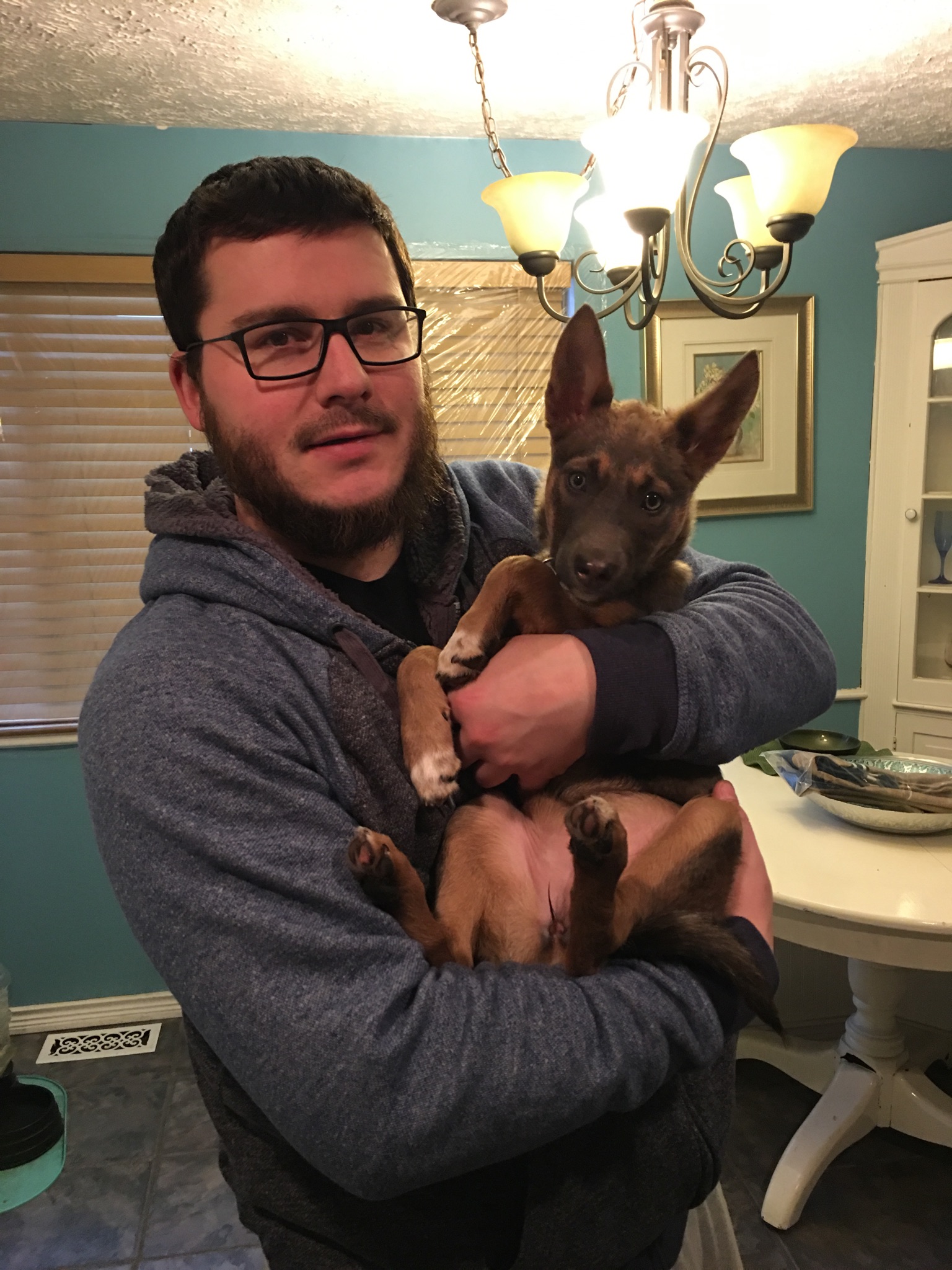 Hello my name is James Akers. I am an experienced pet care provider, with over 8 years of experience. I provide pet boarding, pet sitting, and walking. I make sure that your animal is getting the love and attention that they need while in my care. Please contact me for your next walk or pet sitting needs. The most important detail is always Top Notch Quality care for all your pets! We look forward to providing quality care and always going above and beyond.

Your pup probably doesn't care about any of that, though. (And you probably don't, either!) You'll be far more interested in sniffing out Mason's historic buildings and exploring its scenic downtown area complete with parks and shopping facilities. Need some veterinary help? There are two vet clinics in town to keep Fido happy and healthy.

The city operates 7 public parks, most of which are pet-friendly and open to the public from 8 AM to 10 PM during the months of May through October. Bond Park and Laylin Park are located just a few steps away from Ingham Community Parks Department. Bond Park is a green neighborhood park with two extensive fields and is very popular among skateboarders! Laylin Park is a bit bigger and quieter, with fishing ponds where you can catch and release fish. Both parks have plenty of space to roam, but remember to keep the pooch leashed at all times.

The West Kipp Road neighborhood occupies the southern part of Mason and is bordered by Willow Creek to the west. Kipp Road -- both its eastern and western branches -- is a quiet residential street that features some budget-friendly real estate with large yards. This area is pawfect for pet owners looking to move here! Plus, it's just a few minutes away from Rayner Park. This is a lush green facility centered on a fishing pond. Taking your furry baby with you? Don’t fret. Pooches are allowed to explore and play in the area as long as they are leashed. (It's unclear if pups are allowed in the pond, though.)

Southwest Holt Community is one of the biggest neighborhoods in Holt, MI. Occupying the western part of the town, the district boasts residential areas and entertainment venues along I-96, including shops, cafes, and a golf course. If you wander here with Fido, head straight south to Burchfield Park, a welcoming environment with boating and fishing options. Both local pups and visitors adore exploring the walking trails running up to Deer Run Shelter! Pups can also share a sandwich with you in the picnic areas, or play catch at the ballfield. Dogs must wear a leash no longer than six feet and are prohibited from exploring the beach and pond areas.

Neighbors of Scott Woods is a small and friendly community in Lansing. The residents here are lucky to live right next to the impressive Scott Woods Park. The walking trails here are challenging and well-maintained, welcoming two- and four-legged visitors year-round. Want to let your puppy go wild off-leash? The Howard & Erna Soldan Dog Park is pawfect for you! Local pups love this park, so you and Fido will make fast friends! The entrance has an electronic key system, and you'll need to apply for a permit to obtain access. Don't forget to bring proof of current vaccinations with you.

Haslett is a neighborhood and unincorporated community in Meridian Charter Township, located just 10 miles east of Lansing, Michigan. Centered on Lake Lansing, the area features plenty of outdoor activities and public parks to explore! Get Fido ready for an un-fur-gettable adventure in Lake Lansing Park North, where you can enjoy hiking, camping, and boating on Lake Lansing. This park also features a variety of terrains for Fido to sniff and explore. Leashed dogs are welcome in the picnic areas and shelters as well as the ballfield. Please note that pets are not allowed in Lake Lansing Park South.

Cherry Valle Lane is a small residential community in the western portion of Williamstown, located 20 minutes north of Mason, Michigan. Cherry Valle Lane is significantly remote from the downtown area and offers a variety of terrains and dog-friendly spaces. Joey’s Pet Outfitters Dog Park is a membership-only dog park for residents and travelers who want to let their pooches play off-leash near Lansing. The park is operated by the pet store, which offers all the necessary pet supplies and accessories you'll need. If you want to apply for membership, fill out the application form online and bring proof of current vaccinations with you when visiting for the first time.