Aruba is a picturesque island found off the coast of Venezuela. It is located in the Southern Caribbean and is a destination where the sun shines all year round - literally! The weather is described as perfect every day and despite the small size of the island (it measures 20 miles long and 6 miles wide at its largest point), there is plenty to see and do. We bet once you have visited there, you will return again and again! If you have been to this happy island or hope to go there one day and would like to honor it by giving your new pup a name to celebrate Aruba's beauty, look no further than our list of the top 60 Aruba dog names.

It is nice to see that with the age of the internet, and the fact that the web is expanding the breadth of exposure exponentially, that the plight of the Aruba dog is improving. Rescue networks are popping up in Aruba with reaches all over the world, including the United States, the Netherlands, Canada and Sweden.

The Arubian Cunucu is a canine that typically makes their home on the streets of Aruba. They are thought to have descended from the Portuguese Podengo and perhaps the Iberian Hound. They may have been brought to Aruba by the Portuguese in the 16th century. Over time, they bred with Aruban street dogs and have developed over hundreds of years into the Cunucu, a very loyal, friendly and fun-loving breed of dog. It is unfortunate that many of these dogs are living their days on the streets. However, advances are being made to spay, neuter and adopt out the dogs, often to people who do not live on the island. Diverse in coloring and size, these dogs all have a similar look with beautiful eyes and an adorable face!

One rescue organization is making small changes in a very big way in the life of the Aruba dog, and it all started with a tiny pup native to this beautiful island. Rachel (Miller) Brathen, owner of Sgt. Pepper’s Friends rescue first rescued little Sgt. Pepper from the streets of Aruba when he was only 3 weeks old. He was in bad shape, his little body full of wounds and ticks and his belly swollen from lack of nourishment. Rachel and her partner, Dennis, brought the puppy home to live with them and their canine brood. He quickly became a cherished member of the family, even taking on the role of best man at Rachel and Dennis’ wedding a couple of years later. Sadly, Sgt, Pepper died of a tick-borne disease at the young age of four. His memory lives on though, as Rachel was called upon to honor his memory by forming the Sgt. Pepper’s Friends Foundation.

The Animal Relief Foundation of Aruba is working hard to adopt out dogs like Emmy and Eve who have found homes in Florida and New York. New Life for Paws is another busy and dedicated organization in Aruba, as is the Aruba Animal Shelter Foundation.

Have you recently adopted a pup and are looking for the ideal name? Look no further than your favorite vacation destination! Spending a week or two relaxing and touring is the perfect way to choose a tag for your new pup. If you have no vacation booked, take a virtual tour and stop off at cities or cultural landmarks that catch your eye. Savor by sight the delicious foods of the area or check out a video of a cultural event.

Consider Aruba as an option; with stunning scenery, a bevy of friendly locals on hand, and an abundance of carnivals and festivals to attend, you are sure to find a terrific tag for your new addition. Names like Tumba, for a steel drum-type music heard at carnivals in Aruba or Divi, for pretty Divi Beach, are unique choices for your new number one best friend.

Read up on the Aruban Cunucu dog and their struggle to find a place in the hearts and homes of people world over. Names like Sgt. Pepper, Eve and Emmy will inspire you to give your pup the best home ever - and perhaps to even adopt a second furry buddy! 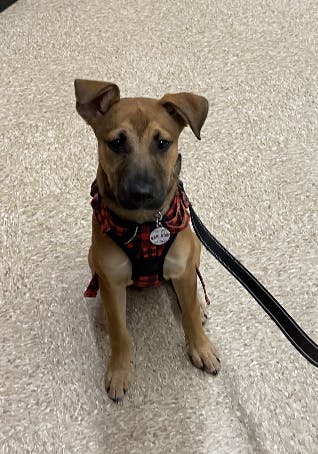 We are from Boston and My kids are big Red Sox baseball fans. The Red Sox play at Fenway Park hence the name Fenway