From the unforgettable classics to the exciting new franchises, board games will always be a party favorite. Friends and family alike are able to make so many fond memories through tense, competitive, and hilarious moments. Many rivalries and times of camaraderie are discovered through playing these clever titles, and you almost always end up finding something new about yourself or the other players!

Are you a tabletop fanatic as well? Bring your board game interests into your life by naming your dog with a moniker inspired by your favorite board game pasttime.

Featured Famous Dog with a Board Game Inspired Name
Checkers
Checkers is the classic board game involving strategy - predicting your opponent's moves and planning out your counter moves. It's simple in its mechanisms but has created decades of mind-bending and competitive fun. The nature of the game is eerily familiar to politics. That's why we aren't surprised that our Featured Famous Dog was the pet of not just any politician, but a president of the United States!

Checkers the Cocker Spaniel belonged to the family of the 37th president of the United States, Richard Nixon. The famous dog's distinct look and style can be found in many pictures of the family, photos detailing their close relationship with the canine.

The reason the unwitting Checkers the dog is cited to be the explanation for Nixon winning the 1968 presidential race is due to a historical event called the "Checkers Speech" or "Fund Speech." In this speech, Nixon defends himself against the allegations that he was using a trust fund meant for the Republican's campaign for his personal extravagant expenditures. Sitting in a middle-class set and detailing all the evidence of his history of spending, he promised he had never inappropriately used supporter's money and other donations during his tenure as a politician. That is, all except for one special dog...

Checkers was actually a gift from a Nixon supporter from Texas. A man named Lou Carrol heard oMrs. Nixon claim their family would love to have a dog over a radio show, and decided to give them a spotted canine. In the speech, it was revealed that it was Nixon's then 6-year-old daughter, Tricia, who bestowed the adorable name to the black and white Cocker Spaniel. The Republican presidential candidate acknowledged that the fact that Checkers was a donation posed a problem, but it was too late - the entire Nixon family fell in love instantly! While he was careful to keep the donation heat off of his career, he couldn't resist the wonderful dog and decided to keep Checkers, no matter what his greatest critics might say. This special devotion made him a country-wide every man, putting on a face that made him relatable to the average American. The innocent and sincere reasoning behind keeping the dog made him a likable person, and nothing like the usual straitlaced politician we are used to seeing in the papers. We can safely say that it worked like a charm!

Due to the result of the Checkers Speech, an overwhelming success that turned the tables, we have no reason to doubt that the Nixon dog was appropriately named.

The most obvious choice may be to name your dog after your favorite board game - full stop! There is a whole library of games out there that you have probably played from the time you were a wee child to the tougher, more exciting franchises you gather your friends for today. Either look back in nostalgia to the titles that made you laugh and cry, or you could browse your current library for the most epic games you have ever played. It's a good thing that the world of board games is boundlessly full of creative themes, stories, art, characters, and more. The industry and community are growing and growing so you will always hear a nice new name you'd love to give your dog.

We advise just picking a title that has given you so many memories - wonderful memories you hope to have with your new pal! Whether it was your crowning moment of awesome, driving the owner of Boardwalk to bankruptcy or your hilarious fail moments when you swiped that Jenga block that caused the entire tower (and your friends) to topple over in laughter, you'll find the one that's stuck to you the most! Giving this super special name to your pet almost guarantees the amount of fun you will gave together! 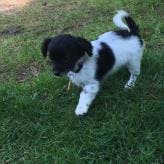