Picking a name for your new canine companion is an important and sometimes entertaining early responsibility of pet ownership. White, when dealing with paint and ink, is the absence of color, but when dealing with light it is the culmination of all colors. While this color is seen as a symbol of purity, elegance, and peace in many Western cultures, it typically represent death and mourning in some Asian countries like China and Korea, and is considered to be a color of bad luck. Names that have white in the meaning, while frequently given to dogs with white coats, also work well for dogs with other varying colors.

Names that mean white are frequently very popular names both for dogs with white coats and for dogs with coats of other colors. Several celebrities have employed names that have white in the meaning. Howard Stern’s much beloved English Bulldog was given the moniker Bianca, a name that he had tattooed on his arm, and Jessica Simpson had a Maltipoo named Daisy, after the classic white flower with a yellow center. Iliza Shlesinger, one of the most popular comediennes today, often features her rescue dog Blanche in her shows and on interviews. Blanche, a tiny mixed breed dog with a fox-like face and long caramel colored fur, goes everywhere with Iliza, and has her own Instagram account, Blanchewaits, with over 22,000 followers.

Pearl, believed to be a mix of Great Dane and Boxer, started out life as an abused animal, raised in a home that was believed to be used as a place to train dogs to fight. She was later adopted by a California woman, Adrian McKee. Pearl has since been trained to help Adrian with a number of health problems, including alerting her to oncoming migraines and detecting when Adrian’s potassium levels are dropping or getting too low. She has been trained to measure the levels of potassium in Adrian’s blood by licking her forehead to taste the sweat. Sometimes, unfortunately, Adrian’s potassium levels drop so quickly that the Pearl is unable to alert her owner before she has lost consciousness.

Fortunately, Pearl knew just what to when that happened to her owner in Big Bear City, CA in 2003. When Pearl was unable to nudge her charge awake with her nose she knocked the phone retriever off of the hook and pressed the large 9-1-1 button that was designed to be pushed with a paw. The police and ambulance workers that arrived at Adrian’s house in response to the silent call were greeted by the door by the seventy-pound dog, who was carrying a bright yellow tennis ball in her mouth to show that she was friendly, as her large size had intimidated paramedics and police in the past. Pearl then unlatched the door and led the rescuers to her unconscious owner and allowing them to take her to Bear Valley Community Hospital to recover. For her heroic act, Pearl was listed as a finalist in the working dog category for the first annual Dogs of Valor awards in 2008.

Choosing a new name for your dog is an entertaining but important responsibility for most pet parents. The name you choose for your pet will be one that you will be saying and hearing many times a day, hopefully for quite some time. Picking one that your dog naturally responds to can help improve your dog’s responsiveness toward training, and names that are difficult for you to pronounce consistently can cause confusion and impair the training and bonding experience.

There are many ways to narrow down a list of names that mean white or are inspired by things that are traditionally white.  You can choose the name based off of the specific canine’s appearance, picking a name like Finnian for a small dog or Matoskah or Satanta for a larger one, or from their personality, giving a dog that spends a lot of time running and bounding a name like Rim, meaning white antelope, where Yonas, meaning dove, may be chosen for a more peaceful and retiring animal. The heritage of the animal can also be taken into consideration, making a moniker of Bái more likely for a Chinese dog like a Pug or a Pekingese, while a more traditionally English dog, like a Bulldog or a Beagle, may be more likely to be dubbed Wynne. 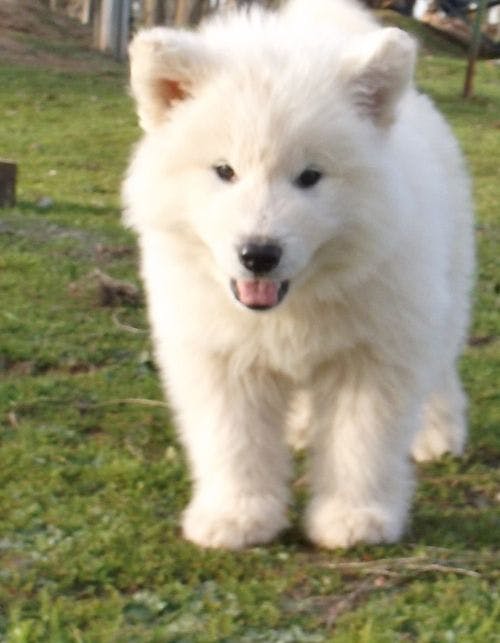 She was snowy white