The Irish Terrier is one of many breeds whose original heritage is lost to time, but they are most widely believed to be a descendant of the Black and Tan Terriers that were common in Great Britain in the 1700s. They were bred as hardworking farm dogs with a high prey drove and as such, they are capable hunters of rats, rabbits, fox, and badger, and tend to have quick minds and a spunky, can-do attitude. Although they can be quite affectionate with their family and love to be the center of attention, they are often reserved with strangers and can become overprotective and blindly aggressive if they feel they are threatened.

Many suitable names for Irish Terriers are quite popular and a few dogs with these names have made the news in recent years.  A blind poodle-mix dog dubbed Fiona was rescued from a trash heap and gained a great deal of attention in 2010, with her rescue being shared on YouTube, along with a request for donations to help restore her sight. Funds from public donations were enough to allow the little dog to receive the surgery and regain partial vision, and she was adopted in 2011. Fiona’s story helped to boost adoption rates for special needs dogs and in 2012 she was honored as the ASPCA’s dog of the year.

A dog by the name of Killian, a strong Irish name meaning battle and strife, saved his young charge from strife when he uncovered the actions of the infant’s abusive babysitter. Killian, a normally friendly and outgoing Labrador Retriever mix, began to growl whenever the babysitter came to their home, frequently placing himself between her and the seven-month-old Finn. Alerted by the canine’s unusual behavior, Finn’s parents hid their iPhone under the cushions of the couch, where it revealed not only yelling and swearing directed at the infant but physical abuse as well. Finn was immediately removed from her care and the babysitter was charged with assault and battery and convicted of 1 to 3 years in prison.

One of the most famous dogs with a name suitable for an Irish Terrier is Higgins, a scruffy mixed-breed shelter dog adopted by Frank Inn. Higgins was a consummate canine actor who first gained the public eye playing the role of “dog” on the long-running television show, Petticoat Junction. He played the part for six of the shows seven seasons, appearing in a total of 149 episodes from 1964 to 1970, during which time he also made a guest appearance on Green Acres with Eva Gabor as well as one on the Beverly Hillbillies. During his career he became well-known for his ability to convey a large range of emotions with his facial expressions and the speed at which he learned new tricks, learning approximately one new trick or routine each week, and in 1967 he was recognized with a Patsy Award and featured on the cover of TV Guide. He retired in 1971 after being featured in the movie Mooch Goes to Hollywood, starring Vincent Price and Zaa Zaa Gabor, but came out of retirement one more time in 1975 to star in the feature film Benji, an enduring classic movie which has spawned eleven additional feature films, a televisions series, and a video game.

Choosing a name for your new pet is an important early step in caring for your new canine companion. The name you pick is one that you will be saying and hearing several times a day, often for many years. In all likelihood, it will be a name that you will be posting on social media, a name you will be writing down at training classes and yearly checkups, and it may even be a name that you shout across a crowded dog park at the top of your lungs, particularly if your Irish Terrier catches sight of a fast-moving critter like a squirrel or a rabbit. There are many names that are particularly well-suited to the Irish Terrier breed, including commonly seen Irish names like Kelly, Patrick, or Maeve, as well as somewhat more creative or exotic names like Zaire, Oona, or Dingle. Traditionally, these canines were used for as both pest control and as guarding animals, making names like Chase, Ferrell, and Eimar extremely appropriate for the breed as well as names that honor their fiery temperaments like Aiden or Eagan. Irish Terriers typically come in varying shades of wheaten and red, so you won’t find names referring to a dark or black coat in this list, but you can look to names like Gilroy, Fiona, and Rowen to describe their color, or Sullivan to describe their eyes. 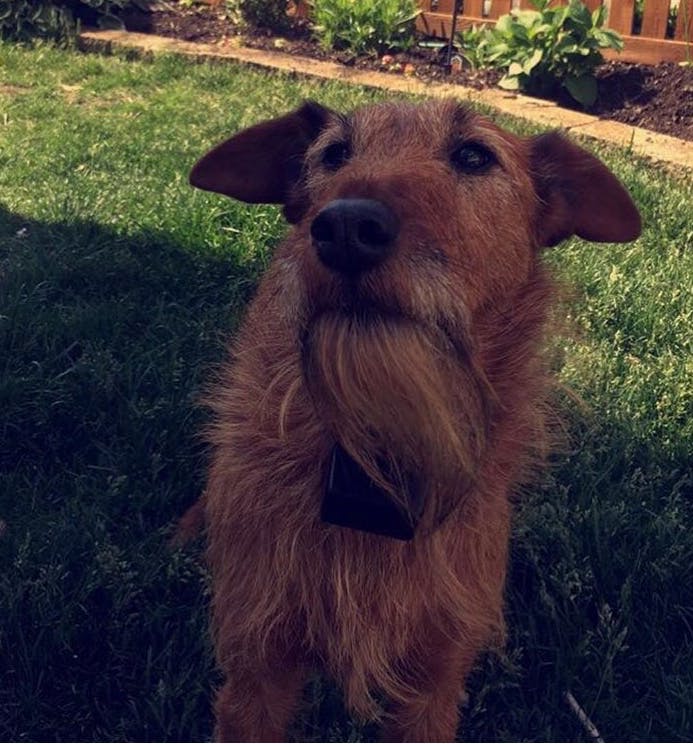 my dog was named after hearing the name of a friends cousin. when we looked up the meaning of “Finley” we decided it was perfect for him