Basenjis are hunting dogs who were said to have originated in the central region of Africa. This African dog is a very unique and strange breed as they are incapable of barking. Outside Africa, this dog breed is typically referred to as “the barkless dog.” Basenjis were originally used to hunt down rats and other small predators that possess a threat to the native Africans’ livestock. Albeit unable to bark, a Basenji is not silent – it can produce various sounds such as growling, whining, yodeling, whimpering, and even screaming. This African dog breed can be stubborn and mischievous, but with adequate training, it can make for the perfect pet and companion.

Basenjis are not the famous type. The African breed rarely gets featured in films or in works of literature. However, in the 1950s, the breed started to gain good publicity after author James H. Street published a novel entitled “Goodbye, My Lady.” The novel features a Basenji dog as one of its major characters. “Goodbye, My Lady” is a story about a young boy’s journey to maturity after he tames and befriends a stray Basenji dog whose name is “Lady.”  This novel is regarded as one of the most touching and tear-jerking coming of age novels in literature.

In a university press, the author shared what ignited and inspired him to write the novel. According to Mr. Street, he was in a bar when his good friend showed him a photo of a young lady with unfamiliar dogs. He wasn’t at all interested in writing a story about it until he learned of the breed. After delving further and learning about Basenjis, he decided to write story entitled “Weep No More, My Lady.” The story got featured in The Saturday Evening Post in the 1940s and received a mixture of reactions, many of which were negative. This caused the author to revise some details and finally publish it under the title “Goodbye, My Lady” in 1954. The book immediately received an overall good response and became a best-selling book in America. Not long after, the novel got turned into a film under the same title.

Originally, James Street himself was supposed to be the film’s principal advisor. Unfortunately, he died of a cardiac arrest before the film production even began. The director, William A. Wellman, then took over the responsibility and proceeded with the creation of the film. In the movie, Lady was played by a Basenji dog registered as “My Lady of the Congo.” The dog actor, who is simply referred to as “My Lady,” is owned by an England-based Basenji breeder named Veronica Tudor-Williams. Interestingly enough, the young lady in the photo that inspired James Street to write the novel is Veronica Tudor-Williams herself. My Lady was then flown to California and the filming commenced.

The film adaptation of “Goodbye, My Lady” featured magnificent, A-list actors and actresses who all have good comments about My Lady. According to one of the actors, My Lady was the “best behaved, most captivating Basenji who ever stole a film scene.” The film became triumphant and received many awards and recognitions throughout the globe. The Daily Telegraph acknowledged the film’s greatness and included it in its list of “Top Ten Best Films” during the year it was released.

Without a doubt, Basenjis are easily one of the most unique and uncommon dog breeds in existence. There is no other breed like the Basenji, which is why it deserves a well-thought-out and extraordinary name. Naming your dog can be challenging. No dog owner wants an ordinary name for their furbaby but at the same time, dog owners can be too indecisive when it comes to choosing from endless options and ideas available online. As always, a name that reflects your dog’s personalities and traits is always ideal.

The traits of a Basenji are both intriguing and distinctive. As previously mentioned, they are not capable of barking. However, they still have the ability to produce various sounds. For this reason, it would make sense to pick a name that embodies the unique trait. Names like Amrah and Monna, which both means “unique,” are good examples.

Basenjis are also independent creatures, history shows that they managed to survive thousands of years solely by themselves and without the guidance of humans. They are highly clever, vigilant, quick-thinking, lively, and always up for adventures. Take all those details into consideration and choose a name that can reflect them. For example, “Akilah” would be great for female Basenjis or “Ayo” for male Basenjis. Since the breed originated in Africa, it can also be a good idea to pick an African name, or a name that can be associated with Africa and its culture. 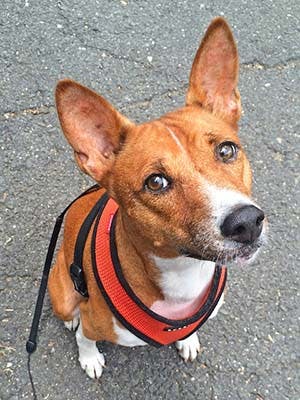