A lot of breeds have made it to the White House as presidential dogs but the Black and Tan Coonhound owns the honor of being the first ever “first dog”. A true American dog, the breed was developed in the southern part of the United States during the 18th century to be used for hunting. A cross between the Virginia Foxhound and Bloodhound, Black and Tan Coonhounds are specifically known for their ability to hunt raccoons and possums, although they are also skilled hunters of big game such as mountain lions, deer and bears. At present, they are rarely used for hunting purposes. Instead, the Black and Tan Coonhound has become a favorite home pet and everyday companion.

Black and Tan Coonhounds are not as popular as other hound-type dogs when it comes to pop culture. However, the breed remains a well-known breed in the United States due to its historical significance. George Washington, the first president of America, played a huge role in the development of Black and Tans and made the breed prominent during his term. Being an avid fan of hunting, Washington has always found it important to have a hunting companion who can track the scent of small, fast animals and at the same time be sturdy and agile enough to take on bigger animals. This is why Washington had his own pack of Black and Tan Coonhounds, named Taster, Tipsy, Tipler and Drunkard, in his Mt. Vernon home.

Another historical figure known for his appreciation for Black and Tan Coonhounds is Thomas Jefferson, the third United States president. A hunting enthusiast as well, Jefferson believed that his Coonhound is one of the best all-around dogs for hunting and companionship. Like Washington, he had his own pack of Black and Tan Coonhounds residing in his home in Monticello along with several other dogs.

Since only a small percentage of the country’s population take up hunting and tracking as a hobby, the Black and Tan Coonhounds are not as visible compared to other dog breeds. However, there are still a number of features involving the breed that are seen in various forms of media. In fact, their long floppy ears, droopy jaws and overall look make for a charming image, one that is often seen in film and commercials. Among the most prominent films to feature a Black and Tan Coonhound in a starring role is the 1999 direct-to-video film entitled The Duke.

The Duke is a British-Canadian film that is centered on a philanthropic duke of Manor and his dog, a Black and Tan Coonhound named Hubert. When the duke dies in the film, he leaves his Scottish country mansion to his dog and his other properties to his American niece, named Charlotte, much to the annoyance of his scheming nephew, Cecil. Believing that his uncle’s money is being wasted on helping the less fortunate, Cecil tries to come up with ways to get the inheritance for himself. Throughout the film, Charlotte starts to fall for a laborer and Cecil puts in effort in trying to give Hubert a bad name so that he can acquire his uncle’s wealth. Although the film was only a minor success, the loyalty and loving nature of Black and Tan Coonhounds were showcased by Hubert throughout the film.

Because of their amiable nature, the breed is also frequently featured in training videos for K-9 units and in drug awareness campaigns for children.

Acquiring a new dog to bring home to your family is always an exciting thing to look forward to. One of the first decisions you have to make after getting a new pup is the name. Remember that the name you choose will be the same one that your pooch will carry forever, so you have to pick wisely.

One way to choose a name is to relate it to your dog’s attributes. For a breed like the Black and Tan Coonhound, the name options are endless. You may go for a name that highlights the breed’s coat color, which is, you guessed it, black and tan. Other than the coat, the breed has several other physical traits that you may use for inspiration, including a medium-sized build, long ears that droop down to the neck and long, muscular legs.

Aside from the physical characteristics, the Black and Tan Coonhound also has behavioral qualities that are worth mentioning. They are calm and reserved, especially around strangers. However, when their hunting instincts kick in, they can be extremely alert and independent.

Another simple consideration for choosing a name for your dog is the origin country. The Black and Tan Coonhound is a full-fledged American dog. Choosing a name that pays homage to the United States and its history and culture would be a great fit for your dog. 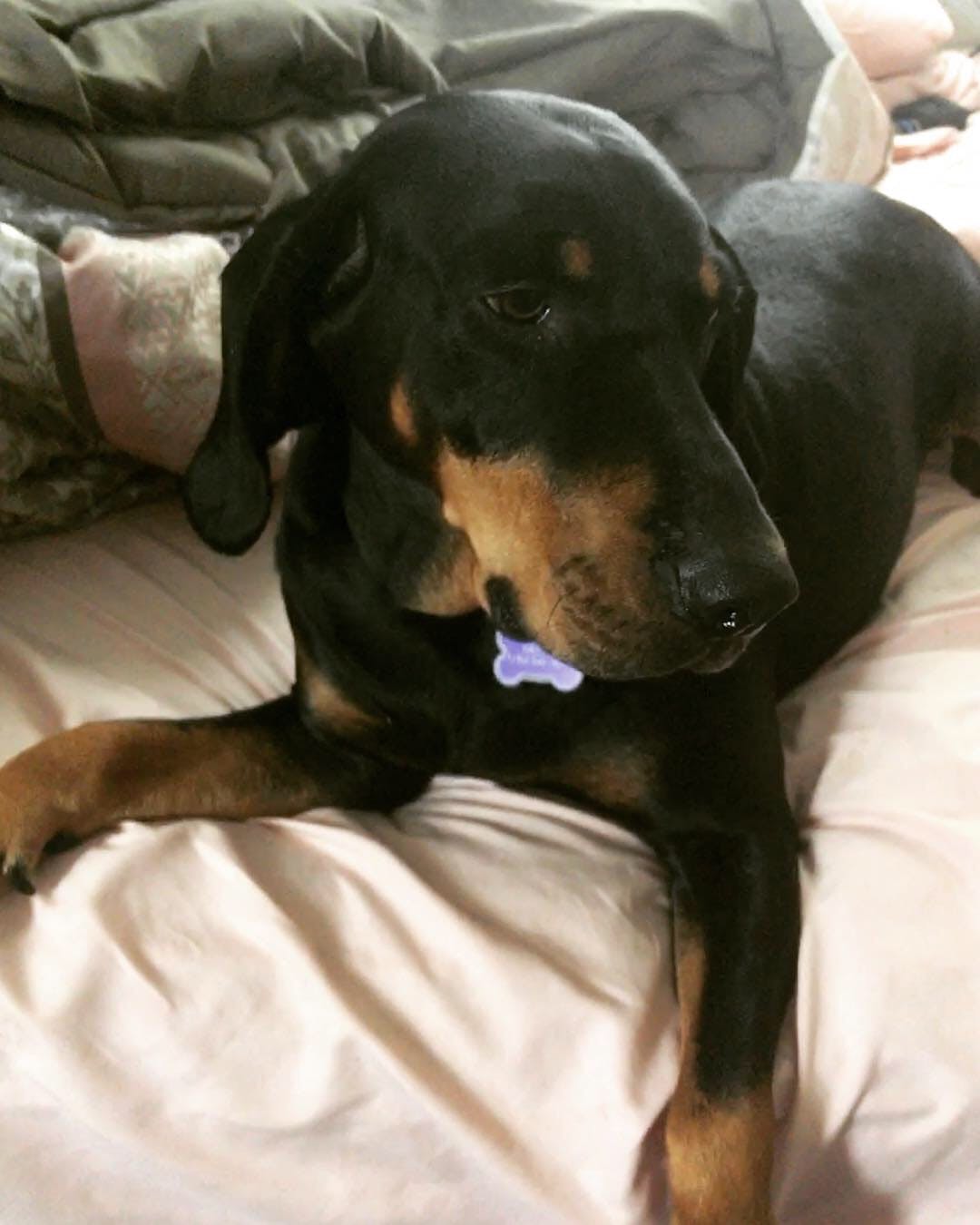 Adobted and peach was giving along with my other dog Bowser 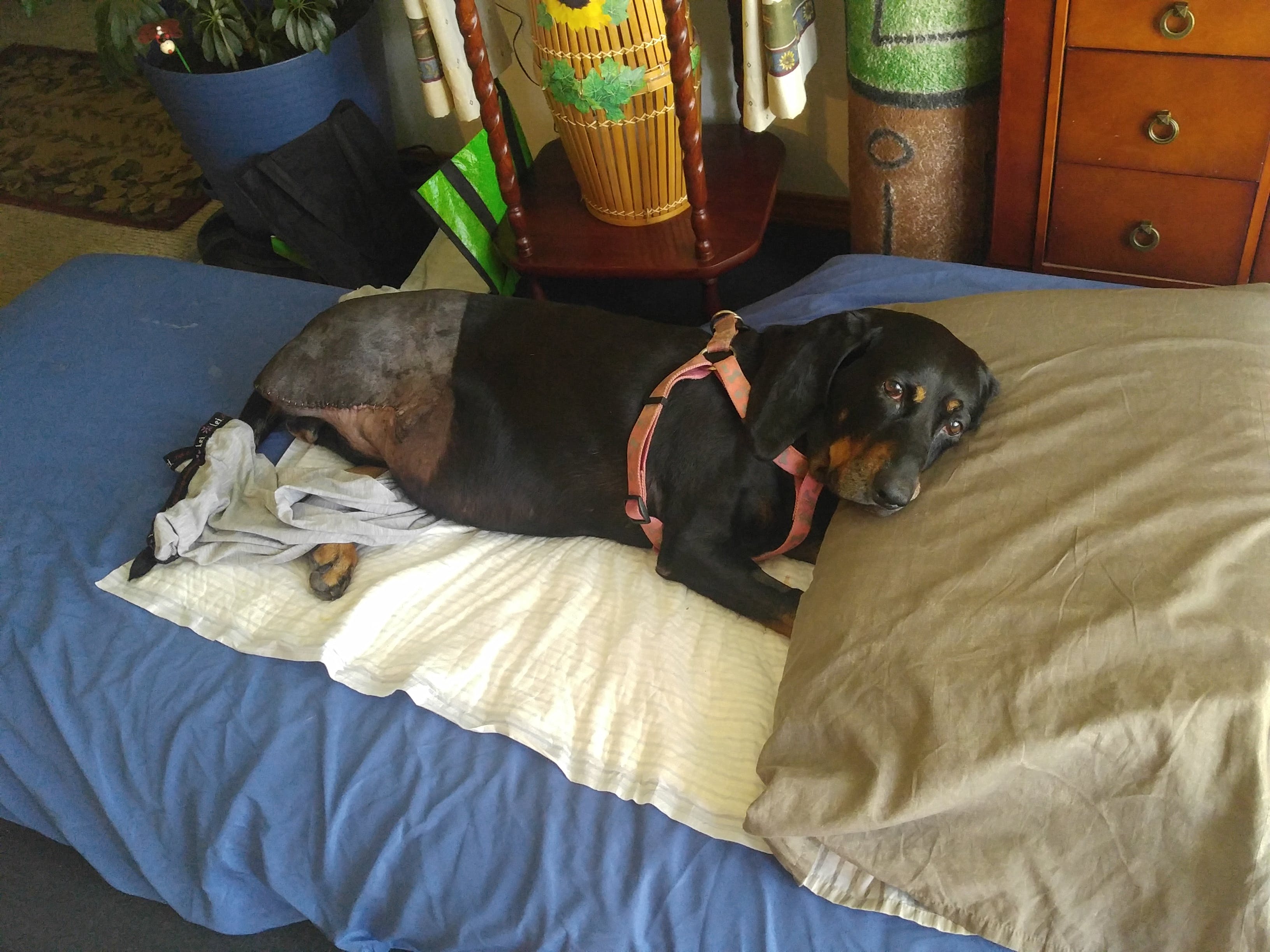