Why be boring when naming your dog? There is no rule that says you have to have a dull, mind numbing name rather than a fun, flirtatious one. The caveat here is that it should be fun, not shocking or repulsive. You can combine names of things to get a new name such as Dogbert which has a new twist. Or maybe you can hint at your dog's fun thing to do, such as Barkin, if he loves to keep barking! You can have a little fun when you are choosing a name. Take the time to nut it out, make a list of possible names and wait a day - you may find the next day the name just sounds wrong. I love Skeeter (short for mosquito) for a dog that is always buzzing about. Or maybe Flea, for a small dog with a big bite, okay, so that is weird, but still retains its coolness.There are so many options when choosing a name, so don't rush it. Get it right and life will be so much easier for you and your dog.

A perfect example of a creative dog name is Horrie the Wog Dog. He was an Egyptian Terrier who was befriended as a puppy by Australian soldier, Private Jim Moody. This was Egypt, 1941 and the dog became the unofficial mascot of Moody's unit, the 2/1st Machine Gun Battalion. Horrie was devoted to his new master and friends, and went  with them as they moved around the Middle East and Greece. The Terrier was very intelligent and easy to train, and he was employed as an air sentry which meant he alerted troops to approaching aircraft. His excellent hearing could pick up the sound of the planes well before the soldiers could, which gave them a distinct advantage to be prepared for the attack. He was promoted to the rank of Corporal and he was there at the evacuation on Greece, and was on-board the troopship Costa Rica when it was sunk. He survived that ordeal but was later wounded by a bomb blast in Crete. When he returned home to Australia, Moody smuggled the dog through the stringent quarantine officials so he could have his furry pal with him. This brave little dog was a hero and a companion to all who met him, giving hope and a moment's respite from the reality of war.

Speaking of heroic dogs with creative names, Strelka and Belka were two Russian dogs that spent a day in space aboard Sputnik 5 on 19th August 1960. Previously a dog named Laika had become the first living creature from earth to travel on Sputnik 2 on November 3rd, 1957. Nicknamed Muttnik (a play on words from Sputnik) she unfortunately died between 5 and 7 hours into the trip. Luckily Strelka and Belka, plus the grey rabbit, 42 mice, two rats, and several other plants and fungi who accompanied them, survived the trip and returned safely  to earth. Strelka went on to have six puppies,  one named Pushinka, who was presented to President John F. Kennedy in 1961. Pushinka  later  had a litter of puppies (nicknamed by the President as Pupniks) and their descendants are still living today. A Russian animated feature film called Belka and Strelka: Star Dogs was released in 2010.

Movie dogs have often been given creative names, such as Barkin, after Charles B. Barkin, a character out of the movie All Dogs Go to Heaven. This title  must be true as dogs have such giving natures, who else but a dog could be guaranteed a place?

There are a lot of things to consider when choosing a name for your dog. What are they? Okay, fair question. First, the name must be easy to say, because if you need two or three goes to get it out, it will be ineffectual. By the time you get the name out, your dog will have lost interest and wandered away. You want something that rolls off your tongue easily, so watch those exciting but hard to understand names. If the pronunciation is difficult, discard the name. It doesn't have to be a short, one syllable name, but you do have to be able to say it clearly and easily. Secondly, it has to make sense in relation to the dog. Poppet for a big, brawny dog just doesn't ring true. Poppet is better suited to a small female dog who is delicate and dainty in proportion. Bruiser sounds more like your serious guard dog, it gives an air of authority, and describes your dog accurately. Select a name that suits the dog, after all you both have to live with it for a long time. And thirdly, respect your new dog and give him or her a name to be proud of. Choose a name that is not a common name for many things so your dog recognises it as its name. They don't speak our language, so make it easy for them. Check out lists like this one to find your own unique name and honor your dog with a name it can be proud of. 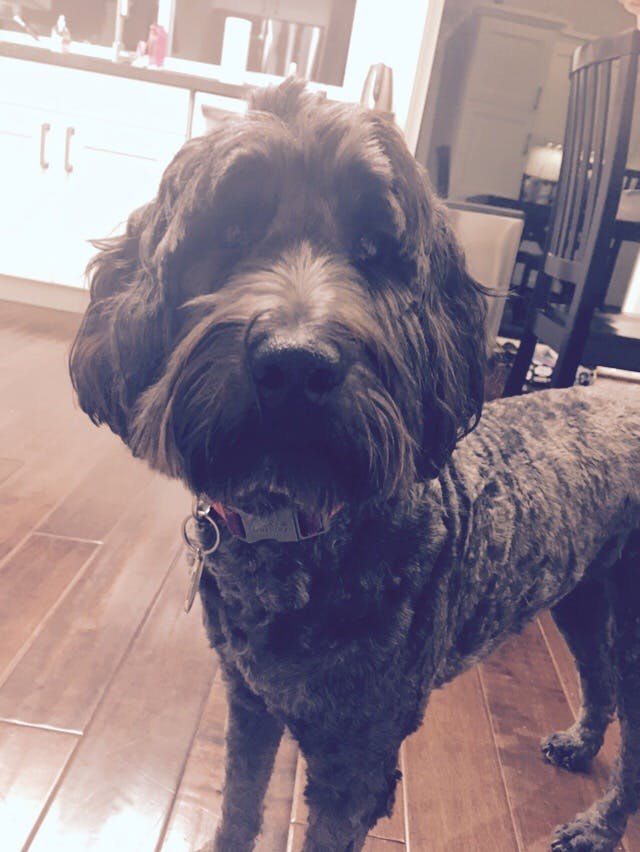