Without a doubt, German Shepherds are considered one of the most recognized dog breeds not just in Germany but also worldwide. In fact, according to the American Kennel Club, it is the second most popular dog breed in the world – and rightfully so. This breed is not only exceptionally loyal to its family, it is also easy to train, attentive and smart. This is also one of the reasons why German Shepherds are used by the military and police forces as their K-9 unit dogs. But, aside from their high level of intelligence, they can also be friendly and sweet to their owners, which makes for the ultimate guard dog and companion. The wonderful dedication to work that this breed has can be an influence when choosing a suitable name for them.

German Shepherds are among the most frequently featured dog breeds in different works. In fact, films starring this particular breed can be traced back to as early the 1920’s. During this time, the most famous German Shepherd was Rin Tin Tin, who was a dog actor and an international sensation. Rinty, as he was nicknamed by soldier Lee Duncan, was rescued at a battlefield during the World War I. Trained by Duncan, he passed an audition for a silent film. With his first film becoming a huge success in the box office, Rin Tin Tin gained worldwide recognition and starred in over 27 films.

Another German Shepherd Hollywood dog actor who was as popular as Rin Tin Tin was Strongheart. He was bred in Germany and first trained as a police dog, serving during the World War I. With his owner unable to support him, Strongheart was sent to a friend in the United States. Discovered by a film director known for training dog actors, Strongheart was bought and groomed for acting. He went on to star in four adventure Hollywood films. He was considered to be the first big dog movie star, just 2 years ahead of the rise of Rin Tin Tin. Throughout their lifespan, Rin Tin Tin and Strongheart were fixtures in the show business industry and even received their own stars at the Hollywood Walk of Fame. Lots of German Shepherd owners have also named their dogs after the two canine stars.

Over the years, German Shepherds continued to make frequent appearances, whether in literature, film or television. A Canadian television series, entitled The Littlest Hobo, aired in 1958. The premise revolves around Hobo, a wandering German Shepherd who goes from town to town in order to help those who are in need. Another familiar German Shepherd is Ace the Bat-Hound from DC Comics. Ace was described as the crime-fighting dog of Batman and Robin and has appeared in several story lines of the comic books.

The German Shepherd breed has also popped up in recent films. In the post-apocalyptic movie I Am Legend, Will Smith’s character, Robert Neville, becomes the last surviving human being in New York after a virus wiped out the entire mankind. His only remaining companion was a German Shepherd named Sam.

The prominence of the breed in the Hollywood scene caused a massive shift in the perception of German Shepherds and helped make them a popular choice for family dogs in the United States.

German Shepherds have been around since 1890 and were originally bred for sheep herding, thus the name. Their unique abilities, along with their devotion to their owners, are unheard of in dogs. These traits further solidify why they are one of the world’s most adored dog breeds. Therefore, this exceptional breed deserves a similarly exceptional name; the usual dog names simply won’t do the trick.

For German Shepherds, whether male or female, a name that exudes strength is appropriate. For the males, names of certain powerful men in history or terms related to power can be chosen. For females, a good name should be one that reflects their femininity while still highlighting their fierce personality. Good examples of such names would be “Thor” for boys or “Xena” for girls.

Aside from the personality, you may also choose a name according to your dog’s physical looks. Lots of pet owners name their dogs based on their coat’s color or some special markings that they may have. Another option to consider is choosing a German name. Since the breed originated from Germany, it would be apt to give them a name or term that is part of the country’s culture.

When it comes to naming your dog, the possibilities are endless. You just have to take some factors into account and eventually, you will find the most suitable name for your new pup. 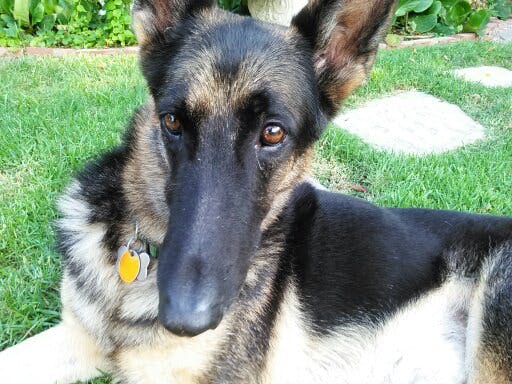 Adopted from German Shepard rescue with the name of Saxon which fits him perfectly.