How lucky to be welcoming a German Spitz into your home. This adorable fur baby will grow into a happy, alert and bubbly dog. They will bask in all the attention you can give them. Now that you have this little pooch, what are you going to call them? Choosing the name can be difficult. You will want it to be special and mean something to your dog. With so many names out there, it can be a daunting challenge. But have no fear, we have compiled a comprehensive list of dog names for the German Spitz. This list will help you to refine your choices before making the major decision. The name you choose must be easy to say. It should roll off your tongue easily because this dog that you have chosen will move quickly; they are active little souls! You need to be able to say their name quickly to stop them in their tracks! Keep this in mind as you browse our list.

Featured Famous German Spitz Dog
Princess
According to witnesses in a Chinese Television show, a beautiful black German Spitz named Princess put eleven spectators to sleep, just by gazing into their eyes. The show was a talent-type of challenge, designed to find unusual entertainment acts performed by ordinary people and in this case, the contestant was the 41-year-old English owner of a jet black German Spitz. Krystyna Lennon, the owner of the dog, sat on the stage with her dog on her lap, and the spectators came up and sat in a circle around them. As the dog gazed into their eyes, they fell asleep one by one, until there were eleven people snoozing on the stage!

That wasn't the end of the story though! In 2015 Simon Cowell - that notorious judge from Britain's Got Talent - fell under the black dog's spell when the duo entered the show. Who would have thought Simon would fall for a hypnodog? He did! His comments afterward said it was like nothing he had experienced before. He said after gazing into the eyes of Princess the dog, he was aware that he was going to sleep but he couldn't do anything to stop it, he just went with the feeling.

Some felt that it might have been the dog's owner who was doing the hypnotizing but there was no proof. To this day, the black German Spitz holds the power over the people! But then, that is nothing new. Ask any dog lover and they will say that they just have to gaze into the beautiful eyes of their dog, and they are under the dog's spell. Dog's rule our hearts in a very subtle, very gentle way.

Popular in Europe, but presently not seen that often in the United States, the German Spitz is indeed a mesmerizing pup! The German Spitz typically weighs between 20 and 30 pounds. This little bundle of fluff named Princess had the power to take over the senses of beings ten times her size!

What do you have to consider when choosing a name for your new dog? First, it must be easy to say, and it must be easy for your dog to learn. Consider a title that does not rhyme with a command; Jay sounds too much like "stay", for example. Simple is best! Secondly, if you do choose a longer name, make sure you like what others may shorten it to. Their shortened version may not appeal to you! Remember you will be asked your dog's name countless times as people stop to admire your pet. So, the name has to be something you are not embarrassed about and it should not be offensive to any party. Apart from that, you can be as creative as you like! For the German Spitz, you could consider a German name such as Fraulein, which means Miss, or Arvin, a tag that means friend to all. Just be sure to check the meaning of whatever you select and make sure you like it. 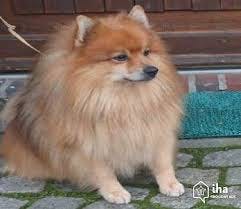