What happens in Vegas stays in Vegas. At least this is the mantra that many adopt after a wild weekend in the city that never sleeps. There are times, however, when memorializing a favorite part of Las Vegas is important. There are many pooches out there with Vegas inspired names that bring a smile to their owners’ faces and fondness to their heart. Naming your new puppy after a favorite performer, casino or even street is a great way to honor your love for Vegas. Dogs of all backgrounds, sizes and colors are sporting names that are inspired by the city that never sleeps.

When thinking of dogs in pop culture, it may be difficult to think of a dog with a Vegas inspired name that has captured our attention. There is one particular star-studded pup that not only has a Vegas inspired name but also has an owner who is very much at home performing in Las Vegas. Britney Spears is a well-known pop icon and a huge dog lover. She can be seen with her precious pooches almost everywhere she goes.

Britney Spears has had five loveable toy dogs that have shared the spotlight with her and shown the world what it truly means to be a pampered pup. One of her little friends is named Lucky and is a tiny Chihuahua. Lucky was a constant companion of Britney’s until her relationship with Kevin Federline heated up and Lucky became a little bit jealous of the time Britney spent with Kevin. Even though there was tension between Lucky and Kevin, Britney doted on the little Chihuahua and made her into a true celebrity. There are many pictures splashed across the internet of Britney cuddling one of her pups close while facing down the paparazzi.

However, eventually Lucky’s jealousy caused her to become overly possessive of her human mom and she was a bit too aggressive towards Kevin. According to several sources, Britney had to find a new home for Lucky when Kevin gave her the ultimatum of him or Lucky. But, Britney still visited Lucky when her schedule permitted.

Other dogs have made a splash within the limelight of Vegas in the Popovich Comedy Pet Theater. This is a family oriented show that features Gregory Popovich along with several of his animal co-stars. While many of the 30 pets featured in the show do not necessarily have Vegas inspired names, the simple fact that they perform in Las Vegas has many people scanning their names for a potential name for their new pet.

While not a dog, Mr. Diamond of the Popovich Comedy Pet Theater has a truly inspired Vegas name and dog owners can take inspiration from this adorable miniature horse. While Diamond is generally a good name for a female dog, by adding Mr. to the front, it becomes a lovable name for any male dog, big or small. Gregory Popovich brings into his show not only laughter, but also sound training advice for the novice dog owner and has even published books sharing his love for training and living with pets including his book “Doggy Gone Good”.

You may decide to name your dog a Vegas inspired name simply because you love the city and have fond memories of being there or you may have a love for gambling. New puppy families like to think of something that really inspires them when they are choosing their puppy’s name and Vegas invokes images of lights, fun and entertainment. Maybe your favorite entertainer has a show in Vegas, such as Wayne Newton or Celine Dion. It could be that your favorite singer has a pooch with a name that grabs your attention, such as Britney Spears’ Chihuahua, Lucky.

Perhaps you are inspired by casino games and find inspiration in your favorite card game or slot machine. Names like Ace and Blackjack come to mind when thinking about puppy names derived from card games. Casinos also can be an inspiration for finding the right name for your newest addition. Names that remind you of a favorite hot spot in Vegas can also be fun, such as Gio for the Bellagio or Wynnie for the Wynn Resort and Casino. For instance, naming a puppy Fremont, after the famous Fremont Street in Las Vegas is a creative way to remember good times had while visiting Vegas. 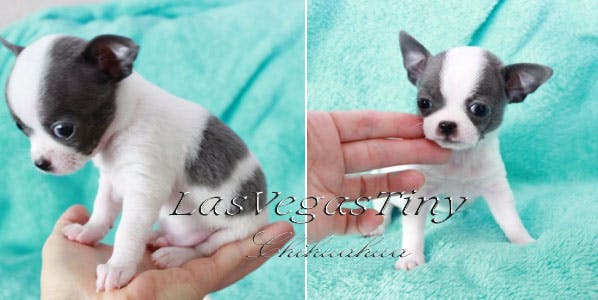 when he was born in "Las Vegas tiny chihuahua" he loves to eat.Breeder call him DYSON(vacuum all in his mouse: milk and food. ,but he moved to New York, we decide to call him more las Vegas Inspired Name))but close to his original name and called him Dice,because he has cute blue spots on his body,as dice . Love him so much.