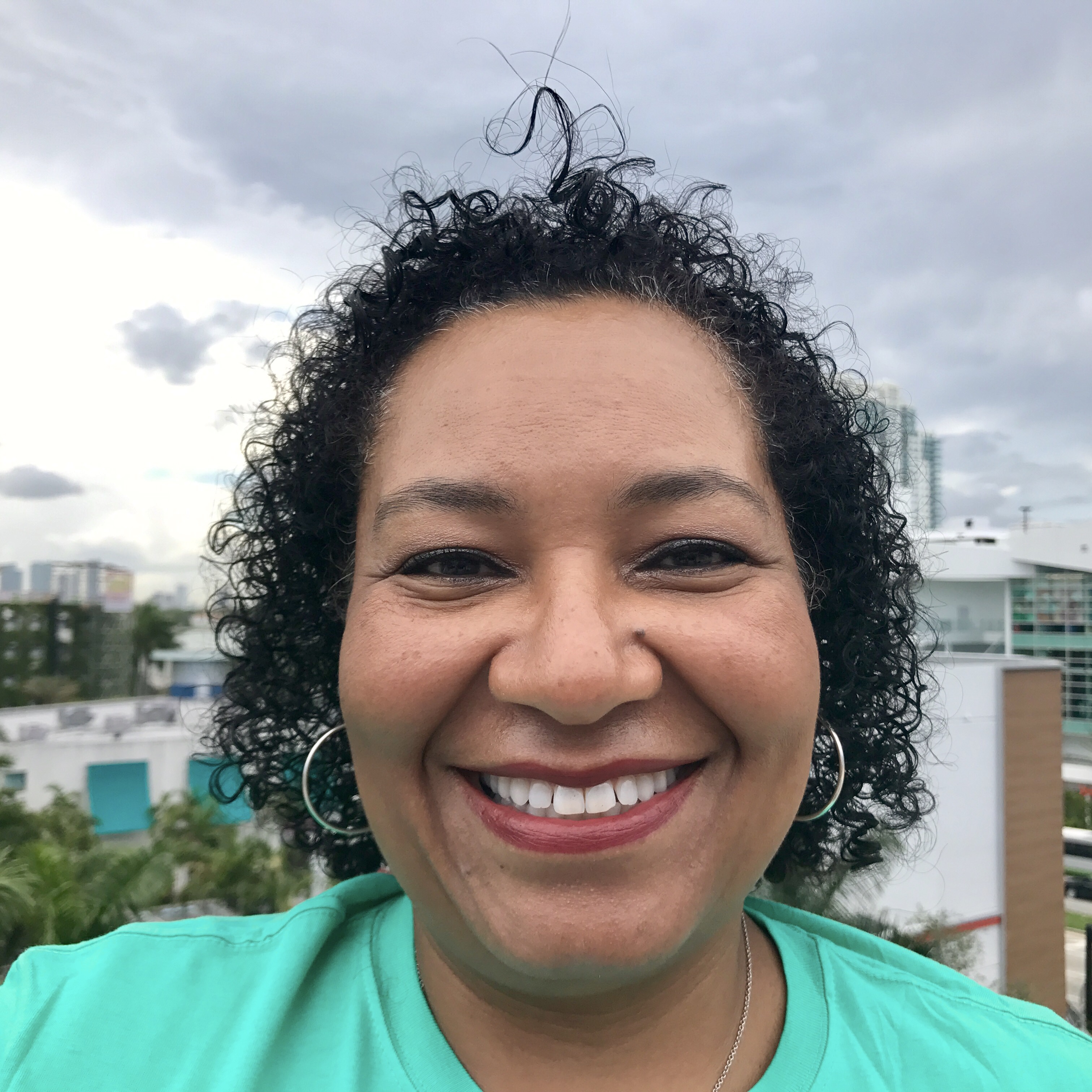 I have been a dog owner and lover my entire life. I have dog sat in the past and am comfortable caring for dogs, including walking, feeding, giving medication, playing, etc. I am looking forward to making lots of new pup friends! 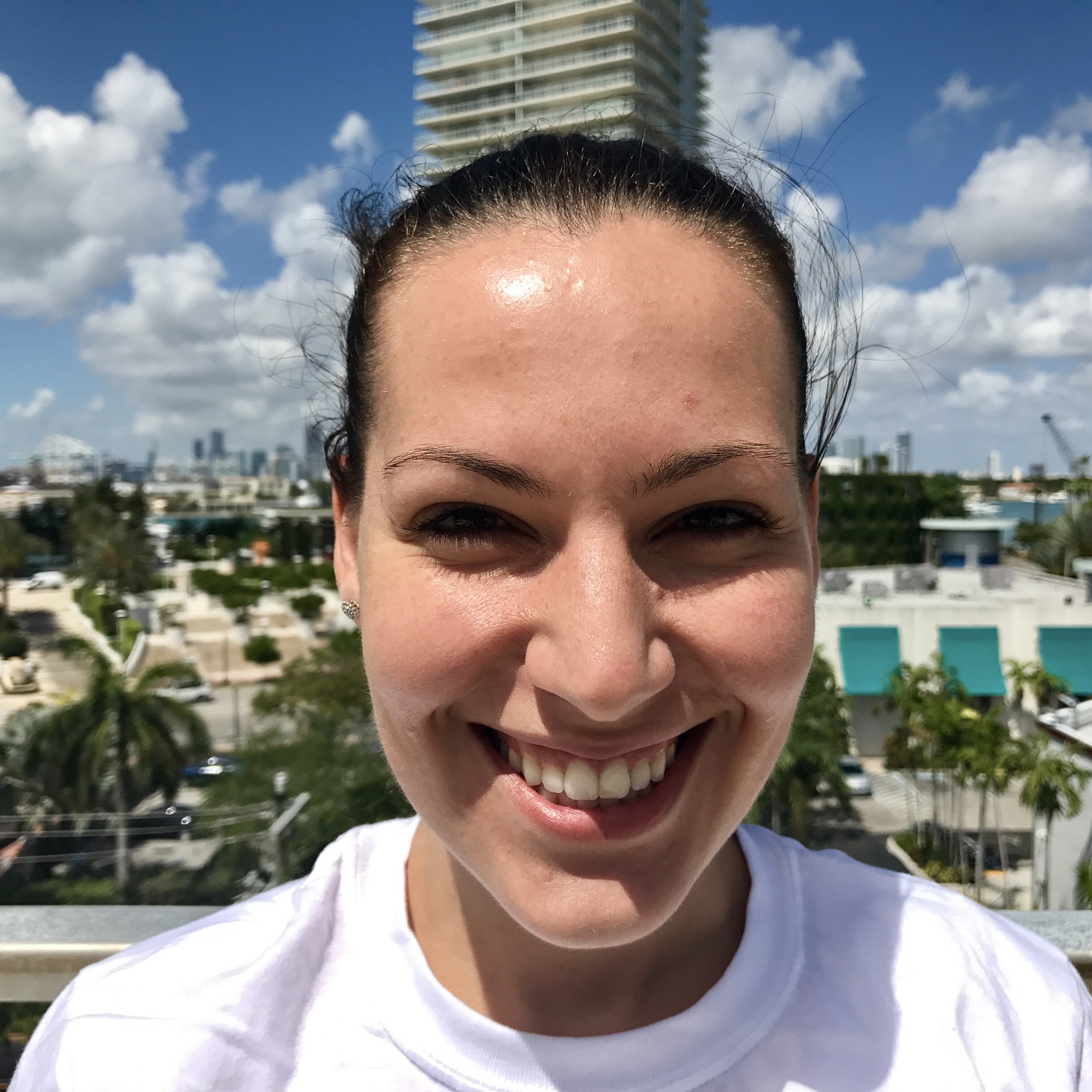 “I’ll treat your pet as if was mine,Love is the key”

Hi! My name is Valentina, I'm Italian and I’ve been living abroad since 2005. Im in Miami Beach since 2011 and I just love pets. I started work as dog sitter and dog walker when I was living in U.K in 2006. I have experience with any size and any dog breed. I'm really looking forward to meet your pet! 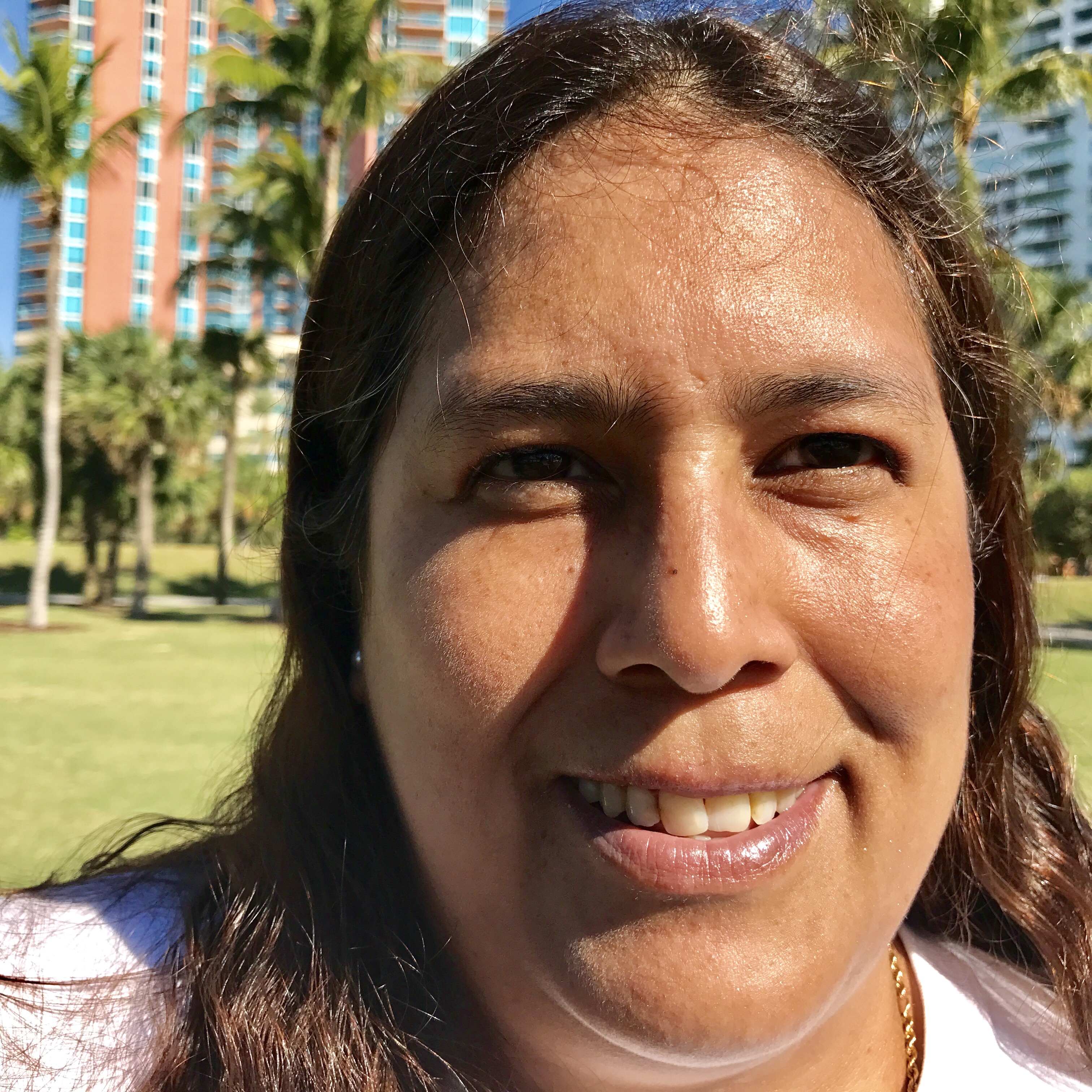 Hi, I'm Maria Crews and I live in Sunny Isles Beach. I love dogs and pets in general, and I have several years of experience with them as a owner and also volunteering at the shelters and in an animal hospital. Right now, I'm the proud, nonna, of Romeo, my daughter's dog and I have two very active ferrets! I hope soon to have the pleasure of meeting you and your fur baby!

Hi, my name is Romana and I grew up in a small village in Czech Republic with two dogs: German Shepard and mixed Russian Sheepdog. As a teenager I developed a passion for training dogs, so I learned basic obedience techniques and helped many families with their pups.Later I became a proud owner of Cocker Spaniel girl and she was my only baby. We lived in an apartment at the time, so I know all about the scheduled walks.No dog breed is too small or too large for me! I am great with puppies and enjoy training them as soon as possible. I am also able to take care of older dogs who require a special medical attention or are taking medications. I understand how important your pooch is to you and he/she will be in great hands with me. I am responsible, nurturing, loving, and extremely attentive. Also, I work from home so I can easily devote my time to your pet anytime during the day. I am looking forward to meeting your dog!

I have an eleven year old dog named Mocha. She has been with me for about half of my life now. She is actually the reason why I took this job. Mocha is prone to urinary tract infections and I was having to pay for constant treatments as well as prescription dog food. There isn’t anything I wouldn’t do for my baby and that is what makes me good at my job. I make sure that I take care of everyone’s dog the way I would want my dog to be treated.

I like to think that I come from more than just one lifetime of experience with animals. I have been running my own dog-boarding business since 2012, and I am excited to expand into the world of Wag! I am physically fit and have experience walking dogs of all sizes. If there's one thing that you get when booking with me, it's reliability. If I commit to serving your dog, you can count on me to see it through! 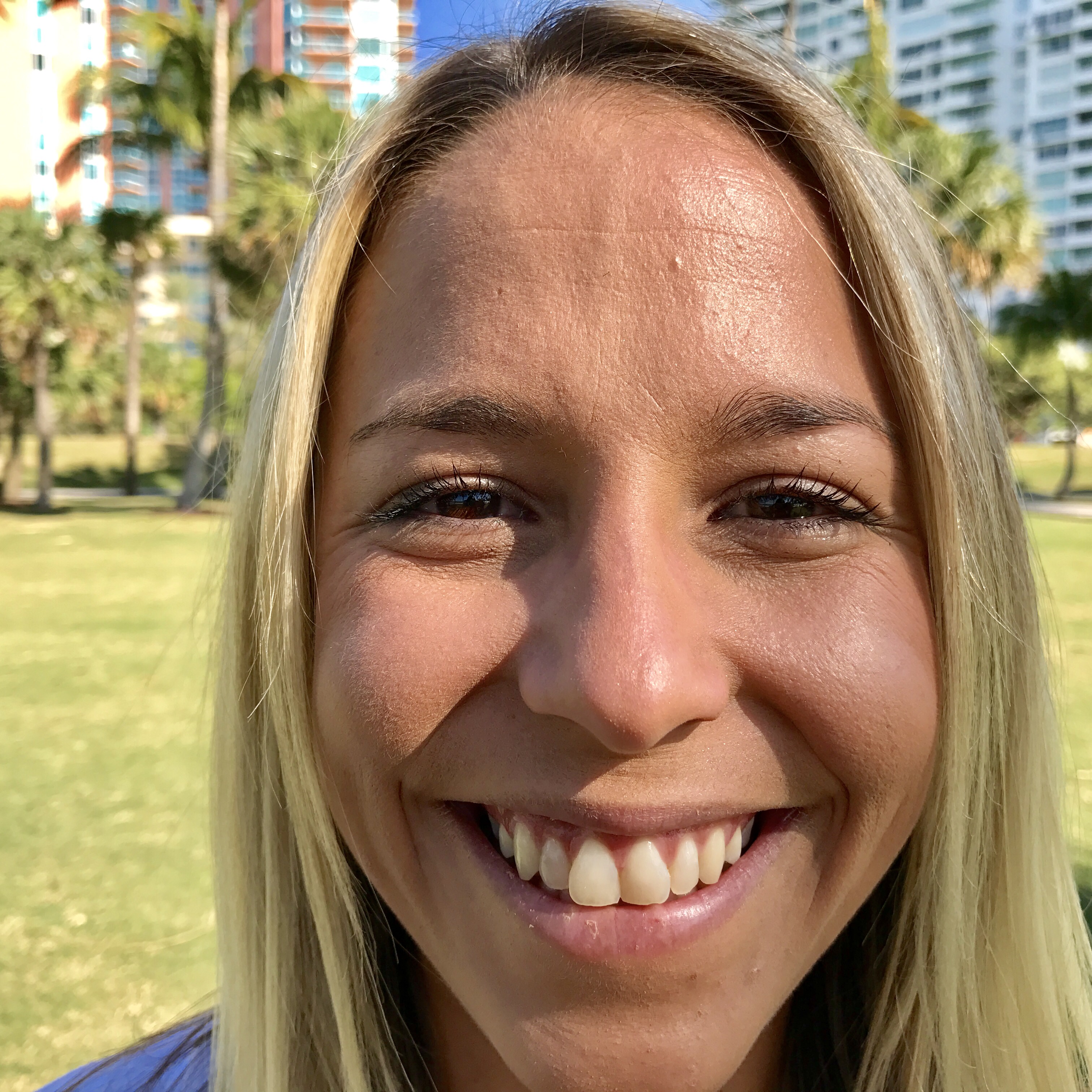 ​Hi, my name is Alicia. Im from Cutler Bay, Fl and I've lived here my whole life. I have two dobermans, Sasha and duke. They are brother and sister and will be 2 in May. They are both very high energy dogs so if you have one I know exactly how to take care of them. I've been pet sitting for 10 years for friends and family and dog walking for about 3 years for WAG. So when your busy I’m here to help. I can’t wait to meet your pooches and have a wagtastic day.

“A walked dog is a happy dog!”

Hi there, I’m Megan and I am a full time professional dog walker. Your pets health, safety, and happiness are my top priorities. I adore my own pets and consider them to be a part of my family. I promise to care for your fur babies with the love and respect they all deserve!

“The Pawfect Walker With Every Step”

Hello, my name is Ashaunte Stroman all beings are love. Especially dogs, Foxy was my first pet and best friend for the first 13 years of my life. We did everything together until my fiery Pomeranian blessed dog heaven. Growing into my love for pets I have participated in clinics, marathons, and animals shelters giving helping hands of every sort. Dogs are the best companions one can ever experience in a lifetime. Looking forward to meeting you and your fanimals. Take care and be blessed.

Hello my name is Manny, raised in Miami, FL since age four and lived here all my life. I have experience with large dogs. Owned a Pit Bull for 15 years from just four weeks old. I have rescued four Rottweilers to this date, currently owning two. I have a big heart for animals and seeking to make a difference advocating adoption of rescue animals.

The city of Miami Beach, Florida was founded in 1915 and is made up of a group of islands between the Atlantic Ocean and Biscayne Bay. The town has the largest Art Deco District in the world, which is on the National Register of Historic Places. It is a group of hundreds of apartments, hotels, businesses, and homes built between 1923 and 1943. The city is home to almost 90,000 people and close to 20,000 dogs, so you know there are some great places to take Fido when you visit. In fact, there are six dog parks run by the city of Miami Beach just for your furbaby.

Flamingo Park on 13th Street has two areas for large and small pooches, double gates for security, drinking fountains, pet waste bags, benches, and some play equipment. Pinetree Park on Pinetree Drive along Indian Creek has two double-gated dog runs, benches, water fountains, and waste bags. Washington Park on 2nd Street has two-gated dog runs, water fountains, and waste bags. South Pointe Park on Washington only allows dogs off-leash between six and nine in the evening, but they have a pretty nice open area for your furbaby. Belle Isle Park on Island Avenue is smaller than the others but has the same features. North Shore Open Space Park on Collins Avenue has all of the above as well as restrooms, BBQ pits, picnic tables, playgrounds, trails, and access to the beach area. 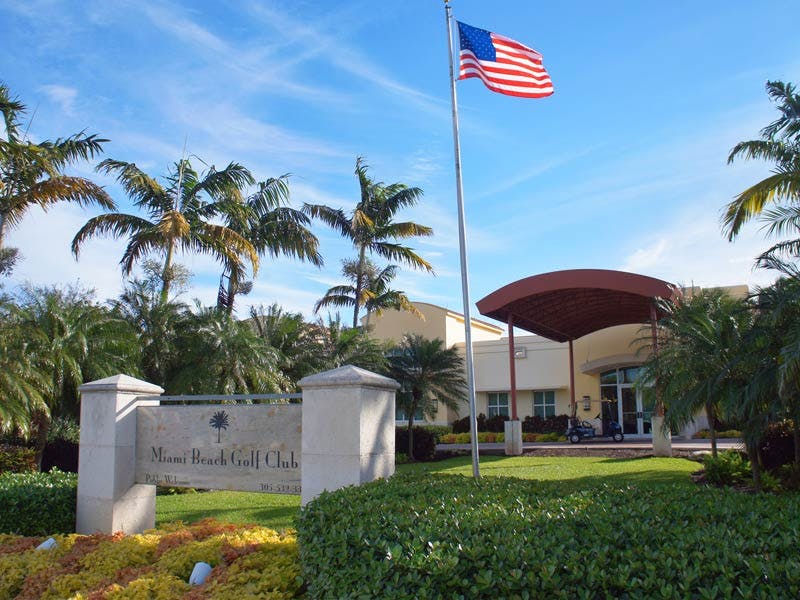 Just outside of downtown Lutz is the Carolyn Meeker Dog Park and Nature Trail, otherwise known as Lutz Dog Park. The park is separated into two areas, separated by a small pond: one for big dogs and one for small dogs. Along with having plenty of benches for pet owners to relax on, the park also features water fountains so that both you and your dog can rehydrate after having fun under the sun! Bathrooms are also available. Whether your dog is big or small, he’s sure to have a ball exploring and making new fur-riends. This is an off-leash park. 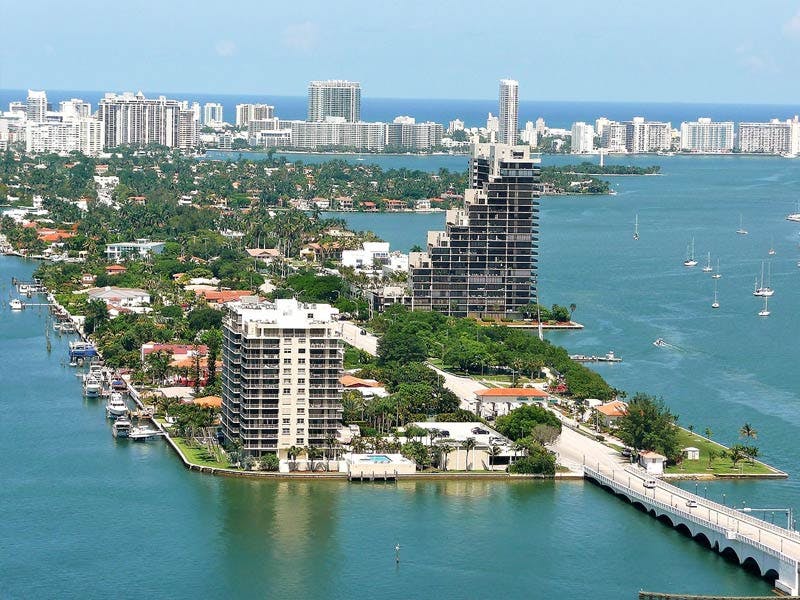 If you’re looking for a fun dog park, look no further than Venetian Islands’ Belle Isle Dog Park. This spacious park has separate areas for large and small dogs, and it includes drinking fountains for both you and your dog. Sit back in the shade while your dog makes some new fur-iends. Once you and your pet are through playing at the park, head over to Lido Restaurant and Bayside Grill or Full Bloom, where you can grab a bite to eat. Your dog is welcome to join you on the outdoor patio; just make sure to have a leash, as one is required. 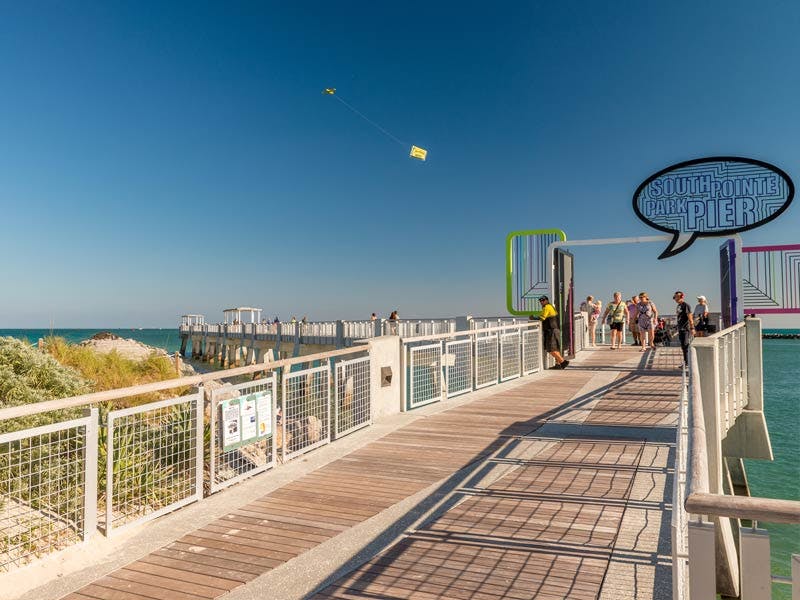 Miami Beach’s Southpointe community has plenty to offer you and your pup, including Washington Avenue Bark Park. This dog park offers two separate areas: one for small dogs and another for large dogs. Between plenty of shade and the water fountains, you and your pet will have no trouble staying cool. After you’re done at the park, check out one of Southpointe’s numerous dog-friendly restaurants, including Prime 112, Café Mistral, or Monty’s Sunset. Leashes are required at all restaurants. No matter what type of food you’re craving, Southpointe is sure to have something you’ll like. Bone Appetit! 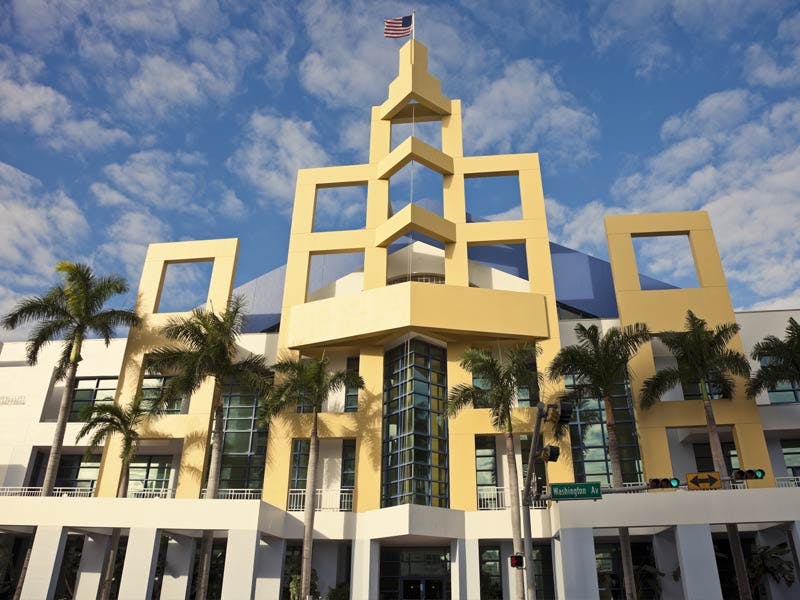 Everyone likes flowers, and that includes your pup, so grab his leash and head over to City Center’s Miami Beach Botanical Gardens. Explore this urban landscape, which spans over two and a half acres, on a self-guided tour using your smartphone. If you’d prefer, guided tours are offered every Saturday at two in the afternoon, and your guide will be more than happy for Fido to join you. The botanical gardens have several walking trails with views that simply can’t be beat. A leash is required, as is good behavior; the park also requests you make sure to clean up after your pet. 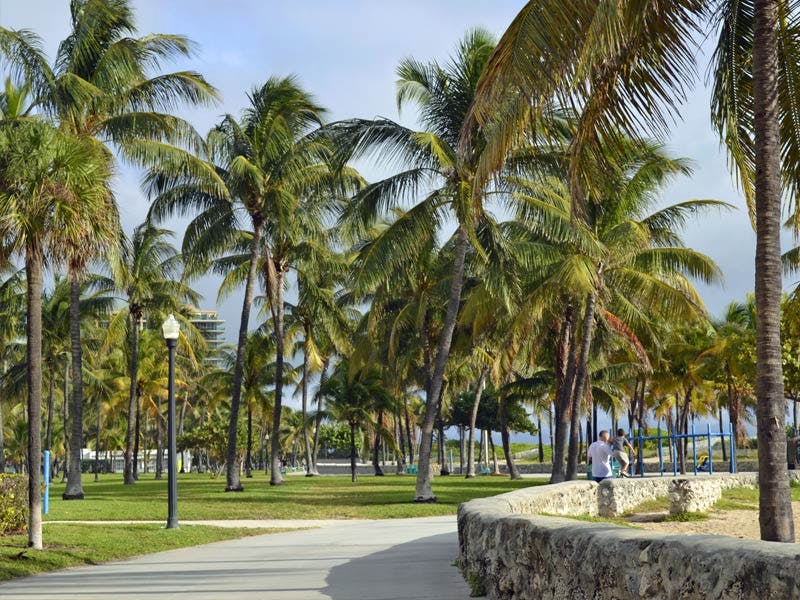 If you’re looking for a place to eat with your best four-legged pal, Miami Beach’s Flamingo-Lummus is the place to be! Pelican Café is located inside one of Miami Beach’s fabulous hotels, and it prides itself on serving upscale American Cuisine. Your dog is welcome to join you on the outdoor lounge. If you’re looking for some amazing seafood, head over to A Fish Called Avalon, where your dog is always invited to dine with you at one of the restaurant’s numerous outdoor tables. Flamingo-Lummus has many other choices, so you’re sure to find something, regardless of how picky your taste buds may be.