If you are thinking about getting an English Springer Spaniel, you are indeed very lucky.  These dogs have lots of energy, so they require your time and attention, however, you couldn’t have a more loyal four-legged friend.  The American Kennel Club indicates that this breed is friendly, obedient, and playful, and these are certainly personality traits of the English Springer.  They make very handsome pets with their large floppy ears and kind expressions with their dark, trusting eyes.  Name inspiration for the English Springer Spaniel can be drawn from the appearance or history of the breed, but if you’re not quite sure what to name your new addition and need ideas, you should certainly read on.

As this breed is ranked as the 26th most popular breed in America by the American Kennel Club, it’s no surprise that an English Springer once lived in the White House.  President George W. Bush owned an English Springer Spaniel named Spot ‘Spotty’ Fetcher, inspired by former Texas Ranger’s baseball player, Scott Fletcher. This is a fantastic name for a pooch, and it’s certainly one that sticks in the mind if you want an unusual name.

English Springer Spaniel, Theo, is a true embodiment of how hard working, loyal and loving this breed can be.  As a working dog for the British Army, Theo and his handler, Lance Corporal Liam Tasker, worked together tirelessly locating bombs in Afghanistan as part of their first tour.  Tasker had transferred to the Royal Army Veterinary Corps in 2007, and was assigned to the 1st Military Dog Regiment.  Theo was the third dog assigned to Tasker as the first two didn’t work out.  Sources say that the duo were well-matched, and they were a very successful team during their 5 month tour and located a record number of bombs.

Due to their success their stay was extended by a month, and it was then, when on Patrol with 1st Battalion Irish Guards, that they found themselves under fire by Taliban forces, and a sniper killed Theo’s handler.  Troops took Theo back to base, but he suffered a major seizure and died, just hours after his team mate.  Autopsy reports were inconclusive, but sources suggest that it was the trauma and stress of his handler’s murder that caused his deadly seizure.

In October 2012, Theo was awarded the Dickin Medal to honor his service.  The Dickin Medal is awarded to heroes and is said to be the animal equivalent of the Victoria Cross.  The ceremony actually ran at the same time as the launch of the poppy appeal for that year, which is of course very fitting.  It was accepted by a fellow sergeant and his detection dog, Grace.

This clever breed appears in an animated children’s TV show, too.  Midnight Patrol: Adventures in the Dream Zone, is a series of stories about an English Springer Spaniel named Potsworth who patrols dreamland with four children who have special powers.

There are lots of considerations to think about when choosing a name for your English Springer Spaniel.  Coat color is one consideration to make.  A name like Ginger, Rusty or Sandy could be a good choice.  Often the English Springer is more than one color, so Patch could be a suitable name, as is a name like Spot or Spotty.  This breed typically has high energy levels and because of this fun trait names like Bullet, Jolt and Rocket could be strong contenders.  This gorgeous canine is also a beautiful breed; a name like Precious or Duchess could be inspired by their looks.

If you are inspired by the bravery of the featured famous English Springer Spaniel, Theo could be just the name to choose. A military name like Major, Sergeant, or Corporal would be great for the confident canine that likes to lead.

If you still haven’t found the perfect name for your pooch, you should check out the lists below.  Why not make your own lists of the ones you like and then you can go back to them later?  You might also want to show your favorite names to family and friends as they could help you to decide.  It's important to choose a forever name carefully and ensure it suits your dog.  Why not call out the title you like to your pet and see if they respond?

My family and I have to cats Reece and Peanut so buttercup seemed to fit perfecty! 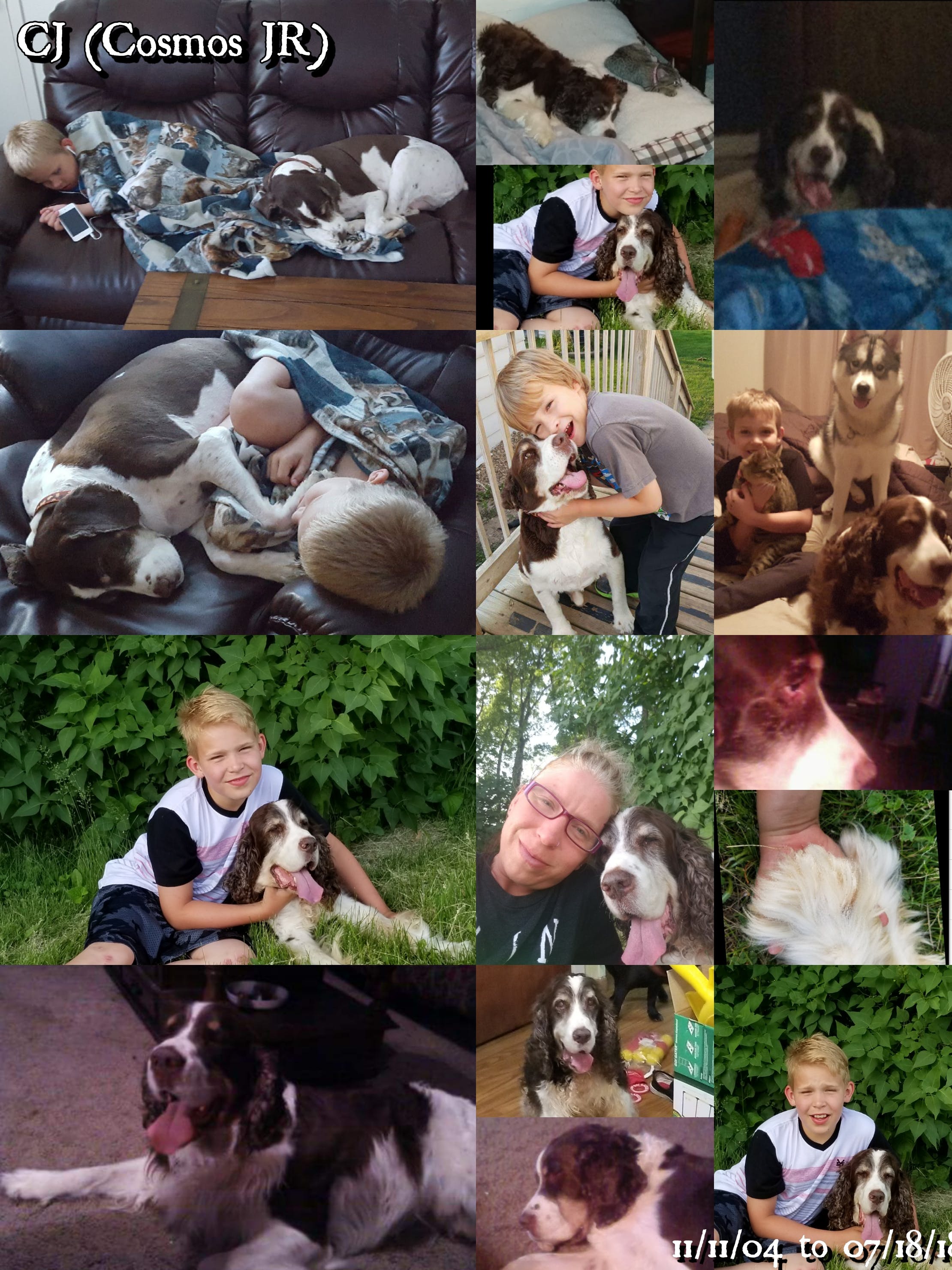 My ex husband had a dog named Cosmos. Cosmos was 17 years old when he passed away. My ex was so heart broken. I found a English Springer Spaniel that was liver and white which ended up being liver tri. My ex picked him out and was going to name him Cosmos Jr or Draco. After thinking about it he named him Cosmos Jr. Which became CJ and a nickname of new new b. I was pregnant with my oldest at the time. When my oldest was born and we came home from the hospital he because his protector and best friend. He loved all kids and didn't mind the ear pulling or climbing on him. CJ was family not a dog. In July we had to put him down. Was the hardest day of my life to have to say goodbye to my big baby. 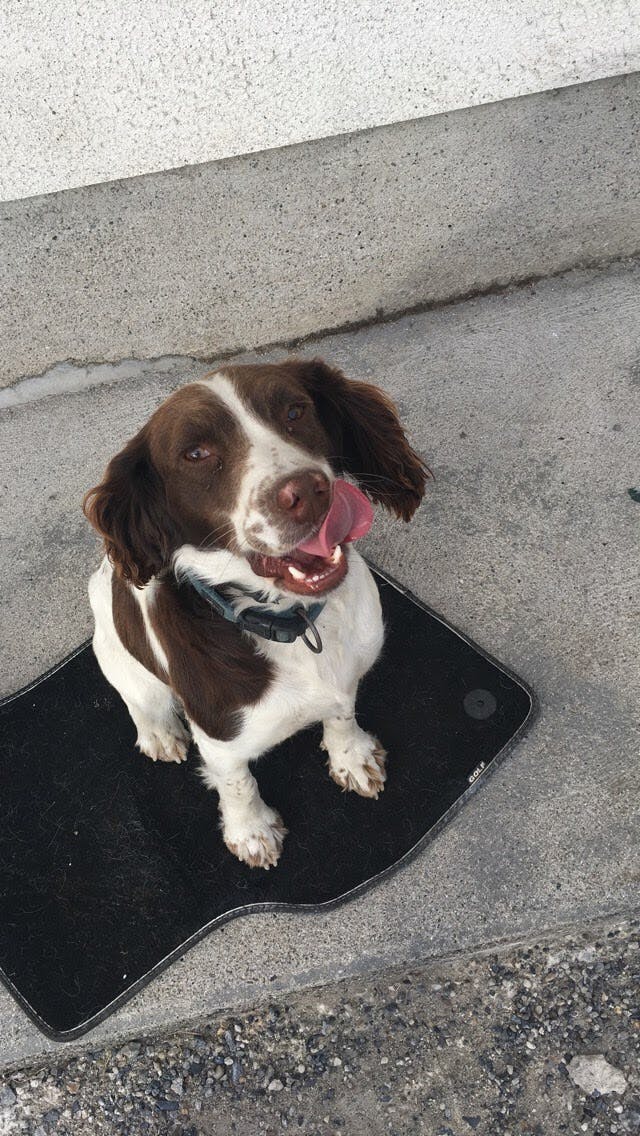 Murphy is primarily a popular Irish surname , my grandmother was a Murphy so decided to incorporate our heritage into our rescue dog. He is a purebred springer spaniel , there was no option for that breed above

i have always wanted a son called