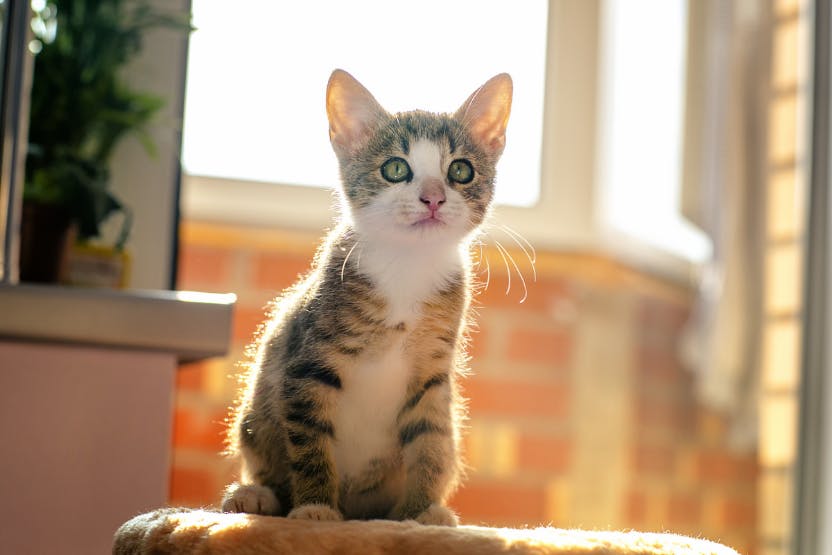 Congenital conditions in kittens are those that are present at birth, even if symptoms don’t appear until later in life. Some may be hereditary, while others may be caused by environmental factors, nutritional deficiencies, or trauma during a mother cat’s pregnancy. In many cases, a combination of these factors can be the cause of congenital abnormalities.

Of all domesticated animals, cats have the lowest incidence of congenital conditions, but they still occur. Whether raising a litter or a single kitten, keeping an eye on their development can alert you to any congenital complications, which in some cases, can be fixed if caught early enough. Let’s take a look at the most common congenital conditions in kittens to help you keep your baby felines healthy and address any issues as early as you can.

Cerebellar hypoplasia most often occurs in kittens whose mothers have had feline panleukopenia during pregnancy. The disease is most often caused by the feline parvovirus, which infects unborn fetuses and affects their cerebellar development in the brain. The resulting condition impacts balance and control in the kittens, who experience tremors when they try to walk. Cerebellar hypoplasia is not a life-threatening condition, and cats often compensate for it as they grow.

While in the uterus, fetuses may experience factors that can cause or influence the development of cerebellar hypoplasia. The condition may affect only one kitten or the entire litter. Causes include:

The severity of the condition depends on the stage of cerebellar development when the infection occurred, as well as how much and what areas of the cerebellum were infected.

A veterinarian doing a routine wellness visit shortly after a kitten is born may notice symptoms of cerebellar hypoplasia, or a pet parent may report tremors and lack of coordination at home. There is no standard blood test that provides a diagnosis. However, an MRI (magnetic resonance imaging) may detect a smaller-than-normal cerebellum in affected kittens.

Since the condition is a brain development abnormality, there is no treatment that will cure it. Afflicted kittens may need a few adaptive changes in the home environment to ensure their safety and ability to eat. They should also be indoor cats to prevent falls or attacks caused by their inability to move and jump normally outdoors. Most cats adapt to the disorder and live long, relatively normal lives.

Patent ductus arteriosus is a congenital condition in which a pre-birth passage in the heart fails to close off normally at birth. The passage, or ductus arteriosus, shunts blood between the two sides of the heart, bypassing the kitten’s lungs. The mother cat’s lungs oxygenate the blood via the placenta and return it to the kitten’s circulatory system.

Symptoms in PDA result from poor oxygenation of the kitten’s organs. If the opening is small, kittens may have no obvious signs, but an examination by a veterinarian will find the following:

Symptoms of a severe, large opening in the heart will result in:

Patent ductus arteriosus has hereditary origins, but maternal factors may contribute to its formation. These can include:

While examining a young kitten, a veterinarian may feel chest vibrations with each heartbeat, and hear an audible murmur when listening with a stethoscope. Pet parents may report some of the obvious outward symptoms as well.

For a definitive diagnosis, the vet may order chest X-rays, an echocardiogram and a cardiac ultrasound. Blood tests will demonstrate signs of anemia (low red blood cell count) and low hemoglobin, which indicate poor blood oxygenation.

Treatment of a patent ductus arteriosus requires closure of the opening between the right and left sides of the heart. Open heart surgery to directly see and repair the ductus requires anesthesia and is quite invasive, and carries the potential for serious complications. The second option takes place during cardiac catheterization, which is less invasive. A catheter carrying an obstructive object is threaded to the ductus and deposited there. Eventually, clots form around it, closing the deformity.

Congenital megaesophagus is a rare type of megaesophagus, a condition in which the tube leading from the mouth to the stomach stops working properly. Nerves from the brain normally trigger the swallowing reflex when food or liquid enters the esophagus, but with megaesophagus, the nerve signals are interrupted and the food stays trapped, causing the tube to dilate (enlarge). Sometimes so much food or liquid accumulates that the kitten regurgitates it, or it can spill over into the lungs, causing pneumonia.

There is a genetic factor that causes susceptibility of certain kittens to develop congenital megaesophagus, but the environment may come into play as well. The condition is most commonly seen in Siamese cats, which supports that genetic component. Other causes may include:

A history of symptoms from pet parents is typically the first sign the kitten may be experiencing congenital megaesophagus. Upon examination, the veterinarian will listen for altered bowel sounds, note the kitten’s weight, and look for other symptoms. There is no blood test that will definitively diagnose the condition, but a chemical panel may reveal signs of causative factors such as myasthenia gravis, a condition affecting communication between muscles and nerves.

Imaging is often helpful, including a chest x-ray with or without dye. A chest x-ray will also show the presence of respiratory problems like pneumonia. In some cases, sampling of the fluid that surrounds the brain and spinal cord will be useful.

Treatment focuses on improving the cat’s functional ability to swallow. Feeding with the cat upright may alleviate regurgitation, either seated in your lap or with an elevated food station that requires that they stand upright on their hind legs. If possible, they should be held in an upright position for approximately 15 minutes after feeding. In cases where regurgitation continues, a feeding tube may be necessary.

If pneumonia is present, it is treated with antibiotics and supportive care. Medication may also be given to improve gastric motility. Follow-up visits and imaging will help assess the effectiveness of treatment

Spina bifida is a developmental condition involving the spinal column and spinal cord. It’s commonly discovered at or shortly after birth and is the result of an incomplete formation of the bony spinal column that leaves a part of the cord exposed. The physical signs tend to involve the lower (lumbar) region of the spine but may occur in the chest or neck as well. Continued exposure can lead to trauma and degeneration of the spinal cord, with symptoms that are common in spinal cord injuries.

Except for visualization of the exposed cord, newborn kittens may not show obvious signs of the condition because it doesn’t hinder their movement. If the deformity is severe enough, pet parents may be able to see or feel it. Sometimes a thin layer of soft tissue lies over it, obscuring it and making it less likely a pet parent will notice it. When the kitten begins to walk around 3 weeks of age, some of the following symptoms may appear:

Spina bifida is a hereditary disease particularly present in tailless kittens like the Manx. It arises from both genetic and environmental factors:

In some kittens without clinical symptoms, no treatment is necessary. In cases that require an intervention, surgery may be performed to repair or replace the gap in the tissue covering the spinal cord. Physical therapy may be useful to increase function, especially after surgery.

Signs of inflammation or infection may be treated with antibiotics and supportive care. Ongoing monitoring by the veterinarian will be necessary.

The liver is responsible for ridding the body and blood of toxins built up during normal organ functioning. In hepatic encephalopathy, the liver is unable to remove toxins from the blood because of a congenital defect in the blood vessels leading to it. The toxins are allowed to circulate throughout the body, including to the brain, causing serious central nervous system illness.

Symptoms of hepatic encephalopathy include those of liver failure and the effects of toxins in the brain, including:

When hepatic encephalopathy is congenital, the cause is a congenital shunt malformation that impairs the flow of blood to the liver, causing it to function poorly. The result is that toxin-laden blood circulates throughout the body.

A veterinarian will arrive at a diagnosis through analysis of the kitten’s medical history including symptoms, their onset, and severity. In addition to the exam and history, the vet will order blood and urine tests to rule out other conditions and confirm liver damage, and imaging, including X-rays, ultrasound, and a MRI or CAT scan to visualize shunts and other abnormal structures in the liver. A liver biopsy may also be needed.

Kittens with hepatic encephalopathy are very ill and will require a hospital stay. Treatment can include intravenous fluids for dehydration and electrolyte imbalance, antibiotics and anti-toxin medications, and a modified diet that includes probiotic foods such as yogurt. Surgery to repair the abnormal shunt may be performed. Your vet may also prescribe an avoidance of medication that may damage the liver further.