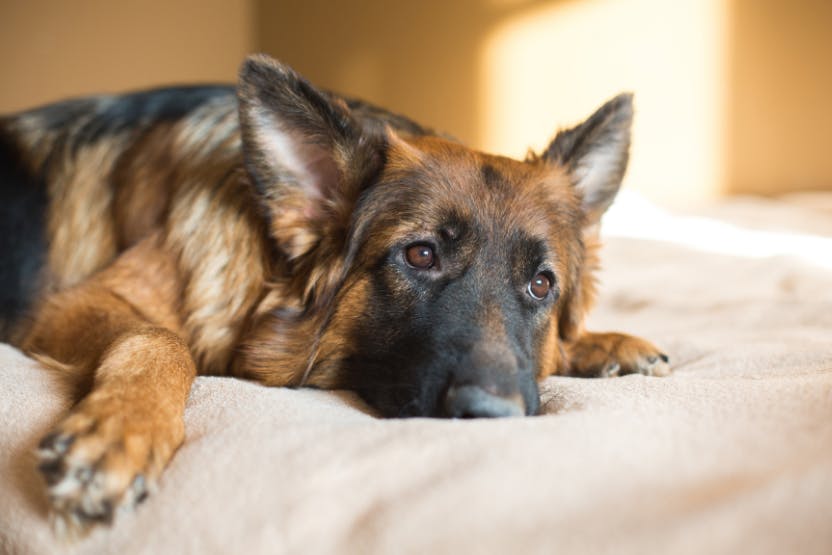 Neurological conditions in dogs are categorized into those that arise either from the brain or the spinal cord. While conditions of the nervous system can be caused or made worse by several factors, such as the environment, infections, or injury, genetic susceptibility among purebred dogs is notable in several purebred dogs.

Is your purebred likely to show signs of a neurological problem? Read on to find out about five of the most common conditions involving the brain and spinal cord to see if your pup is at risk.

Epilepsy in dogs is a condition defined by seizures of varying length and intensity. It’s a disorder of abnormal neural connections within the brain. There are two types of epilepsy: idiopathic and symptomatic. Idiopathic epilepsy has no identifiable underlying cause and has a genetic base, although other factors may contribute to it as well. Between .5 and 5% of all dogs experience idiopathic epilepsy, and it occurs more often in certain breeds like German Shepherds, Poodles, and Dachshunds. Males are slightly more affected than females and symptoms first appear between one and five years of age.

The seizures in symptomatic epilepsy are caused by underlying brain lesions due to certain conditions such as hydrocephalus, stroke or metabolic imbalances.

Epileptic seizures are categorized as either generalized or focal. Generalized seizures involve the entire brain, whereas focal seizures are confined to one area of the brain. The resulting symptoms will vary according to the type of seizure, and may include:

The cause of idiopathic epilepsy is widely thought to be based in genetics, and the tendency to develop the condition is more likely in certain breeds. There is no identifiable underlying cause, but some environmental factors may trigger its onset.

Symptomatic epilepsy may be caused by one or more of the following:

To arrive at a diagnosis, the veterinarian must identify the type of epilepsy, and identify or rule out underlying causes. A medical history and physical exam are the starting point, followed by blood tests, including chemistry and metabolic panels.

Imaging with x-rays, MRI (magnetic resonance imaging) or CAT scan (computer-assisted tomography) will visualize abnormalities in the brain. An examination of the fluid surrounding the brain via spinal tap will also assist in making the diagnosis.

The central aim of treatment is to control the frequency and severity of the seizures. In idiopathic epilepsy, treatment consists of anti-epileptic medication. Pups are often given phenobarbital and potassium bromide for their anti-seizure properties. If these aren’t effective, the vet may prescribe anti-epileptic drugs levetiracetam, zonisamide, gabapentin, or pregabalin.

If there is an underlying cause, treatment focuses on management. This may include antibiotics or antivirals, fever-reducers, or anti-inflammatory medication. If a tumor is present, surgery may be performed. Metabolic disorders are treated with medication.

Acupuncture has been shown to be helpful in the management of seizures. Ongoing monitoring is necessary throughout the dog’s life. It’s often recommended that dog parents keep a journal of seizure episodes to assist in medication adjustments or other treatments.

Degenerative myelopathy is a disease that affects the spinal cord. It occurs in adult dogs older than eight and has no gender preference. It’s progressive, which means it doesn’t recede or go away, but measures to slow its progression and lengthen the life of the dog are available.

Symptoms of degenerative myelopathy at first resemble osteoarthritis or hip dysplasia. As it progresses, other symptoms appear. Hind limb weakness and paralysis result from degeneration of the spinal cord’s white matter. Symptoms can include:

The exact cause of degenerative myelopathy in dogs isn’t clearly known, but potential causes are:

Diagnostic testing includes analysis of the cerebrospinal fluid, myelograms (muscle x-rays with dye), and a CAT scan or MRI. Nerve and muscle biopsies may reveal shrinkage and other abnormalities.

Because there is no cure for degenerative myelopathy, treatment is geared toward optimizing the dog’s general health. Treatments can include medications such as anti-inflammatories, steroids and aminocaproic acid, as well as vitamins. Physical therapy has been shown to prolong the dog’s survival time and allow them to get around longer. Aminocaproic acid medication is controversial and may or may not effectively treat the condition.

The spine is constructed of bone that surrounds and protects the spinal cord, which transmits sensory and movement impulses to and from the brain and muscles in the body. Between each section of bone, or lamina, is a spongy structure composed of a fibrous thick ring on the outside and an inner pulpy nucleus. These discs provide a cushion between the bony sections and allow the back to move up and down, and side to side.

In degenerative disc disease (DDD), the outer ring deteriorates, which results in the inner disc protruding or even rupturing. While injuries are not often known to cause DDD, the condition itself makes the spinal column more susceptible to injury. When the disc is damaged, its tissue presses on the spinal cord causing pain, and partial or complete paralysis. This can happen slowly over time, or suddenly, causing a lot of discomfort. It tends to occur in the mid-to-lower back (lumbar region), but it can also affect the neck. While symptoms of degenerative disc disease are very similar to those of Intervertebral Disc Disease, which is a common part of the normal aging process, the causes of each condition are different.

Symptoms vary depending on where the degenerated disc is located. If the location is in the middle or lower back:

If the neck vertebrae are involved, symptoms are typically:

In 95% of dogs, symptoms are caused by degeneration of the disc and pressure on the spinal cord. Other rare causes may include:

The veterinarian will want to collect a complete history of symptoms, after which they will perform a physical examination testing reflexes and pressing on the spine to determine if there’s pain. X-rays, a CAT scan, and/or an MRI will assist with locating and visualizing the site of the damaged disc and identify another cause. A myelogram with dye under anesthesia may provide greater detail. Tests will be performed to ascertain the dog’s overall condition.

Treatment is based on identifying the stage of the condition. Stages range from Stage I to Stage V, and in dogs, they tend to overlap. Stage I (mild pain) is usually self-correcting and may need no specific treatment. Stage II (moderate to severe pain) and Stage III (partial paralysis) require anti-inflammatory drugs, pain relievers, and exercise restriction. If these don’t provide improvement after four to seven days, surgery may be necessary to repair or remove the affected disc and relieve pressure on the spinal cord.

Surgery is indicated for Stage IV (paralysis but normal sensation), and immediate surgery needs to be done for symptoms of Stage V. These include loss of feeling and paralysis. The treatment goal is to relieve pressure on the spinal cord. If all or part of the disc needs to be removed, a window (fenestration) is cut through the bone and the disc material is extracted through the opening.

The term “vestibular” is related to the inner ear, which contains delicate nerves that affect balance and equilibrium. These nerves are connected with the nerves in the spinal column and brain. In most cases, movements of the head can result in abnormal eye movements and dizziness.

Vestibular disease may follow an ear infection, cold, or may be related to hormone problems. It usually appears suddenly, especially among older dogs. This is why it's sometimes called old dog vestibular syndrome, or it may be known as canine idiopathic vestibular syndrome.

Symptoms of vestibular disease may appear like those of a stroke. It affects a dog’s ability to walk and may cause stumbling or falling on uneven surfaces. Other symptoms include:

There are several precursors to vestibular disease in dogs. For example, it may follow an ear infection or a sharp fall involving the head. The nerves and “hairs” in the inner ear are subject to disruption, and a change in pressure may disturb balance. Once the vestibular hairs settle back to their normal position, the dizziness goes away.

Other causes may include:

A neurological exam, including testing of reflexes and observation of the dog while walking will be performed if this condition is suspected. In addition, an X-ray, CAT scan, and/or MRI is performed to visualize the ears and brain, along with an examination of the cerebrospinal fluid to detect infection. A blood pressure reading will be taken to determine any effect high or low blood pressure may have on the dog’s equilibrium. In addition, a BAER (Brainstem Auditory Evoked Response) test will reveal any abnormal connections involving the auditory channels within the vestibular system.

Treatment focuses on supportive care and relief of symptoms. Intravenous fluids will be administered in cases of dehydration, and antibiotics may be given if an ear infection is suspected. Antioxidants and essential fatty acids to help the healing process may be prescribed, along with a medication to improve the brain’s ability to compensate for abnormalities. Close monitoring and reporting by the pet parent enable the veterinarian to evaluate and manage progress.

Wobbler syndrome, also known as cervical spondylomyelopathy, most often affects large breeds such as Doberman Pinschers, Great Danes, and Rottweilers. It causes painful compression of the spinal cord at the neck resulting in an awkward, wobbly gait. It also affects the sensory nerves so that the dog can’t feel their feet or their position on the floor. It affects the hind limbs first and progresses to the front legs.

Symptoms of wobbler syndrome are the result of pressure from spinal lesions on the cervical (neck) area of the spinal cord. They include:

While there is no clear cause of wobbler syndrome, it’s considered a genetic disease because certain breeds tend to exhibit symptoms. Some believe that rapid growth in some of the larger breeds could cause it or make it likely that the genetic tendency is triggered. Causes include:

Assessment will begin with general and neurological examinations to rule out other causes of the syndrome. These are followed by X-rays, possibly a myelogram, and/or an MRI. The MRI provides the most reliable results, although a CAT scan may also be performed.

Treatment is aimed toward improving the dog’s symptoms. Corticosteroids are administered, typically for four to eight weeks. About 50% of treated dogs improve with steroid treatment alone. Surgery to relieve the pressure on the spinal cord by fusing unstable vertebrae provides relief in about 80%.

Rest and restricted activity for two to three months after surgery help with pain and avoid injury. Pain medication may be given as well. If the pup is not able to walk, they should be provided with soft bedding, periodic turning to prevent bedsores, manual emptying of the bladder and bowels, and physical therapy to maintain range of motion.