What Are the Symptoms of Poisoning in Dogs? 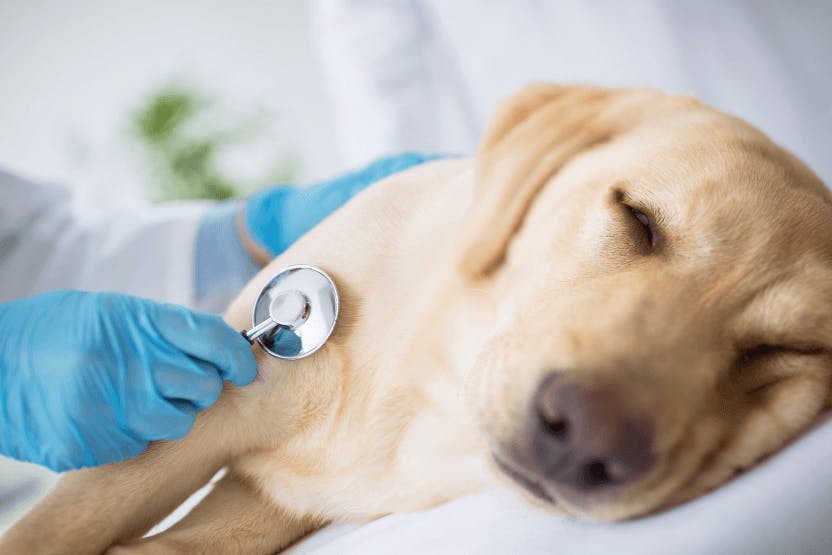 Dogs are mischievous creatures with an insatiable appetite and a fascination with things that don’t belong to them. These character traits often lead to dogs eating things that they shouldn’t. Dangers lie around every household, from the xylitol in toothpaste to phytotoxins in plants, so parents must familiarize themselves with the signs of poisoning and know how to react if they see these signs in their pet.

Read on to learn how to spot symptoms of poisoning in dogs, what to do if your woofer comes in contact with a poisonous substance, and which common household items to watch out for.

Common causes of poisoning in dogs

Dogs are sneaky creatures, and they can get ahold of toxic substances in the blink of an eye. Even vigilant pet parents may find themselves rushing their pupper to the vet after them digging in the garbage or sniffing around in the cleaning cabinet. Here are some of the most common causes of poisoning in dogs to watch out for:

What are the signs of poisoning in dogs?

Different toxins cause different symptoms. Some toxins, like alcohol and household cleaners, cause primarily neurological symptoms, whereas other toxins, like antifreeze and some plants, mainly affect the kidneys. Milder toxins like onion or chocolate consumed in small amounts may only present gastrointestinal symptoms, like nausea and diarrhea. However, larger doses can affect the cardiovascular system and may even be fatal.

Below are some common signs of poisoning in dogs. Keep in mind that the exact symptoms a dog exhibits will depend on the dog’s size, the type of toxin, and how much of the toxin was ingested.

How long does it take for a dog to show signs of poisoning?

The time it takes for a dog to show signs of poisoning will depend on the toxin. Some toxins cause reactions right away, while others cause symptoms several hours or days later.

For instance, the first symptoms of antifreeze poisoning can appear in as little as 30 minutes, whereas the symptoms of chocolate poisoning take between 6 and 12 hours to show up. Despite the potency of anticoagulant rat poisons, it can take 3-5 days after ingestion for dogs to show symptoms.

How do you flush poison out of a dog's system?

Unfortunately, there is little owners can do at home to treat poisoning in pets. However, veterinarians have a few methods they can use to flush the poison from a dog’s system. When formulating a treatment plan for their patient, vets will consider the following factors:

Once the vet establishes the type of toxin they’re dealing with and the severity of the case, they will perform one or more of the following treatment protocols.

Fortunately, there are antidotes for some of the more common canine toxins, like anticoagulant rat poison and ethylene glycol (a toxic ingredient in some types of antifreeze).

If a vet determines a dog has consumed a dangerous amount of antifreeze, they may administer fomepizole, an intravenous antidote that inhibits the breakdown of ethylene glycol and reduces the risk of organ damage. The bad news is this is a very costly treatment, and the dog may require hemodialysis in addition to the antidote. It’s also important to mention that this drug isn’t as effective when given more than 12 hours after antifreeze ingestion.

If a vet suspects a dog has consumed an anticoagulant rodentcide, they will give the dog vitamin K1, which will help restore platelet function. ACR rodenticides have a very long half-life, so most vets will continue vitamin K1 therapy for several weeks.

If the dog is brought in right away, vets may be able to induce vomiting to remove the toxins from the dog’s stomach. However, vomiting typically needs to be induced within 2-4 hours of ingestion to work, and even then, there's no guarantee that the dog will be able to regurgitate all the toxins.

Unfortunately, most cases of poisoning go unnoticed until the dog starts showing symptoms. And since it can take hours or even days for symptoms to arise, by the time dogs get to the vet, inducing vomiting may no longer be an option.

Likewise, if a dog ingests a caustic substance (like bleach or drain cleaner), vets will not induce vomiting since this can cause further damage to the dog’s esophagus.

Gastric lavage, or stomach pumping, is another way vets can remove toxic matter from a dog’s stomach. Vets often perform this procedure in cases where induced vomiting is ineffective or counterproductive due to the nature of the substance ingested.

During a gastric lavage procedure, the vet will flush the stomach with water and drain the stomach repeatedly to remove as much of the stomach contents as possible. This procedure is done under anesthesia. Vets will usually administer activated charcoal before completing the procedure.

Poisoning often causes severe gastrointestinal symptoms. Some dogs will require a bland diet during recovery to prevent excess strain on their digestive tract.

Depending on the substance ingested, vets may suggest early dialysis for the poisoned pet. This procedure is particularly effective against alcohol and ethylene glycol poisoning and can prevent or minimize kidney damage. During dialysis, the vet will hook the pet up to a dialyzer, which extracts the blood, filters out the toxins, and returns the filtered blood to the body. Unfortunately, this treatment is costly and not widely available.

Can dogs survive being poisoned?

Yes! Dogs can absolutely survive being poisoned, but the survival rate greatly depends on type of toxin, how much of it the dog ingested, and how fast the dog receives treatment.

Dogs who don’t ingest much of a toxic substance and those who receive treatment quickly generally have a better chance at survival. Depending on the type of poisoning, dogs may take weeks or months to recuperate, and some dogs may have permanent organ damage after recovery.

What should I do if I think my dog has been poisoned?

Time is of the essence when it comes to poisoning, so it’s best to be on the safe side and react quickly rather than taking the wait-and-see approach. Consult a vet if you witness your dog ingesting a known toxin. If your dog is showing symptoms of poisoning or is unresponsive, seek help from a veterinarian ASAP.

If you suspect your dog has eaten something toxic, follow these steps:

If your pet ingests something they shouldn't and you're unsure whether it's safe, use Wag! Vet Chat to connect with a veterinary professional who can offer you information about your pet's health.